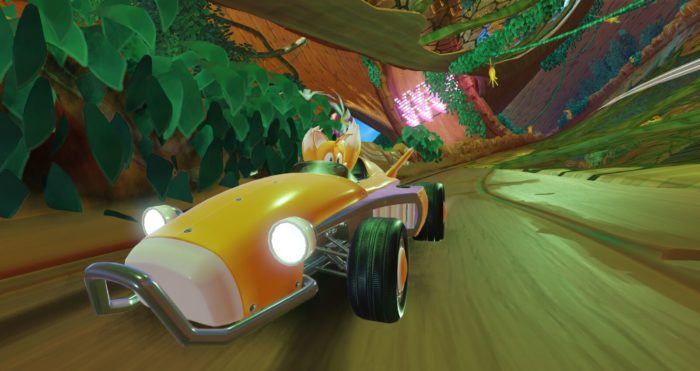 One of the most underrated series over the last two generations has been Sonic All-Stars Racing. Mario Kart gets all the love and attention, but those that have played the Sonic All-Stars games know that Sega has a worthy kart racing game of its own, too.

The most recent game in 2012 was great, but if a third game followed up with just tweaks here and there, I would imagine that the series would have started to appear stale. That might be an unfair thing to say considering Mario Kart doesn’t really change much from iteration to iteration, but the reality is that Sonic’s kart racing games just don’t have the built-in appeal and audience that Mario Kart does. Sega has to work a little harder.

Team Sonic Racing, despite feeling very similar, is quite a different game from its predecessors, hence the name change. The gameplay is balanced around team cooperation and team finishes. There are four teams of three in a race for a total of 12 racers, and even if you finish first, if your team is lagging behind, you’ll still lose the race. Your combined finish is what matters.

So, as a result, you’ll need to find ways to work as a team. The most direct way to do that is by sharing and boosting Wisp power-ups. If you have a Wisp in your possession, and don’t need to use it, you can pass it over to a teammate. When you do that, they’ll get a souped-up version of the original power-up. The more you and your team work together, you’ll charge up a team ultimate. This is a combined maneuver that will essentially fling your entire team up towards the front.

Mechanically, Team Sonic Racing feels almost identical to the last two games which again, is totally fine because one of the biggest sources of praise the series gets is how nice driving and drifting feels.

Honestly, what I’m most intrigued about is jumping into this game online. Team Sonic Racing is a novel concept, that should work, but it’s going to get dull playing with computer-controlled teammates and being at the mercy of the AI. On the other hand, I can see online play being a total blast as there is a lot of room for some nuanced strategy. You’ll need to keep track of where everyone on your team is, how to bring lagging teammates back up, when to share or keep power-ups. There is a lot going on.

Team Sonic Racing is going to feature a meaty amount of single-player content, and as long as the online portions follow suit, I’m quite excited for this next-gen Sonic kart racing experience.