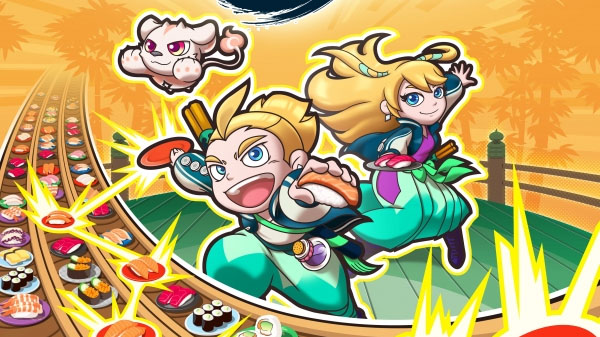 Sushi Striker: The Way of Sushido on Nintendo Switch

Even after hours of playing Sushi Striker: The Way of Sushido, I couldn’t believe it was a real game, published by Nintendo no less. I mean this in the best way possible, as Sushi Striker is utterly absurd in every aspect, but a ton of fun at the same time. It’s a surprising twist on the puzzle genre, and a game that has far more depth than you might initially think.

Sushi Striker casts you as a young orphan named Musashi, whose parents left to fight in the Sushi Struggles, a war fought over control of the world’s sushi (yes really). In the world of Sushi Striker, people battle by eating sushi and throwing the plates as weapons, and sushi itself has magical qualities. Musashi’s life is changed when he meets a mysterious man named Franklin and a sushi sprite named Jinrai, who introduce them to the wonders of sushi. From then on it’s Musashi’s goal to take down the Empire, who has a vice grip on the world’s sushi, and bring the wonderful food to everyone in the world.

Sushi Striker’s main story has you moving through a series of battles on a world map, similar to something like Mario Bros. The bulk of the game has you playing sushi battles against opponents, with your character on one side and the enemy on the other. You and the enemy each have three lanes that have a moving conveyor belt, with a shared lane in between. Different colored sushi plates move on these lanes, and the goal of battles is to link these plates together to have Musashi eat the sushi and create chains, which stacks the plates on the table in front of Musashi.

These plates are thrown automatically when your table fills up, or you can combo them together by pressing the X button. Eating enough sushi and linking plates will cause your character to enter “Sushi Jubilee” mode which boosts your sushi into stronger and rarer types for a limited time. Of course, all of this applies to the enemy as well. You can use either the touchscreen on Switch or your controllers to do everything in battle, but I honestly found myself using a mix of the two to do everything quickly.

While this is the basic concept, things get far more complex from there. Different colored plates cause different amounts of damage, and as you progress through the game, battles start looping in more mechanics, like bombs that need to be picked up and thrown at an enemy, or they’ll damage you. Layering on top of this system is the sushi sprite system, Pokemon-like creatures that give you abilities to use in battle. Sushi sprites are instrumental in battle, and you can bring three into battle with you. They have various skills that are on a meter, charged by eating sushi. Each sushi sprite also has particular types of sushi that they bring into battle, meaning your team setup becomes a mix of choosing the best skills that work for you, while also finding sprites that have sushi that will work well together.

These systems all combine into a surprisingly complex battle system, and even past that there’s different equipment you can put on Musashi that change the speed of lanes or grant various other effects. Sushi Striker does a good job of implementing new mechanics throughout the experience, and layering on different obstacles or rules for battles to keep things fresh. Sushi battles themselves are fast-paced, frantic affairs, that require a keen eye and fast reflexes to link sushi plates together and cause the maximum amount of damage. You’ll also need to increase your Striker Rank to recruit certain sprites, something you can do by completing tasks and then going to Shrine Grove, an area that basically functions as a base of sorts.

While the Sushi Sprites aren’t nearly as complex as something like Pokemon, there is a leveling system that increases their stats, and the creatures can even evolve into more powerful versions. Both Musashi and the Sushi Sprites level up and increase in stats, and there are also items you can get that grant a chosen sprite XP or a boost to their skill. I quickly found myself surprised by how complex Sushi Striker’s systems are, and while the battles can grow repetitive after a while, the new twists on gameplay help keep things interesting. There’s a decent variety of sprites as well, allowing for a ton of different strategies and tactics to use in battle, and you recruit more by performing well in battles.

There’s a lengthy experience to be had in Sushi Striker, with over 140 main story battles that can easily keep you busy for 10 hours, and a host of side areas to complete as well. Every battle gives you a rank and has three side objectives that can reward you with more XP, and eventually lead to aforementioned side areas if you complete enough objectives and earn enough stars. While single player is definitely the main focus, you do unlock the ability to play multiplayer partway through the game, although it’s odd that you unlock local play and online play at different points, and these options aren’t just available from the start.

Sushi Striker’s strangeness is amplified tenfold by its story and characters. The game constantly gets more ridiculous, with things like wasabi being used as a torture device, or how Sushido really is someone eating sushi with such poetry that they freeze anyone watching in place, as they stare on in awe. The story is mostly conveyed through visual novel-like segments that have characters talking. However, there are some fantastic anime scenes sprinkled throughout the experience. These cutscenes sport some great animation with full voice acting, feeling like clips ripped straight from a Saturday morning cartoon.

On the other side, though, many of the story segments feature partial voice acting, with characters only saying the first half of their line each time. This does feel strange at first, but that quickly changes as you fall into the rhythm of the game. The story told in Sushi Striker isn’t anything revolutionary, but it’s quirky fun that often embraces many tropes used in anime and video games. Most of the characters introduced are likable in their own strange ways, although a few just felt too overdone for my taste.

The game’s quirky sense of style is only reinforced by its aesthetic and soundtrack. It honestly reminded me of Splatoon, in that both of these aspects feel entirely unique to Sushi Striker. The game almost looks like some kind of web-comic in motion and has a soundtrack that’s an interesting mix of rock, pop, and everything in between.

I went into Sushi Striker expecting a fun puzzle experience, but I ended up getting something far more complex and engrossing. I found myself playing battle after battle, trying to get the best rank in each one while also trying to nab those sushi sprites that I knew would fit into my strategy well. Sushi Striker feels right at home on Switch, and is a great title to take on the go and play a bit here and there. I can only speak from my experience with the Switch version, of course, and not the 3DS one.

Sushi Striker is pure ridiculous fun, and while it leans heavily on its core gameplay loop, it manages to keep things engaging. Nintendo has proven they have a knack for the absurd, and Sushi Striker definitely feels like it could be the foundation of a new series.