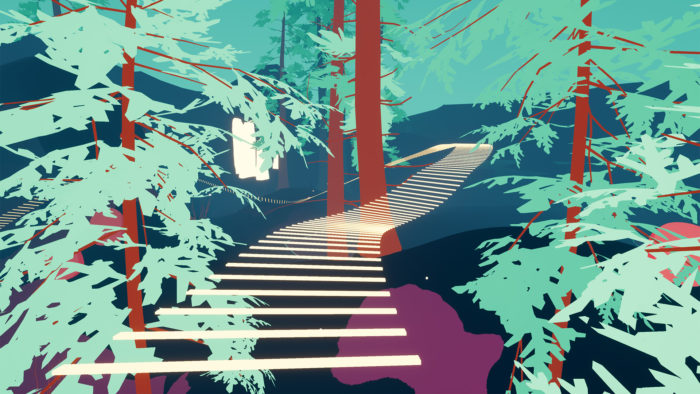 Shape of the World on PS4

Akin to games like Flower, Journey, or Abzu, Shape of the World is a colorful exploration title that truly attempts to relax the player through fluid gameplay. The goal is to make your way through a variety of areas by passing though triangle checkpoints that change the color of the environments whenever you do so. Clicking and destroying trees will launch you forward, and you can collect seeds that allow you to create trees in their place as well. Hitting sets of monuments also creates hovering pathways that greatly increase your speed and allow you to travel around areas quickly.

The first thing you are going to notice about Shape of the World is the amazing things it does with color. Our eyes perceive complementary colors seen at separate sides of the color wheel as extremely pleasing when they are paired together, and this games uses that fact to its advantage by always shifting the palette when a player goes through a checkpoint or collects a new set of seeds so a once familiar area will seem fresh and new while remaining pleasing to the eye. Oftentimes this can competently change the way you view an area, as when you first arrive it will resemble a forest, but once the color changes all of a sudden you’ll feel as though you’re underwater. This is further aided by the game’s fantastic music, which adapts to color changes effortlessly and melds perfectly with the environments whether it be the soft, twinkling notes in the beginning forest areas or more ominous tones as you make your way up a thin and steep mountain path.

The rest of the art aesthetic of this game meshes well with the sudden changes in color, with simple environments that provide a somewhat blank canvas for the colors to further pop and bring to life. The lack of detail here is crucial to why Shape of the World looks so good, and even the animals you’ll see during your travels are basic but also change color to match their environments. Like me, you might find yourself having a desire to snap a few screenshots during your playthough whenever you come to a particularly beautiful area.

It’s clear the game is attempting to incite a sense of cognitive flow within the player, wherein a sense of flow is felt due to a balance of game difficulty and skill requirement so it’s never too boring to play or requires so much skill it induces anxiety. Shape of the World starts out slow in this way, with the player walking around wider spaces at a slower pace with only trees to increase their speed. However, this sense of flow is extremely strong in the latter half of the game, when larger pillars allow you to launch yourself across an area and makeshift staircases unlocked by the player are more frequent and allow you to cross distances quicker and reach places previously unreachable. This makes the game overall a satisfying experience to play, and is a perfect title to unwind to at the end of a stressful day.

The gameplay also encourages the player to be contemplative. It’s very much like the game is built around the age-old philosophical thought experiment, “If a tree falls in a forest and no one is around to hear it, does it make a sound?” Since the player influences the world so much whether it’s by destroying trees to shoot yourself further, growing them by launching seeds, or changing the very color of the environments by progressing through the areas, this makes one consider both the delicacy and veracity of nature since it is so often influenced by the whims of humans. By adding symbolic meaning to the way in which you explore the game’s world, this adds depth and value to a game that needs it when the gameplay and environments are so purposefully simplistic.

However, the replayability of Shape of the World is weaker then it should be, especially considering it is such a short experience that has potential to be a title you pick up every few months for a quick playthough. Besides going back through to get all the different types of seeds, there is no real drive the play this game again for a while since the areas are all memorable with little to explore outside of the game’s basic path.

The seed collectibles found throughout the levels also felt as if they were missing something. It’s true in every new area the seeds create a new type of tree/rock formation when you plant them, but the game made a point to display an icon whenever you collected a new seed even though this doesn’t affect gameplay in any way. Essentially, all that really changed when you got a new seed was the icon in the corner, meaning there’s really no need for there to be an icon indicating the seed type at all. Besides simply not including that icon in general, an alternative idea would have been for the trees that you create with the seeds would be a slightly different color than the ones you find in nature so you could see the affect you were having on the world whenever you look back. This would further aid the game’s apparent theme of the human influence in nature, and feel more rewarding to the player whenever you did find a new seed as you would have a new color combo to try out against the game’s ever changing palette.

Shape of the World is the perfect game to pick up after a particularity stressful day at work, and promises to keep you engaged in its simple gameplay through a combination of gorgeous environments and immersive game physics. While it is a tad too short and lacks replayabilty, that first playthrough should be enough to take your mind off stressful everyday issues so you can drift around a colorful world where simply moving forward is the main objective.