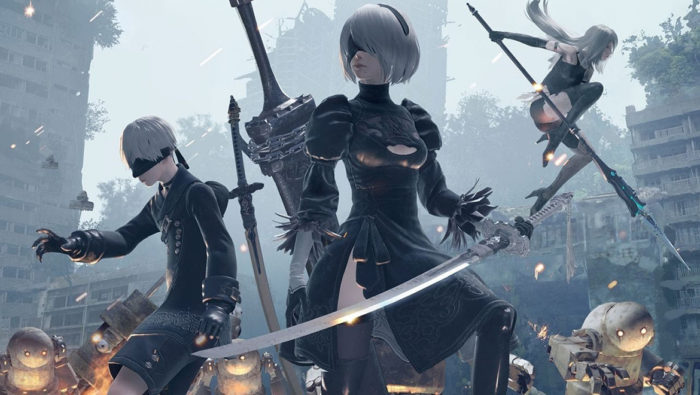 A little more than a year ago, NieR: Automata was released for PS4 and PC. I got to review it, and I called it a masterpiece that really pushed the boundaries of the video game medium in how stories can be told. A year later, it’s out for the Xbox One, and that statement still stands.

[Some small story spoilers ahead, nothing major but if you don’t want anything spoiled turn away]

NieR: Automata is a direct sequel to NieR, which originally released for the PS3 and Xbox 360. You don’t need to have played that game to enjoy this one (though you’ll miss some cool late-game references), but we’ve got a handy Drakengard/NieR lore guide ready if you want to catch up. Automata’s story takes place in the far future, where aliens from outer space have invaded Earth, and the humans are taking refuge on the moon. Earth is now overrun with machines created by the aliens, and the humans have chosen to create androids to combat the machine threat. The story follows YoRHa androids 2B and 9S, and along the way, they begin to question their purpose in life and what it means to be human. It’s also a story about 9S trying to convince 2B to call him ‘Nines,’ and learning why she refuses to give him the time of day.

Now I know what you’re thinking. We’ve already got tons of sci-fi stories about robots learning to be human. Detroit: Become Human tackles that idea with varying degrees of success, and the ever-popular Westworld is starting to reach a point where it’s almost impossible to tell the difference between a human and android. However, NieR: Automata doesn’t waste time in asking the tired questions. Instead of being a story about androids who question what it means to be human, it’s a story about androids who worship their human overlords and long for them to return and assume control. Automata explores the idea of artificial intelligence and sentience from a very different angle, rather than going down the good ol’ narrative path of robots rising up against their mortal creators.

It’s not just the story that’s interesting either. NieR: Automata stands tall as one of the most self-assured and confident video game I’ve played because of how it dares to take risks where gameplay is concerned, resulting in extremely stylish presentation and execution. One moment you’ll be running through your space bunker 2D side-scroller style, and in another you’ll be battling machine ships in a bullet hell segment or going through a visual novel segment with light decision-making elements.

And if you’re a fan of good music in video games, well, you’re in for an absolute treat with NieR: Automata. Not only does the game tell its story through gameplay, it’s also one of the very rare titles that writes music and sound design into its DNA. You’d be surprised at how effective the game is at conveying messages and making the player feel a certain way through the use of its soundtrack. It certainly doesn’t hurt that the music itself is so damn good.

Now, as much as I’d like to call Automata a perfect game, sadly it just isn’t. The game’s biggest flaws lie in its combat elements. Despite being developed by Platinum Games, the combat in Automata feels very simple and somewhat mind-numbing on normal difficulty. Don’t get me wrong; it looks extremely cool and flashy, but most combat encounters usually boil down to button mashing, which isn’t always fun. This doesn’t mean that the game gets enjoyable on higher difficulties either, because when you start playing on hard mode, you’ll soon find that Square Enix and Platinum really haven’t done a good job of balancing the game across the difficulty settings. On normal, it’s mind-numbing. And on hard mode, it’s like pulling teeth.

Thankfully, this is an issue that gets alleviated slightly later on in the game, when a new combat mechanic gets introduced. But for the most part, the combat is just serviceable, and if you’re looking for a good action game, you’re just not going to find that here.

Playing through the game again on the Xbox One, I found myself drawn into the game’s world and its characters all over again. 2B and 9S share a wonderful rapport with each other, and even the side characters (shout out to the GOAT, Operator 6O) are plenty charming on their own, with well-written dialogue that players can relate to. The game runs beautifully on the Xbox One, maintaining those stable 60 frames per second every step of the way. If you don’t have a PS4, and aren’t willing to put up with the game’s subpar PC port, this is the way to go. The Become As Gods Edition on Xbox One also comes with the extra DLC combat arena pack, so if you haven’t played it already, now’s the time to do so.

NieR: Automata isn’t going to be for everyone. The combat could be better, and not everyone’s going to enjoy some of the more over-the-top elements of the story. Still, it’s hard not to be at least a little impressed by how ridiculously daring this game is. If you have even a passing interest in a post-apocalyptic sci-fi story that makes full use of the video game medium and all it has to offer, give this a shot. Glory to mankind.