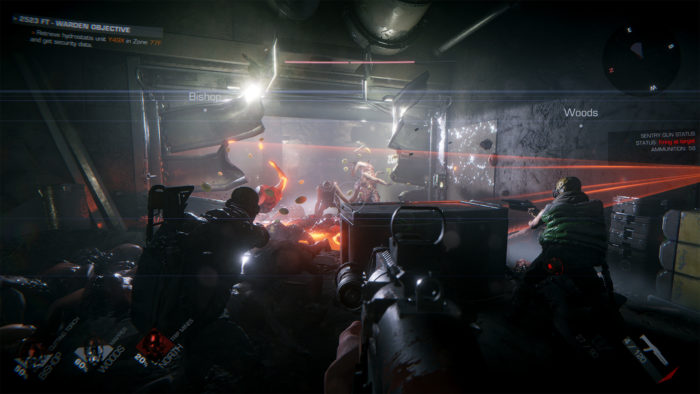 Developer 10 Chambers’ anticipated four-player co-op game GTFO is a terrifyingly atmospheric, intense, and nerve-wracking shooter that will test your mettle. I’m told before my hands-on demo at E3 2018 that of the 15 or so journalists that had stopped by to check the game out, none had reached the end. I’m up for the challenge, but five minutes into my own session and I was already struggling.

Asked to punch-in the command “HIRE” on one of the level’s computer terminals, I somehow went blank and typed “HIRER.” I’m not very good under pressure, apparently… or maybe I just can’t spell without autocorrect switched on? Whatever the reason, GTFO’s dark corridors and the spooky creatures that threaten to tear me to shreds clearly got under my skin. What I absolutely do know for certain is that after moving past that little moment, I enjoyed every damn second of my GTFO experience.

I was briefed on GTFO’s story before playing, but nothing more than what was highlighted in last year’s gameplay trailer reveal: four characters find themselves trapped in a prison-like stasis. They do not know why, and they do not know their captors. Each night they are shot down a funky, tube-like elevator to the depths of an underground facility. This grim industrial setting is a maze of corridors and sealed shafts locked by various computer terminals. Oh, and it’s infested with alien creatures that’ll hunt you down like dogs at the slightest drop of a coin or accidental flash of a light. Your job is to escape these eerie confides; your reward is to have the whole nightmare repeat itself again and again.

My demo begins with a choice of weapon and item loadout, because my captors obviously aren’t mean enough to let me go down there unprepared. How nice of them. I choose a light machine gun as my primary weapon, a giant club as a melee option, and a motion detecting scanner that I’m told will be very useful. There are plenty of options, from automatic rifles, shotguns, revolvers, and other more futuristic tech. Happy with our setup, we start moving into the darkness, looting some supply boxes and frantically checking our six as we go. My team consists of three developers from 10 Chambers and myself.

Right from the off, and probably as you would expect, teamwork and coordination is the name of the game here. Try to go at it alone in GTFO and you’re not going to last long. That starts and ends with making sure your team is prepared for each enemy encounter. The custom tools that we’ve selected are crucial to mission success, and they work in tandem together: my motion tracker powers up at the press of a button and represents enemy movement as bumps on the readout; a sentry tower covers awkward angles and chains enemies down automatically, and the awesome glue-gun sticks them in place or helps to make choke-points impassable. Before every opened door we prepare as a unit for the engagement, always attempting to silently dispatch any ‘scouts’ to preserve ammunition and avoid attracting too much attention, but we also always try to have a contingency plan if things go wrong.

The comparisons between GTFO and Left 4 Dead are inevitable, but the combat and traversal is far more tactical and much more demanding. Where Left 4 Dead felt like an arcadey romp through fairly wide-open spaces, in GTFO, you need to know where every single member of your team is, how much ammunition they have, and what tools are at your disposal at all times. If you’ve ever seen Aliens, think of the scene in which the Marines are moving through the inside of the hive – GTFO is all about that similar sense of claustrophobic tension, and the combat is often the same sort of frantic close quarter firefight in which you’re fighting the urge to pick a direction and sprint away in fear.

‘Scouts’ are the default enemy-type during the demo. They hide almost completely still, rendering my motion tracker useless, and on more than one occasion we almost walk straight into one after opening a sealed door. In fact, I nearly tripped over one prostrated in the corner of a room. Taking them out silently is key, because, on their own, they’re no major threat (a good whack of my club takes care of the danger), but in numbers, things quickly get more serious. More than just being tricky to manage as a swarm, they’re typically joined by bigger and more gruesome foes attracted by the noise and commotion of the attack. My futuristic machine gun requires a one-second hold down of the trigger before it starts spraying bulletins, and it’s awesome to fire once it kicks in. All the weapons handle with a balance between feeling satisfying and a weighty. This is a survival game as well as a shoot em’ up, after all, and the need to conserve ammunition as well as quickly stamp out rushing enemies is reflected in the dynamics of the shooting.

Even when we prepare, however, things don’t always go to plan. Ammunition supplies run low, as does our health: both require teamwork to recover, and the climax of our demo has me defending my buddies who are down to just melee attacks. After navigating several areas, working together to unlock a series of sealed doorways, and taken down some seriously intense waves of enemies, we stand our ground at the level’s climax. Rushed by dozens of screeching creatures, we mow them down with the last of our bullets, huddling together in a circle to tick down a ‘body scan.’

And then it’s over, we’ve done it; I’m the first journalist in the history of E3 2018 to complete the GTFO demo.

The developers are impressed with my performance over the 30 or so minute experience; I’m buzzing, keen to play more. But that will have to wait until later this year when GTFO launches on PC. I’m told that more levels are being added to the package for the full release, including longer missions that will take two or three times what I’d just experienced. There’s no hint at any deeper story content, but what I’ve just played through has been more than compelling enough to want to dive straight back into GTFO. This is one co-op experience to keep firmly zeroed in on your motion tracker in 2018.