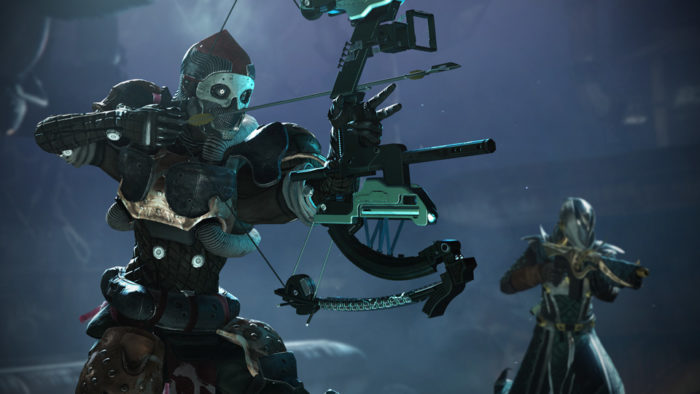 Twinfinite was recently at E3 and we got a heavy helping of Destiny 2 while we were there. The first year has certainly had its ups and downs, but Forsaken from everything we’ve seen so far, seems to be trending in the right direction. We interviewed Destiny 2: Forsaken’s project lead Scott Taylor at E3 and tried to extract as much information about the upcoming expansion as we could. As you would expect from Bungie, they were pretty tight lipped, but you can’t say we didn’t try. Let’s jump right in.

Note: This interview was lightly edited for clarity. 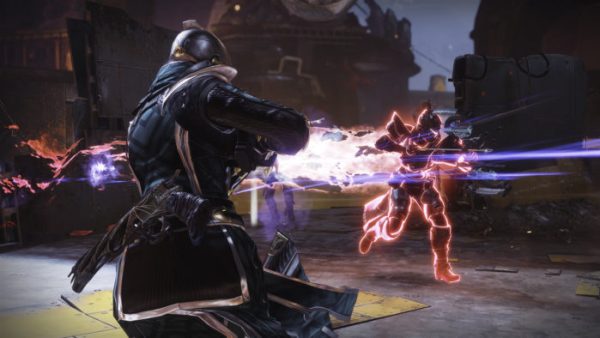 Ed McGlone From Twinfinite: One of the most interesting tidbits from the Forsaken reveal was hearing that the new end game area, The Dreaming City, would change as people play. Can you give us any details on how that will work?

Destiny 2: Forsaken project lead Scott Taylor: I sadly cannot, because we want players to discover it. The thing I can tell you though is that The Dreaming City is where the raid is, but it’s more than that. It’s a whole destinaton where players can go, discover secrets, there are new activities there that will change over time. Why and how that works, we want players to find out.

Twinfinite: Is there anything else you can tell us?

Taylor: Sure, I can tell you that the raid is tied thematically story wise to the campaign so it’s not some whole separate thing, it’s the culmination of the stuff you learn about the adventure that we’re talking about and that it’s very boss heavy. We’ve talked about that too.

Twinfinite: Will you use the Forsaken expansion to do any subclass redesign or balance changes? I imagine the new paths/supers are a way to provide a new play experience, but will you be changing anything about the original paths?

Taylor: We have nine new supers, so if you love your arc warlock, you’re going to get a new way to play. So we’re focusing on figuring out how those [new supers] balance within everything else. And then, the biggest thing we’re doing with sandbox is changing up the weapon system and that means we’re rebalancing the ammo and how that works. The weapon system, if you liked to play the way Destiny 1 worked, that’s awesome, if you liked Destiny 2, that’s awesome too. But you can also do crazier combinations like multiple shotguns.

Twinfinite: Are there any smaller, quality of life changes that you have planned that maybe wasn’t flashy enough to make it to the trailers, but you wouldn’t mind sharing today?

Taylor: It’s not in the trailer but one we’ve talked about is how the shader system is working, we’ll be able to delete multiple shaders at once, shaders are going to be stored in the collection. So that’s something that if you’re a Destiny player that’s going to be really impactful for you but it’s not a flashy thing you put in a trailer.

Twinfinite: During the reveal stream the presenters touched on the reality that a lot of players come in for short bursts, and then drift off. What change, or piece of new content, are you most excited about that you think will be most effective in keeping players around long after the release of Forsaken?

Taylor: I think Gambit, our all new mode. It has a whole new armor set, a new weapon set, and some exotics that are tied to it. In addition, it’s super fun. So we think that’s going to have a lot of staying power. We’re also, going to be unveiling some stuff over time that we think is going to bring people around, and we’re working on how power progression works and we think that’s also going to encourage people to keep playing.

Twinfinite: Could you elaborate on that a little bit?

Twinfinite: If Gambit is successful and popular, will you be open to a more competitive Iron Banner/Trials of the Nine version of that mode?

Taylor: That’s a great idea. Right now we’re focused on launching it because it’s a whole new activity. It’s not a crucible mode, it’s something completely new. So it’s going to have four maps. It’s going to have a single playlist at first and yeah when people start playing it we think we’re going to start learning very quickly what they are looking for from the mode to do something next. But we do want to support it and see how it grows.

Twinfinite: I don’t want to forget about the Crucible. Can you talk to us about how Crucible will be changing when Forsaken launches:

Taylor: Even before Forsaken launches, we’ve already said there are going to be permanent changes like rumble is coming full-time and 6v6 Quick Play, and those are the things we’ve announced. There are a lot of other exciting things coming to the crucible that you’ll hear about soon.

Twinfinite: What about competitive mode? Will that change at all? Game modes for example?

Taylor: That falls under the banner of things we’re going to talk about later. 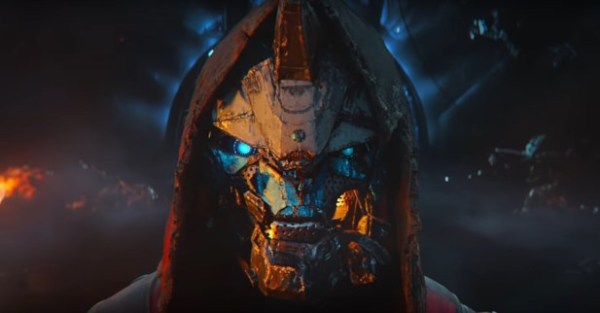 Twinfinite:  How screwed is the Prison of Elders? Is it officially out of business?

Taylor: No, I think we want to repopulate it. They have some security problems in the Reef. Old school players will know that there is a guy named Skolas who escape from the Prison previously, but this is a much bigger riot situation.

Twinfinite: We’re returning to the reef and the Prison of Elders, that means our old pal Variks is returning, yessssssss?

Taylor: Variks has a part to play in the story. It’s probably not what people expect. You will learn about what Variks is up to.

Taylor: Do you want him to be dead?

Twinfinite: No, absolutely not.

Twinfinite: OK next totally unrelated question, can you explain to us how exo-revival works?

Taylor: I am not the right person to explain to you how exo-revival works, but Cayde-6 is still dead.

Twinfinite: Is the Forsaken storyline a self-contained tale? Or will it connect to the events of the base game at all?

Taylor: So at the end of Destiny 2, there’s a cinematic scene that shows traveler waking up and the light touching Mercury, Mars, and now the Reef. There’s a bit of what’s happening that’s triggered by some of that. And, this story taps into the larger Destiny story of Prince Uldren, Petra, Cayde obviously. So we’re working with both some of those ideas that were expressed at the end of Destiny 2, and characters that people have been wondering what’s going on with them for many years now. It’s still accessible to everyone and it’s going to tee off future events as well.

Twinfinite: Can you give us any details on why Uldren is acting like such a jerkface?

Taylor: I can’t, but the story will. So when you play the game, Prince Uldren through cutscenes, new lore that you’ll learn about first of all, where’s he’s been, what he’s been up to and why he’s doing this, and what has caused him to take this different turn that people maybe didn’t expect. 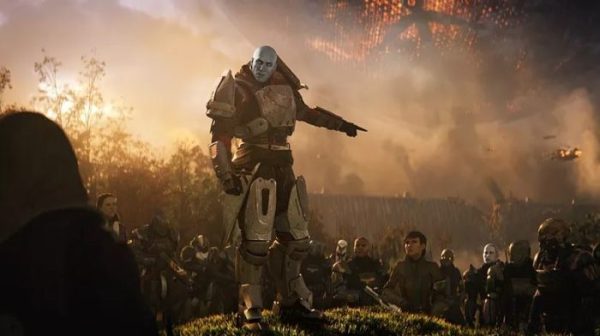 Twinfinite: Could you explain how weapon slot changes will work exactly? What’s going to happen to the current loadout of Kinetic, Energy, and Power. For example: If you can run power weapons in the first two slots now, how will that change the current power weapon slot?

Taylor: So the power slot is going to house the rocket, the sword, and the linear fusion rifles, and the grenade launchers. All the other weapons can be assigned to either the primary or secondary slot. Which means a shotgun could drop and it could show up in your first slot, second slot, or your third slot, but they will be assigned to a slot. You have to figure out based on what’s available to you, where you want to place things.

Twinfinite: So for example, Better Devils that’s going to stay as a kinetic first slot weapon not [drop as] a power or an energy weapon?

Taylor: There will still be kinetic and energy, so yeah Better Devils will likely stay where it is. It’s possible I’m wrong about that, but my assumption is that based on the fact that it doesn’t have an energy, would be that it stays there.

Taylor: If a Better Devils dropped that was set in that slot, you can’t just place anything wherever.

Twinfinite: Another point of confusion within the community that I’m noticing is how weapon randomization will apply to year one weapons. Can you provide some clarification on how that will work?

Taylor: Yeah so random rolls, is a feature we are introducing for any weapons that are added once Forsaken [releases] and beyond. That means that the new Forsaken weapons will have it, the new seasonal weapons for all players will have the random rolls system as well. But we’re not going back and touching the [year one] weapons, Better Devils for example will continue to be Better Devils. However, you can infuse better devils to the max power.

Twinfinite: So for example, if a Better Devils drops after Forsaken launches, it’s still going to have the same stats people are used to?

Twinfinite: Can you tell us what you have planned exactly for mod and masterwork changes?

Taylor: We’re going to be detailing that over the summer but we are working on the mod system in detail yeah.

Taylor: I would say that it’s quite different.

Twinfinite:  Do you have plans yet for what will happen to year one content such as the Leviathan and Escalation Protocol? Will they be brought up to a year two difficulty?

Taylor: We don’t have any announcements about that, but the gear and the loot can be infused to the new max power.

Twinfinite: Is there anything about year one, such as how raid content is released, Trials of the Nine, Milestones, anything that will be seeing any dramatic changes that players should be aware of?

Taylor: Can you give an example?

Twinfinite: Let’s take the Leviathan raid for example and the way that was pieced out into one main raid, and two raid lairs.

Taylor: So, the raid that we have in Forsaken takes place on The Dreaming City and is thematically tied to the story. And then, we’ve announced that we are going to be doing more raid lairs, but we’re not saying where they are. So as far as if we’re going do them as part of where this raid is or not, we’re saying yet.

Twinfinite: What about other stuff. Are milestones going to work the same way? What about Trials of the Nine?

Taylor: There’s so much going on! For Trials of the Nine, all the PvP, Crucible stuff, we’re going to talk about later in the summer. We are working on the director and the milestone system. The director is going to get an update with new destinations, and we’re looking at how we put pursuits in front of players. We’ll be going into detail on that soon.

Twinfinite: Exotic armor changes are coming up! Are there any armor redesigns that are being impacted more by the new supers and subclass paths rather than what is in the game now?

Taylor: Oh that’s interesting. I don’t have a great answer for that, actually.