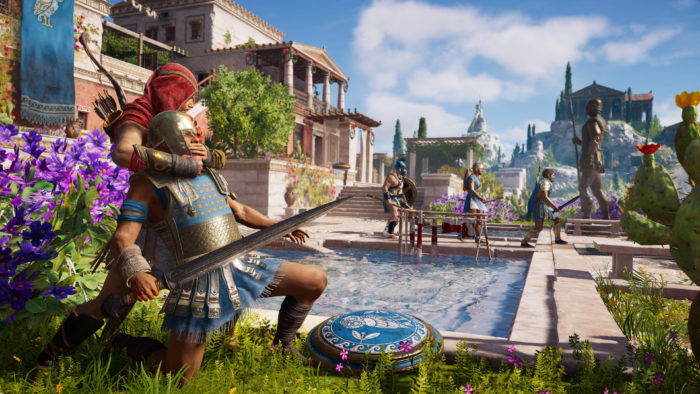 There’s no doubt that Assassin’s Creed’s total overhaul last year with Origins was a welcome change of pace. The Souls-like combat and all-new RPG mechanics made it almost feel like a complete reboot, and the most ancient historical setting we’ve ever seen was also its most spectacular. Importantly for Ubisoft, Origins released to critical acclaim and thrust Assassin’s Creed right back into the spotlight as one of the premier open-world experiences. Perhaps it’s unsurprising, then, the developer is keen to follow up on that as quickly as possible. But this quickly? I for one was caught off guard by just how rapidly they’re churning out a brand new entry called Odyssey.

Naturally, it would be easy to assume that its development is just a reactionary measure to the success of Origins, but that couldn’t be further from the truth. Odyssey has in fact been in development for over three years, starting only just after Assassin’s Creed Origins. Developed essentially in tandem, the two share more than a little DNA as a result. In fact, in my hour play session of Assassin’s Creed Odyssey at E3 2018, I was struggling to differentiate much between the two at all. The graphical assets, UI, combat, and inventory system are all identical. It’s not a bad thing, per se – there was so much to like about Origins that it’s little wonder that Ubisoft was keen to use it as a foundation – but not everyone is going to appreciate what sometimes feels like just a Spartan Greek reskin of Bayek’s adventure.

Admittedly, the familiarity does make Odyssey feel a little less special —as if you’re playing a DLC expansion rather than a full-blown sequel. But I can tell you that it’s absolutely the full-fat RPG that I’d always wished Origins was. Indeed, I probably played over 50 hours of Origins, and though much of that time was spent reveling in the improvements of its new design, there was plenty of frustration to be had with some of its half-baked mechanics. In my time with Odyssey, it quickly became apparent that Origins was really only the gateway to what will be much more nuanced and involved progression mechanics in AC moving forward.

Dialogue options, romantic relationships, and improvements to the way in which the RPG mechanics have been balanced in the game have moved the game on from Origins. I was told by a developer at Ubisoft’s conference room that the pesky level gating wouldn’t be so intrusive this time around —attacking enemies several levels above you is actually feasible this time around, thank goodness.

There are other new features beyond just a greater emphasis on progression systems, too. In typical Ubisoft style, mechanics have been lifted from its other hugely successful franchise, Far Cry. Odyssey has you weaken the grasp of hostile forces on each island before you take on its leader in a boss battle, just as Far Cry 5 had you take out cult leaders after weakening its different counties. It was a neat mechanic so it’s a welcome sight, but these sorts of shared assets do have a tendency to take away a bit of the magic when they’re so transparently shared between games.

During my hour play session with Odyssey, I did get to try the new conquest battles. They charge you with helping fellow Spartans defeat hostile forces of 150 soldiers, and there are bosses peppered in to up the difficulty as you carve your way through their ranks. I had fun with these, mostly because it gave me a good chance to try out the all-new special abilities. Holding the bumper brings up four different special moves that can be activated with a different face button, which includes the bad-ass Spartan kick, as well as a very useful shield grab. Alexios and Cassandra have access to different abilities, with Cassandra’s seemingly centered more around stealth and agility rather than Alexios’ brute force. I did wonder how interesting these battles would be after three or four more encounters, though. We’ll have to wait and see how diverse the encounters are beyond what I was able to sample during the demo.

Overall I walked away pleased that Assassin’s Creed Odyssey was leaning more heavily into the RPG mechanics that absolutely moved the series into a positive new direction a year earlier. The trouble is that it did end up feeling like a tweaked version of a game I’d already spent dozens of hours with already, and so now I can’t help but worry Odyssey will just feel like going through the motions for me —a reskinned version of the same thing I’d already played with only subtle improvements to the core experience. Hopefully, the narrative and characters are compelling enough to keep me invested, and the RPG mechanics detailed enough to keep the gameplay loop entertaining.