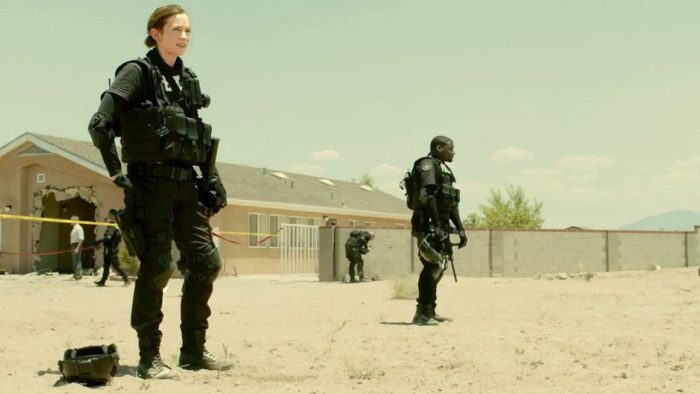 It’s time to take a look at movies like Sicario, but we’ve got plenty other similar “movies like” lists, so don’t be afraid to use that search bar. Some examples: Spirited Away, Silent Hill, John Wick, Ready Player One.

The first in our movies like Sicario, Hurt Locker (2008) follows a small group of American soldiers who are tasked with the disposal of explosive devices during the Iraq war.

In stark contrast to the usual character-laden war epic, Hurt Locker places more focus on the individual soldiers and deeply explores the psychological stress that goes with their day-to-day war activities. It features mesmerizing cinematography, giving it an artistic flair that many war movies share.

Thanks to screenwriter Mark Boal, who spent time with bomb crews as an embedded journalist in Iraq during the war, the film also boasts a realistic edge that many similar movies can match.

It boasts the same tense atmosphere that constantly keeps you on the edge of your sear, and focuses on a small group of people.

Traffic (2000), a film adaptation of the 1989 British series Traffik, follows three interconnected stories surrounding the illegal drug trade in the US and Mexico.

Traffic is considerably more politically charged than other films dealing with similar themes, exploring the drug trade’s line of addiction, corruption, and crime from the everyday person right through to the political elite.

Featuring a plethora of strong performances from the likes of Benicio del Toro, Michael Douglas, Catherine Zeta-Jones, and Dennis Quaid, Traffic’s cast will keep you captivated and immersed as you make your way through the movie’s string of twists and turns.

Traffic has a very distinctive edge due to director Steven Soderbergh’s unique filmmaking techniques. For instance, Soderbergh used different color grades for each of the various stories so that they are easily told apart, intentionally imbuing the film with a chaotic and disorganized atmosphere, much like the political themes it deals with.

So why does this count as one of our movies like Sicario? Benecio del Toro brings an entrancing and tense performance, and the film also features a healthy dose of unforeseen twists.

Another of our movies like Sicario, Nocturnal Animals (2016) tells the story of an idiosyncratic gallery owner (Amy Adams) who is reading the novel of her ex-husband (Jake Gyllenhaal).

Most of the film’s drive and drama takes place during the novel’s story, a dark, daring, and absorbing narrative that, thanks to its brilliant cast and direction, will make you instantly forget about the world beyond your screen.

The novel tells the story of an everyday family taking a road trip through West Texas and eventually encounters a local group of drunken troublemakers.

For the sake of not spoiling anything, we won’t go too deep into details, but what we can tell you is that what follows is a relentless roller-coaster of nail-biting moments that won’t offer you any relief for even a single moment.

Nocturnal Animals features some truly disturbing and shocking scenes, so it should be noted that this film is certainly not for the faint of heart.

Bridge of Spies (2015), an epic historical war drama directed and produced by renowned filmmaker Steven Spielberg, takes place amidst the Cold War and follows lawyer James B. Donovan (Tom Hanks) who is tasked by the US government with negotiating the secret exchange of a US and Soviet spy between the two countries, the latter being a former client of Donavan.

Based on a true story, the movie’s title refers to the Glienicke Bridge, located between East Germany and West Berlin, where the exchange originally took place in 1962.

The film takes us through the highest levels of politics where the balance between sympathy of human life and political agenda often clash in a world filled with secrecy and espionage.

Although Bridge of Spies does slightly deviate from the real-world events, critics have praised its attempt to stay as historically accurate as possible while creating a captivating story. The film was nominated for six Academy Awards, and Mark Rylance, who plays the Soviet spy, won Best Supporting Actor.

It is a human-driven story set in a world where human life is often collateral damage in the face of a greater cause. It also boasts riveting performances by veteran actors, making it a no-brainer for fans of movies like Sicario.

A Perfect Day (2015) takes place in former Yugoslavia near the end of the Yugoslav Wars in the 90’s and follows a group of veteran aid workers who are attempting to retrieve a corpse from a village well, a method often used in the war to poison water supplies.

But a series of unforeseen events prevent the crew from quickly finishing the job, forcing them to venture around the politically unstable and war-torn country to seek a solution, which often leads to life-threating situations.

While the film does occasionally boast a lighthearted tone, especially due to actor Tim Robbins’ comedic edge, like Sicario, it gradually builds tension and soon descends into a string of unnerving encounters.

While the film might be as renowned as the other entries on this list, its intriguing story and strong cast make for a brilliantly engrossing experience.

It’s another film boasting a strong performance by veteran actor Benicio del Toro, and focuses on a small group of seemingly insignificant individuals that get caught up in big problems.

That does it for our list of movies like Sicario! Any we missed? Let us know down below.