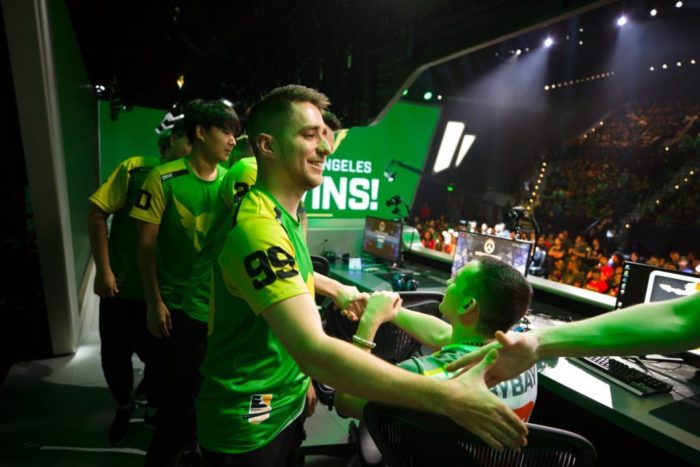 Stage 3 of the Overwatch League will be starting up on Wednesday night, but as was the case with the beginning of Stage 2, many of the teams are undergoing some shakeups yet again. Here are all of the new player signings and team trades we know about so far.

This already got announced a few weeks back, but Dallas Fuel is bringing in a new player to fill their main tank role. Minseok ‘OGE’ Son was signed as a new player, but before he could even make his debut in the Overwatch League, he was handed a suspension for four matches. OGE was taking part in account-boosting, which is against the terms of service of the game and is a violation of the Overwatch League code of conduct as well. While it’s nice to see that Fuel is trying to get their main tank drama under control, it’s definitely going to hurt them if OGE can’t play till midway through Stage 3.

That said, even if they get OGE into their lineup, the Fuel still has a lot of other issues to work through. There are reports that Seagull is looking to be traded off from the team, and even their star DPS player Effect might be getting traded away as well.

The other Texas team in the Overwatch League is faring much better. The team announced a few days ago that they’ve signed Won-hyeop ‘ArHaN’ Jeong to their roster. ArHaN is known for his DPS and Genji play, so it should be fun to see how he pairs up with Linkzr. That said, the Outlaws did also mention that it’ll take a while for his visa process to go through, so we might not see him in Stage 3 at all.

In the meantime, it looks like the Gladiators are looking to shore up their weaknesses even more going into Stage 3 of the Overwatch League. As we all know, the Los Angeles Valiant is another team that is currently in flux, and it was revealed recently that their DPS player Silkthread might not be playing for the team any longer. With that in mind, rumors are currently circulating around Silkthread being traded to the Gladiators, along with Dae-min ‘Daemin’ Kim who might also be getting signed to the team as a new player. Daemin used to play for Kongdoo Uncia, and is now a part of NRG Esports.

In addition to that, the Gladiators aren’t the only ones who are interested in these two players. Reports also suggest that other teams, including the Shanghai Dragons, might be interested in picking up Silkthread. He certainly would be a great DPS addition to the faltering Dragons.

Please join us in welcoming our newest addition to #VALLA: Jun-hyeok “Bunny” Chae – transferred from @SeoulDynasty 💛💚

Amidst all of these rumors and speculative reports, here’s one trade that has been officially confirmed. Bunny from the Seoul Dynasty has been sent off to the Los Angeles Valiant. This is definitely a weird one, considering that Valiant already has SoOn as their star Tracer player, and we’re not entirely sure if Bunny is really a big upgrade over what the team has now. Then again, it’s possible that Valiant simply wanted a Korean Tracer player to gel with their other Korean players like Envy, Fate, and Kariv.

With that in mind, where does that leave players like SoOn and uNKOE?

Based on currently rumors, the trade of Bunny to Valiant makes sense if Soon is leaving as part of a three-way trade.

I don’t have any other explanation for Bunny’s trade other than Soon changing teams.

One of the biggest rumors that’s floating around right now involves a three-way trade between the Dallas Fuel, Los Angeles Valiant, and Seoul Dynasty. Overwatch League caster MonteCristo fanned the flames of speculation even further with a recent tweet shedding light on the transfer plans between these three teams.

With the transfer of Bunny to Valiant, the LA team is allegedly set to give away SoOn and uNKOE to the Dallas Fuel for a lovely little Rogue reunion with aKm. And since SoOn would presumably take on the Tracer role on Fuel, Effect would be transferred to the Seoul Dynasty and be paired up with Fleta to create a scary DPS duo. These trades sound good for the most part, though we suspect the Fuel will continue to suffer from a lack of teamwork and cohesion. Sure, the former Rogue members might work well together, but until they get their tank play sorted out, we don’t expect them to start getting convincing victories anytime soon.

Stage 3 of the Overwatch League is set to kick off on Wednesday night, April 4. We’ll keep you updated on all of the action throughout the week.