I don’t know if they have surgeons working on the team of SCUM or what, but it’s by far the most over the top, ambitious survival simulation game I have ever seen. Not only for by indie games standard, but just… ever.

SCUM has a prison riot-turned-game show background where prisoners are forced to scavenge, kill, cooperate, and just generally do whatever it takes to survive. Your objective, is to try and escape this hell in one piece either by taking out anyone that crosses your path, or by working together. That’s up to you.

The rub here though is that there is a ridiculously detailed in-game multi parameter life monitor that tracks way more than you ever thought you would need. Heart rate, body fat, thirst, hunger etc.

Factors such as your age and physical or lack thereof will determine your initial strengths and weaknesses, but from that point on, everything you do like running, shooting, or even eating will factor into your character’s development and vitals. If you like surivival games, and are looking for one with an unprecedented amount of details, SCUM absolutely needs to be on your radar this year, and it has a pretty damn great chance of making it big.

SCUM will be out at some point this year for PC.

RPG/JRPG style games tend to stay in their comfort zone. There’s some kind of reluctant hero, who sets off on an adventure in some made-up fantasy fueled world. They pick up a few friends along the way and kill the bad guy and save the world. Well you know what, it’s a tried and true formula that has stood the test of time. Why mess with it?

YIIK: A Postmodern RPG, doesn’t necessarily throw that all out. You’re going to battle bad guys and pick up friends and stuff like that, but it takes place in a version of our world, not too long ago — instead, it takes place roughly just 18 years ago, at the turn of the century. Instead of potions, you’ll be pounding down BLTs down for some extra health and flinging vinyl records at your problems. It’s a very interesting point in time to set a irrelevant RPG in.  There’s lots of self-aware, millennial humor in the story that we can see, and even though it takes place in our world at the turn of the century, there is plenty of supernatural stuff that you’ll come across as the story unravels.

What was especially neat about YIIK: A Postmodern RPG, is its approach to combat. Instead of just mindless attacking, abilities and even normal attacks can all be powered up through a variety of different mini-games that spice up the usual: select attack in menu, watch attack happen, and then see enemy attack, rinse and repeat.

There’s nothing wrong with RPGs, that isn’t what this is about, and there are plenty of great RPG indie games of course. However, if you want something really different in both setting and gameplay, that is also fun and has gameplay that is fun but still familiar, YIIK: A Postmodern RPG can be your thing.

It should be out by the end of the month at some point on the Nintendo Switch, PS4, PS Vita, and PC.

We all liked Guacamelee right? Or at least most of you did? OK well cool, so no objections to more Guacamelee right? Awesome. The first game, was a bizarre lucha-lore driven metroidvania with a satisfying combo system, visually pleasing aesthetics, and a light-hearted and fun story.  Guacamelee 2 based on what we played at PAX East and EGX Rezzed, is shaping up to be all of that again, but more.

The developers noted to us that they didn’t want to mess with what was fun about playing as Juan in the first game, so instead of changing that around for the sake of changing things around, they infused all their new ideas into Juan’s chicken form, which is greatly expanded in Guacamelee 2. You’ll be able to play most of the game just as the chicken if you wanted to, as it has a completely different fighting style that can now stand on its own. You’ll be unraveling a chicken illuminati plot, which explains why chickens are way more pronounced in Guacamelee 2.

At the end of the day, more Guacamelee is good thing. And if whether you played the first or didn’t (but especially if you liked the first one) you should be keeping the sequel on your radar because it’s looking like it’s going to be great too.

It will be out sometime this year on PS4. 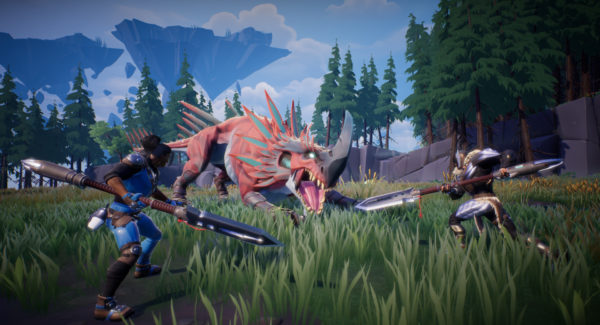 Dauntless, although they won’t admit it, is basically trying to do Monster Hunter better than Monster Hunter does Monster Hunter. And honestly, they have a good chance of doing that. We’ve tried Dauntless a few times now in the last year, and every time we walk away impressed with what we’ve played.

Dauntless is visually pleasing to the eyes, featuring a vibrant art style that looks both cartoonish, and kind of realistic too at the same time. Its combat, is very satisfying. Attacks feel like they are connecting, and when you land a big shot, you feel it and the behemoth feels it too. But that runs both ways. Combat is very deliberate and even Souls-like, and you’ll need to choose carefully when to go for a big combo otherwise the behemoths will punish you hard. Fights will be varied, and each behemoth will have their own quirks and strategies to take them down.

If you like the Monster Hunter series, and are looking for more, I really have a hard time thinking you won’t find something you like about Dauntless. Even in an un-finished state, it feels incredibly polished and there is still more to come. It’s only going to be out on PC for now, but a console version definitely on the table according to Dauntless team in the future once the PC version is off and running.

The PC Open Beta for Dauntless starts on May 24.

I’m on the record of saying I just want everything and anything on the Switch because it’s just so wonderful to not be tethered to a TV/PC to play a home console quality game. I would love some more multiplayer competitive games though and if you’re like me, then Aftercharge might be right up your alley. It’s not exclusive to the Switch, it’s coming to the Xbox One and PC as well, but it’s a wonderful fit for the portable home console.

Aftercharge pits a group of invisible robots against a group of invincible hunters. The robots will need to sneak around and complete objectives while the hunters must use traps to locate, and stop the robots before they can do so. We played it at PAX East, and it’s very simple to pick up and play, but there’s also a lot of room for strategy and nuance in approach if you take it seriously. Similar to Splatoon 2.

If you’re looking for a competitive game that’s easy to play, and has quick matches that lets you get a bunch in, in a short burst, then Aftercharge is definitely worth keeping an eye on when it releases later this year on Switch, Xbox One and PC.

Features editor Alex Gibson: With PlayerUnknown’s Battlegrounds and Fortnite Battle Royale taking the multiplayer shoot scene by storm over the past twelve months, it doesn’t take a genius to work out that we’re soon to see an influx of new games putting their own spin on the popular formula. In fact, we’re already seeing games such as Radical Heights quickly move to capitalize on the trend.

Mavericks: Proving Grounds, however, is an upcoming indie title that has ambitions far beyond merely iterating on the blueprint laid down by the trends setters. Developed by UK team Automaton Games, Mavericks is an MMO of breathtaking scale, featuring a 150 square kilometer map and server support for up to 1000 players.

More than just a conventional battle royale game, this MMO features a social space with its own economy and an open-world map to traverse and do battle with other players. From the game’s HUB, you’ll be able to select different areas of its enormous map to engage in play-session of battle royale, typically with around 400 players. But in our recent interview with the game’s CEO, James Thompson, there are plans for longer 1000 player sessions too!

Mavericks sets itself apart with more than just big numbers, though. The emphasis of gameplay is firmly on the tactical, with the environment reacting to player movement in a way that provides much more information to players in an organic way. Grass will bend and leave trails to follow, trees and rocks will show evidence of firefights, and dead bodies will lay sprawled on the ground to help players track each other.

Mavericks promises to deliver a hugely layered and strategic gameplay experience, and we’ll certainly be keeping our eye on it. 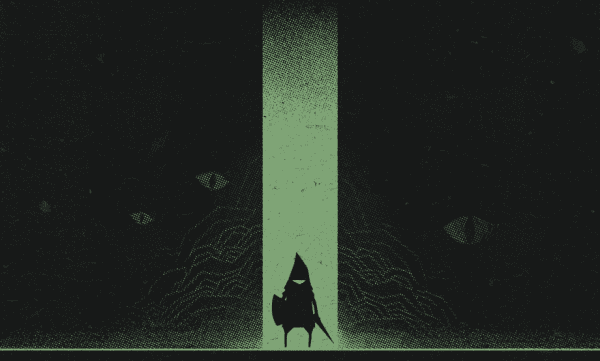 Features editor Alex Gibson: Combine the atmosphere of a game like INSIDE, the combat of a Souls game, and layer on top a whole stack of different survival mechanics and you’re approaching the sort of recipe that has given birth to Below. Capybara Games’ hotly anticipated title was first announced some time ago, but then went dark as the developer honed the product under a weight of pretty serious expectation. It’s recently resurfaced, and playing it at EGX Rezzed this year, we can confirm it’s still well on track to deliver a truly memorable gaming experience.

Below is a third-person Rougelite, but it really does feel unlike anything we’ve played before. Deeply atmospheric, the sound design and aesthetic can’t be understated; it’s utterly superb, and the environment plays a key role in teeing up the intrigue that keeps driving players forward.

Gameplay revolves around reaching checkpoints — lighting campfires is a further nod to FromSoftware’s Souls games. There’s absolutely no hand-holding of any kind and it’s very much up to the player to make their own way around the world. You’ll have to quickly get a handle on all sorts of mechanics the game throws at you, and if you die, that’s it. Below features permadeath, with each death sending you back to your last campfire. The world around will typically reshape itself, disorienting you as you struggle to find your body and reclaim your progress.

From the little we’ve played, Below is a punishing experience, but one that totally gets under your skin. Here’s one exclusive that gives you a very reason to own an Xbox One in 2018.