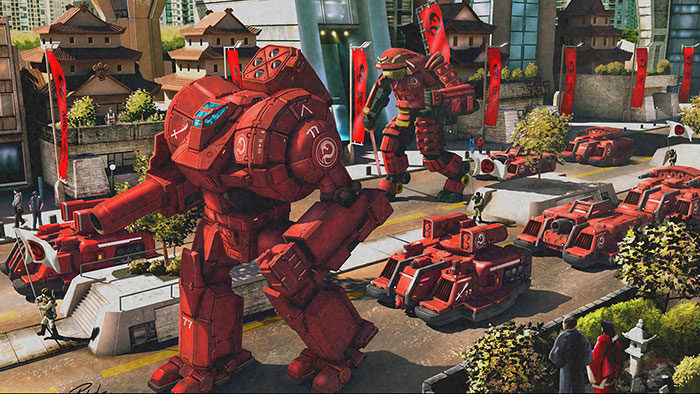 BattleTech is here, and it’s the video game adaptation of the iconic board game franchise we’ve all been waiting for. The PC title takes the best elements of turn-based games like XCOM and applies it to the rich lore of the BattleTech universe. The result? Highly intense, tactical gameplay in which every strategic decision has a meaningful consequence on the battlefield. Not to mention, some of the coolest damn mech designs we’ve seen in years, which ultimately make for some kick-ass wallpapers for your desktop background.

We’ve compiled ten of the coolest BattleTech wallpapers, from the stylized art of the original source material to HD images specific to the new game, that anyone invested in the lore of the game will appreciate. Without further ado, here are our top picks:

We love this awesome image of the mechs and battle tanks on parade. Download

A very atmospheric shot as combatants move across a smoke-covered battlefield. Download

A tribute to the original board-game, this wallpaper has a delightful hand-drawn aesthetic. Download

There aren’t many cooler places to smoke a cigarette than on top of your mech. Download

This BattleTech concept art makes for an awesome wallpaper. Download

Another from the original source material that we couldn’t resist. Download