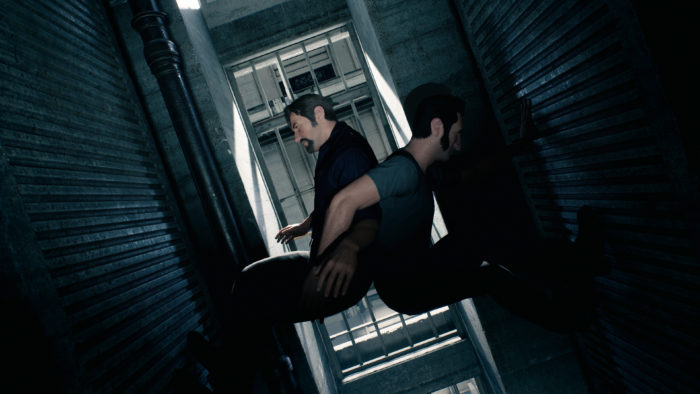 Back in the era of PlayStation 2, Nintendo 64, and the original Xbox, playing games with family and friends in the same room was rich with options. Games like Mario Party, Fusion Frenzy, and Time Crisis, were best enjoyed on the couch surrounded by friends, but as years went on, the genre of couch co-op began to fade, as Xbox Live, and PlayStation Network allowed players to play together in the comfort of their own homes. Josef Farres, director of Hazelight Studio’s new game A Way Out, is part of a movement bringing couch co-op back and not just as a token feature. It’s the main focus A Way Out.

A Way Out, is more than just your average prison heist adventure. This game is co-op only, meaning that the campaign from start to finish, must be played with another human. Of course there is online matchmaking for those looking for convenience, but Josef stressed at his presentation at the EA 2017 Press Conference, that this game is meant to be enjoyed on the couch with a friend. The entire design philosophy behind this game is making it an experience for you and a friend to have together.

Also read: A Way Out Review

This game takes two unlikely allies Leo and Vincent, both prisoners for crimes they did not commit, looking to escape for their own personal reasons. As each player controls one of the two protagonists, they must work together, but also make decisions based on their character’s goals. Players aren’t simply along for the ride, they are working together and fighting for each of their characters to get what they want. Leo is a soft-hearted family man, while Vincent is more ruthless, creating for a dynamic that will create tension at times, and give players a sense of depth for these characters.

A Way Out’s split-screen structure allows for truly unique gameplay and storytelling. Even online players will be in split-screen at all times, constantly seeing what their partner is up to. One player may be trying to accomplish a goal, while the other is locked in a cut scene. At some moments, the screen will follow characters that are not Vincent or Leo, and depending on the situation, the sizes of player’s screens may change to emphasize the importance of a scene. Leo and Vincent’s roles are interchangeable throughout each playthrough, allowing for players to try new strategies on subsequent playthroughs.

The gameplay is varied, and focuses on working in tandem with your partner. Watching out for guards, while one of you chisels a hole in your jail cell, staging a gas station stick-up, or even working together to white water raft, all have players communicating, and working together. These sections help further immerse players in Leo and Vincent, which will push them to continue to work for their goals.

A Way Out offers what they are calling a Friend Pass, which allows someone that owns the game, to let another player join them if they don’t own it themself. This is huge for a game that requires two people to play through it, and further pushes the emphasis on cooperation.

A Way Out works hard to bring back the joys of enjoying games with friends and family through cooperation, and with its strong gameplay mechanics, compelling narrative and characters, and its friend pass, all make it a contender for the best co-op game of the year.

For our full thoughts on A Way Out, check out our full scored review right here.