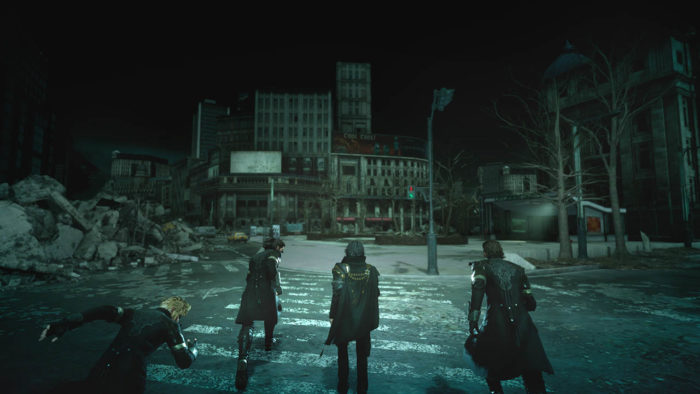 Technically, Final Fantasy XV’s story is already complete. There’s a coherent narrative to follow and a proper ending that gives closure to most of the game’s sub-plots. The only problem was that there were far too many plot holes or unexplained character actions and motivations that detracted from the main story. Important plot developments were left off-screen or brushed aside as audio recordings, and the pacing went horribly off in the final chapters.

With the release of Royal Edition and the Royal Pack, Square Enix is hoping to present a more complete and coherent version of the story. That said, however, it’s still worth noting that game director Hajime Tabata has stated that they do still plan on releasing more story content for the game, which is why he’s hesitant to call this a “Complete Edition.” Over the past year, Final Fantasy XV has seen the release of three new story episodes, which ended up proving to be completely essential in explaining what happened with Gladiolus, Prompto, and Ignis in the main story. There have been some changes made to the infamous Chapter 13 to make less infuriating as well, but overall Final Fantasy XV’s story still doesn’t feel as complete or proper as it could be.

If you’re looking for a complete or definitive version of the XV narrative experience, the Royal Edition is probably going to disappoint you. Instead of adding more story content (though there is some new stuff here), Royal Edition is more focused on adding gameplay bits. The Insomnia City Ruins area before the Citadel has been expanded heavily, and there are a handful of new bosses that have been added into the game’s final area as well. The expanded area is a nice touch, especially as the base game felt a little too rushed with the way you could just run down a few linear paths before getting to Ifrit. There are a few cool enemies and Easter eggs tucked away here, and just the ability to explore more of Insomnia itself should please Kingsglaive fans.

What isn’t great, though, is how the new bosses only served to highlight how flawed the game’s combat system is. While it does look cool and flashy on the surface, Final Fantasy XV’s combat system was a headache because of how poorly telegraphed enemy attacks were, and how the dodging always felt so flimsy and unreliable. With the addition of the Kings of Yore bosses, the flaws are on full display. The new bosses, while cool, are just straight up damage sponges with really devastating attacks that are difficult to dodge. Even with level 70+ characters and the freaking Ultima Weapon equipped on Noctis, these fights felt more like a battle of attrition than anything else, where I’d spam Elixirs each time I got low while waiting for an opening.

There are a few additional scenes added with the Royal Edition, though their purpose is more to flesh out the camaraderie between the characters, which is a nice touch especially if you’ve played the previous DLC episodes. Luna and Gentiana also make small appearances in a new scene, though ultimately it’s not really anything substantial.

The sweet-looking Royal Vessel boat has also been included as a new mode of transportation around Eos, which is a lovely addition for players who enjoyed the fishing mini game or just wanted to explore more of the open world. There’s also a first-person view mode, which feels like a really weird tack-on just because of how unnatural the game feels when you’re in it. There’s barely any camera movement in first-person view, so it’s not even that immersive because you hardly feel like you’re in the shoes of Noctis himself. The combat system becomes nearly unplayable in first-person view, unless you’re looking for a new way to challenge yourself in the game, so it’s hard to see why anyone would want to utilize this feature.