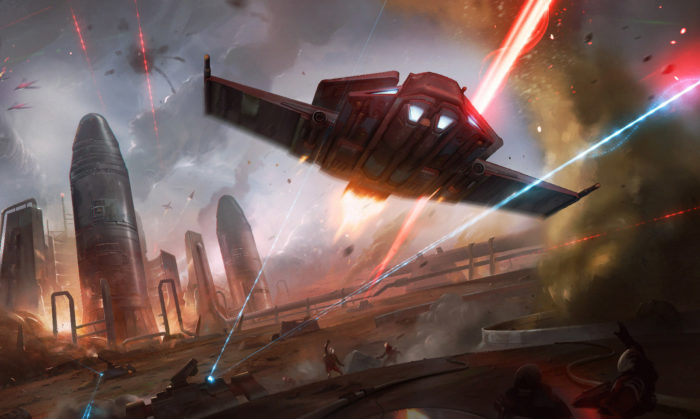 At first glance, it seems like Sky Force Reloaded has a lot going against it. Though it’s a vertical scrolling shoot ‘em up, arguably one of the most easily identifiable video game genres in the world, Sky Force Reloaded is a converted mobile game that released back in 2006 (one that preyed on player’s wallets with in-game purchases no less). Yet, I’ve sunk 16 hours into this game’s grind already, and I’m not planning on stopping anytime soon.

Like other games in the genre, Sky Force Reloaded has players fly through predetermined levels inhabited by enemies that attack from the sea, land, and sky. Initially, the player’s ship is incredibly weak. It explodes in a few hits and has to blast every foe, even the weaker ones, a few times to destroy them. It’s unlikely anyone will make it through the first stage on their first or even second try. Perhaps not even their third. But every enemy destroyed yields stars, the game’s currency. After missions, regardless of whether it was a success or failure, these stars can be used to upgrade the ship. Early on, the player will only be able to afford upgrades to their primary weapon and armor, but eventually more powerful weapons, like missiles and bombs, will become available.

With these upgrades the player can go further through each level, and eventually come face to face with the level’s boss. Beating the boss unlocks the next level, of which there are 15. Optional objectives for each level, ranging from killing every enemy in the stage to saving a certain amount of marooned allies, can be completed for additional rewards. Completing all the optional objectives for a stage unlocks the stage’s hard mode, where enemies are twice as tough but drop twice as many stars.

Completing all the objectives for a stage on hard mode unlocks the stage’s insanity mode, promoting enemy numbers and power once again and increasing the star drop rate to three times as many. This system really helps with the last four stages, which are incredibly difficult even on normal difficulty. Going back to play the earliest stages on harder difficulties provides a more accessible challenge and enough stars to unlock the ship’s better upgrades. It’s then much easier to beat the final third of the game.

Outside of the game’s final levels on the hard and insanity difficulties, the game’s ever-present grind never feels overbearing. Going back to replay old missions usually isn’t all that difficult, as the steady acclimation of upgrades makes the player’s ship a powerhouse in comparison to how it started. Those early troublesome foes become gnats that are easily swatted aside. Grabbing all those extra stars will give the player just enough of a competitive edge for the end of the game.

Growth is slow at the beginning, but it’s not long before the player starts seeing regular rewards for their efforts. The decision to drop the mobile version’s in-game currency was a smart choice. That initial hump the player faces on the first two stages is just frustrating enough that it might have led plenty of gamers to buy a few hundred stars and quickly outfit their ship. As is, pushing through that opening hardship provides just enough inspiration to continue working towards the game’s goal. And by that point, the gameplay itself has become compelling enough that the player really doesn’t want to stop.

There is a story in Sky Force Reloaded, but it’s pretty barebones. The player takes on the role of heroic pilots sent out on missions against a grumpy woman who’s so stereotypically evil, she’s practically a caricature. And that’s pretty much it. A commander provides brief moments of narration at the beginning and end of every mission to give some purpose as to why the player is flying where they are flying, but it’s awfully tempting to just start skipping her briefings and debriefs halfway through the game. There’s absolutely no substance to the narrative.

The game doesn’t need a detailed story, though. The gameplay is fun, easy to learn, and difficult to master. It has the groundwork for a great shoot ‘em up even without a story. In fact, the story is so dull, I almost wish the developers had just chosen to ditch the premise entirely. I don’t need to be told that I should stop the bad lady when she finishes her monologue on world domination with a sinister chuckle. That’s kind of implied.

Visually, the game is alright to look at. More importantly, the developers did a good job with the color palette of the ship, the background, enemies, and gunfire, so that it’s always easy for the player to keep track of where they are on the screen. The art style is a bit cartoony, but it matches the campy tone of the game’s plot. The music matches the same chiptune styles of the earliest shoot ‘em ups.

Voiceovers inform the player when they’ve successfully rescued an ally, started a combo, or are close to death. This helps the player keep their eyes glued to their ship. There are no status bars that need to be tracked, and it really frees up space on the screen. That being said, it’s almost impossible to play this game with the sound off. You certainly can, but you’ll miss out on crucial information.

I actually despise most shoot ‘em ups, so I’m pleasantly surprised that I enjoyed Sky Force Reloaded as much as I did. Choosing how to upgrade the ship between missions adds an almost RPG-like element to the genre, and invites comparisons to games like 2017’s Everspace. The formula isn’t perfect. The difficulty curve experienced at both the beginning and end of the game are a tad too high, and grabbing all the achievements for the game is proving to be a very steep undertaking. However, a majority of the game’s 15 levels provide hours of entertainment, and the optional objectives, multiple difficulties, and couch co-op offer plenty of replayability. Sky Force Reloaded is going to stay in my game lineup for quite a while.