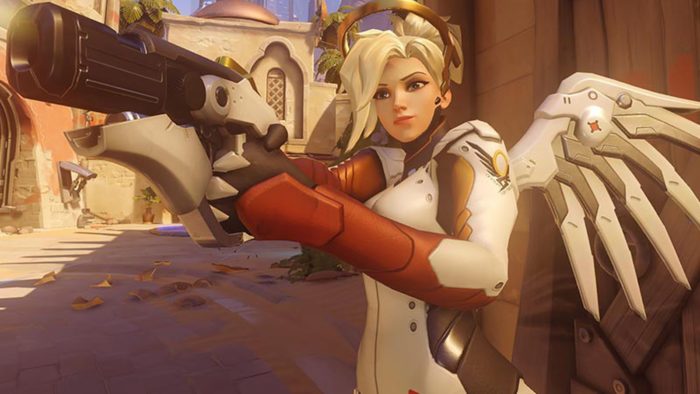 Overwatch has become one of the most popular games in recent memory, thanks to its addictive gameplay, immersive world, and diverse cast of colorful characters. Blizzard’s first-person team shooter has something for everyone, be it if you prefer taking down enemy players aggressively or playing support and healing your team. But there’s been growing pains. The developers have been trying their very best to balance each of the twenty-six playable heroes in the game since launch. Some, apparently, have proven easier to tweak than others. And, indeed, it seems like they are having a certain problem when it comes to one hero – Mercy.

The main issue with the hero over the recent months stems from the “game breaking” Resurrect ability. This skill originally had the ability to bring back a group of dead players without any effort at all, save for the fact that you had to stay alive to cast it. Fast forward to plenty of patches and nerfs later and Mercy’s Resurrect has become her second ability that can only bring back one hero at a time. Despite the changes, many players still consider Resurrect to be an annoyingly powerful ability.

Fans complained about Mercy’s play style during the Overwatch World Cup last year, claiming that her Resurrect could easily wipe “clutch kills” with the press of a button. Some argued that she basically prolonged matches because of the Resurrects she could constantly pull off. They even claimed that pro players were “forced” into using Mercy instead of other Support heroes because of how powerful and unique the ability is. The whole Mercy fiasco has become quite the controversy in the Overwatch fanbase as Blizzard can’t seem to appeal to both those who love and hate Mercy, creating a stigma around the character.

The Support hero’s pick rate has been at an all-time high since the Valkyrie update, and the solution Blizzard seems to be pursuing is to nerf Resurrect into the ground. In a sense, it should work to lower her “must pick” status considering that players who can’t seem to adapt to the Mercy changes are leaning towards other healers, like Moira or Lucio. Those devoted to the hero, however, have to deal with constantly re-learning the character after each nerf.

Learning a hero isn’t easy, especially when it comes to reworks. It took some time before players actually remembered to use Symmetra’s Photon Barrier back during December 2016, and it certainly caught plenty of players off guard when Resurrect was bound as a second skill with the longest ability cooldown in the game. Take note that Mercy mains finally had to pay attention to cooldowns as Mercy never exactly had them in the past. It was a rough transition for a lot of players, but when they finally started working around it, Blizzard slapped on a Valkyrie nerf since she was becoming too powerful. It wasn’t too long before they added the 1.75 cast time which greatly altered how Mercy should Resurrect in fights. Now the developers are finally adding that cast time to her Valkyrie mode, pretty much drilling the idea that resurrecting during her ultimate is a big waste of time.

Blizzard has already stated that they don’t want to remove Resurrect from the game despite the constant complains from fans. What it seems like they are trying to do instead is nerfing it until it become a secondary ability for Mercy, rather than her defining feature. While it might not be an ultimate ability anymore, it certainly still feels like one. At some point, there’s going to be nothing left to nerf aside from just removing the ability to resurrect. At that point, Blizzard might want to consider just adding a new skill that encourages that drives Mercy players to pick her for her healing acumen rather than rezzing.

Mercy, at her core, is mainly about her stellar healing output and mobility. While many might associate her with Resurrect, Blizzard seems to be pushing the other way with her chain healing/damage boost, Guardian Angel speed, and even her flight. And it makes sense since Mercy is identified as a healer and not some kind of necromancer. Resurrect only acts as an added boost to her kit and Blizzard doesn’t seem to have any plans of removing the skill from the game. This only leaves them with two options at the moment: find a way to miraculously “balance” the skill or continue nerfing it to the ground. There will always be both negative and positive critical feedback from Overwatch fans depending on their preferred roles in the game, but it’s ultimately up to the developers to decide just how they plan on tweaking her pick rate. Either way, it doesn’t seem like these Mercy changes will be ending anytime soon.