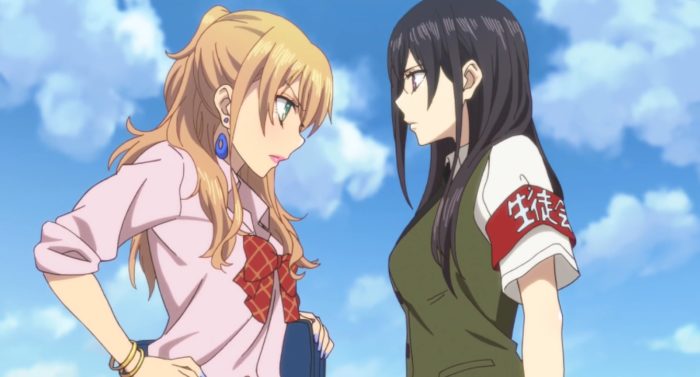 Girl-to-girl romance in anime isn’t anything new, but the whole concept is usually littered with fanservice. The fact that two young, beautiful women decide to skip men altogether and go full lesbian is an attractive topic, especially to the modern demographic. However, one major drawback (especially in mainstream anime) is that the plot is basically discarded for hardcore action and leaves the girls as eye candy instead of actual characters. It’s either that or these romantic feelings are just used as tropes instead of being fully explored. Citrus, on the other hand, seems to try its hand at exploring a yuri anime containing drama, real characters, and an actual narrative.

The main character, Yuzu Aihara, is your run-of-the-mill teenager who places much more focus on her friends and social status over her studies. She has a tight social circle and loves to gossip, especially when it comes to love lives. While she might talk big about her “relationships,” the truth is that she’s actually innocent when it comes to romance. Her life takes a major twist when her mom meets a new man in her life, and she is forced to move and even transfer schools.

Despite the sudden changes in her life, Yuzu chooses to remain hopeful for the most part. Unfortunately for her, things take a drastic turn when she discovers that she has to study at a conservative all-girls private high school. Her hopes of finding a man and finally starting her first budding romance are smashed to bits as the student council enforces strict rules that don’t quite sit well with her.

After causing a scene on her first day of school, student council president Mei Aihara decides to intervene and deal with the issue herself. It’s pretty clear from the get-go that the Citrus protagonists, Mei and Yuzu, are two completely different people. While Yuzu is a bright and lively teenager with seemingly no sense of personal space, Mei is quiet and reserved and prefers to stick to the point instead of cutting around corners. The former is left speechless after their scuffle and is appalled by school’s practical and traditionalist system.

The first episode doesn’t share too much about Mei but illustrates that she strictly imposes and follows the school rules. She also seems to a bit more experienced when it comes to romance, evident by the fact that she is actually engaged. It’s clear that Citrus is going for the whole “opposites attract” trope, but it wouldn’t hurt to flesh out Mei’s personality in the long run. As of now, she seems to be a doormat with a typical backdrop about living in isolation.

While there aren’t plenty of plot twists throughout the first episode, it manages to set things up for the series pretty well. Obviously, the biggest question here is how the relationship between Mei and Yuzu turns out, seeing as how the pilot ended on a rather sensual note. It’s also worth pointing out that Mei and Yuzu’s potential romantic relationship would not only affect themselves but everyone around them. What would happen to Mei’s position as the student council president if the students and faculty found out? What would Yuzu’s friends think about her first real love being a woman? Perhaps these questions could act as a major driving forces that will keep viewers glued to following episodes, assuming Citrus will actually tackle similar issues.

Since romance plays such a big part in the show, it isn’t afraid to shy away from more risque scenes. The wonderful art style complements the messages Citrus wants to display, placing heavy emphasis on vibrant colors. The first episode alone includes some rather steamy and scandalous kissing scenes, so it’s pretty fair to say that the anime will dive into more intimate clips in the future. It will be interesting to see how far Passione can push the limits to these kinds of moments seeing as how Citrus is pretty mainline.

Despite its strong start, it’s a bit too early to say if the anime adaption of Citrus will turn out well. The show still relies on a lot of tropes to get by, but if they can manage to twist it around a bit, then there will be a lot of potential for the series. Another important factor Passione will have to consider is by staying true to the manga while carefully applying their own ideas to the anime, especially when it comes to the romance. All that said, I still recommend Citrus to anyone looking for an anime to watch this year.