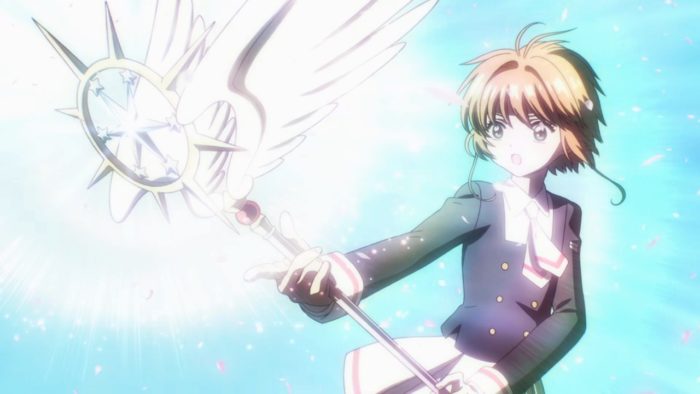 There are few things in this world as pure and earnest as the universe of CLAMP’s beloved anime and manga series, Cardcaptor Sakura. Even after 18 years since the final episode of the original anime series was aired, returning to Tomoeda and the Kinomoto household feels refreshing and blissfully nostalgic at the same time. For longtime fans of the series, the brand new Clear Card arc actually picks up right after the events of the original story, and the episode opens with Sakura getting ready for her first day at middle school. But not before Kero hijacks the show with a virtually useless and unhelpful (though still humorous) recap of the story so far, accompanied with a special appearance by Suppi.

Clear Card’s debut hits all the right beats you’d expect of your typical Cardcaptor Sakura episode. Sakura’s brother Toya still teases her ceaselessly, Sakura still lovingly says bye to the photograph of her deceased mom before leaving for school, best friend Tomoyo is still crushing hard on her, and Sakura’s still pretty bad at any subject that isn’t Phys Ed. Some things never change. As a hilarious side note, though, it looks like the mini teacher-student romance plot has been discarded. Clear Card makes no mention of Terada-sensei, and Rika has enrolled at a different middle school from the rest of her peers. I suppose CLAMP didn’t want to have to deal with that little story in the new series.

That trend of continuity extends into Clear Card’s main plot as well. In typical Cardcaptor Sakura fashion, our favorite magical girl has a mysterious dream one night of a hooded figure who somehow manages to turn all of her captured Clow Cards into clear ones, stripping them of their magical power. Sakura is gifted a new staff, too, which she’s then able to use to capture her first clear card of the episode, The Gale.

This is probably the episode’s weakest part overall as the setup for the new story feels like it’s just retreading a lot of old ground. Especially when you consider that Sakura’s already spent 70 episodes hunting down all the Clow Cards, turning them into Sakura Cards, and finally coming into her own with her magical powers. The introduction of the clear cards feels like an excuse to get Sakura started on a new hunt for cards all over again.

Despite all the familiarity, there is enough in this episode to make the Clear Card arc feel like the continuation of a great story rather than a rehash. As we’ve seen in the original series, the dynamics between Sakura and Syaoran have changed since their romantic exchange at the airport. Now that Syaoran’s back in Tomoeda for good, the interactions between the two characters feel more delicate. Sakura herself has clearly matured as a character – which you’d expect, after all the shit that goes down in the first series – and it’s heartening to see her actively seek out her friends for help because she knows they’ve got her back. Yue still resides in Yukito’s body to serve as her mentor, and Sakura doesn’t hesitate to reach out to Eriol and Mizuki for advice once she has her ominous dream as well.

The technology has also grown together with the series, as seen from the use of modern smartphones with near bezel-less screens. While the time period of the original Cardcaptor Sakura series was never explicitly made clear, fans assumed that it took place during the 90’s because that’s when it was aired. With the Clear Card arc events supposedly taking place right after Sakura graduates from elementary school, the jump from dated flip phones to full-screen mobile devices is a nice indicator of the series being refreshed to keep up with the times. Even if it could break the immersion for some viewers.

Madhouse has done a spectacular job with the animation as usual, with soft focus shots highlighting the reunion between Sakura and Syaoran as the familiar soundtrack soars into its crescendo. The show’s intro and outro (which is criminally cute) continues to be absolutely adorable with equally catchy song choices, and everything about this Clear Card debut is just about as feel-good as you’d expect it to be.

I’m still rather skeptical about where this new story arc will ultimately take us, but considering the series’ legacy of tackling heavier themes and relating them to the characters’ emotional states while still keeping everything feeling fun and comforting, there’s reason to be optimistic.