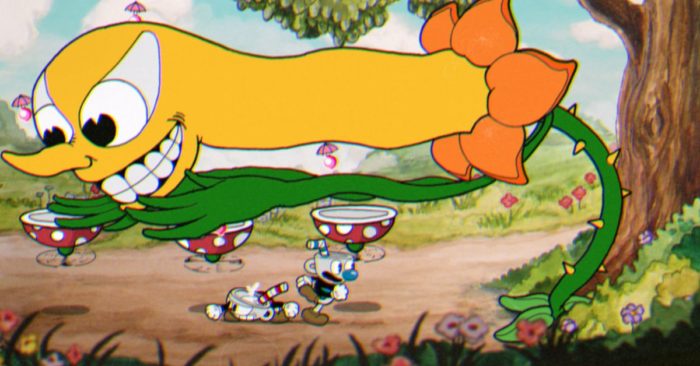 [Endless Playlist is a series of monthly articles where we pick a video game soundtrack for discussion, and try to provide a critical analysis of how it performs within the game it’s from, and how it holds up on its own. This month, we’re discussing Pluckhead, a strings arrangement album of selected music from Cuphead.]

With a game as demanding of your attention as Cuphead, it can be hard to pay the soundtrack its due attention. It’s no secret that Cuphead thrives on its distinct old-timey 1930’s cartoon look and sound, and that’s exactly what drew the interest of so many players in the first place. Never mind the steep difficulty curve and the need for precision in the gauntlet of boss fights, we’re here to be whisked away to another time and period. One where brass bands reign supreme, where cups and mugs come to life with cartoon charm, and deals with the devil might cost you your very own soul.

Cuphead truly comes to life when all its elements work in tandem. None will forget the Cagney Carnation fight where an evil sunflower rubs its hands (leaves?) together in animated mischief as its boss theme gradually roars into life. Players won’t soon forget Die House or Don’t Deal With The Devil either, where the vocalists sing Cuphead’s story to us. But while Cuphead’s soundtrack is certainly full of pizzazz and grandeur, Diwa de Leon wonders what that music would sound like if it was performed with strings instead.

Diwa, more commonly known as String Player Gamer on YouTube and Bandcamp, is popular for his musical interpretations of soundtracks like Undertale and The Legend of Zelda. With Pluckhead, he brings his strings expertise to the music of Cuphead by performing its most well-known tracks with a violin, guitar, and the occasional bit of percussion.

Instead of viewing Pluckhead as a VGM remix album, it feels more like a B-side or alternate release of Cuphead’s original soundtrack. You won’t find any wild musical interpretations here; Pluckhead is more or less a 1:1 arrangement of the game’s best tracks, except in strings. The beats and tunes are exactly the same, but the results are tremendous. If you enjoyed Cuphead’s soundtrack, you’re most probably going to love Pluckhead, though your mileage may vary depending on how much you like String Player Gamer’s strings performance and the vocal tracks.

Pluckhead opens with two different versions of Don’t Deal With The Devil, one done with a violin, and the other with a guitar. The soundtrack comes with two versions of the song as well, one with vocals, and the other is instrumental. I’m a firm believer of the idea that vocals are often just a distraction in a track (with some exceptions), especially when we’re talking about video game music. While the singsong narrative is a nice (and necessary, some would argue) touch to Don’t Deal With The Devil, I found myself more drawn to the instrumental version most of the time.

The instrumental version is primarily dominated by a piano. And while it is lovely, the Pluckhead renditions of the track offer a much softer sound to a beautiful track. The guitar variant, in particular, is the highlight here. The plucked guitar transforms the track into a more warm and inviting rendition of itself. It’s almost incredible how stark the changes are, considering that the only thing that’s changed here is the type of instrument being used to play the song.

Die House is another popular track among fans, but it’s also one where the vocals are so overwhelming it almost overshadows every other element in the song. Considering that there isn’t an official instrumental version of Die House, Pluckhead’s rendition of it is welcome. This is one of the heavier percussion tracks, though it never overtakes the lead violin, bringing us through a series of outstanding highs and lows in the track.

One of Pluckhead’s hallmarks is just how energetic the violin is. While most might often associate it with slower or perhaps more melancholic tunes, the violin truly comes alive in this arrangement, and it does justice to Die House’s more complex melodies.

Other percussion-heavy standouts on the album include Floral Fury, which is yet another popular one from the Cuphead soundtrack. It serves as the theme of Cagney Carnation, the aforementioned evil sunflower. The original track was already impressive enough on its own, but String Player Gamer’s take on the track isn’t shabby either. It’s a pretty blend of the violin and guitar though, again, the violin steals the limelight for the majority of the track.

The intense violin riffs, along with the maraca-like percussion truly helps to bring out the track’s inner salsa dance music vibe. The original Floral Fury was already catchy and finger snappy enough, but this strings rendition of it is a pretty awesome alternate take that you can dance to as well.

For me, one of the lower points in Cuphead’s soundtrack was Legendary Ghost. It wasn’t a bad piece of music; it just felt awfully bland in comparison to the rest of the gems on there. Pluckhead’s arrangement of the track doesn’t keep it from sounding just a tad bland, but the guitar offers it a more laidback and muted sound so it isn’t as jarring and overwhelming like the original was, what with the xylophone as its leading instrument and all. It’s still not a fantastic track in Cuphead’s stellar collection, but I did find that String Player Gamer’s rendition of it grew on me a lot more than the original.

There’s some jazzy goodness to be found in Pluckhead as well, and that comes in the form of Inkwell Isle Three. Ironically, this track features a motif from Legendary Ghost, but the soundtrack put a nice jazz spin on it to keep it from feeling as intrusive as its xylophone cousin did. Pluckhead tones down the track even more with a plucked jazz guitar. It still sounds smooth as hell, and the crispness in the reverb makes it sound far richer.

Floral Fury will probably be the highlight of Pluckhead for many listeners, but Inkwell Isle Three is a subtle, sleeper hit that really shouldn’t be ignored either.

All this isn’t to say that Pluckhead is a completely flawless album. There are a couple of misses in there, such as Clip Joint Calamity and Inkwell Isle Two. I should make it clear that it’s not a case of the music not sounding good or the production quality being poor; it’s more a matter of the renditions not quite being able to match the grandiose of the originals. In the case of Clip Joint Calamity, the strings aren’t as effective at creating the sense that “this is a real high class battle!” For a complex tune like this that’s meant to pump you up for an old-fashioned brawl, the brass band was a lot more well-suited for the job.

Despite that, though, Pluckhead is a compact collection of well-done string music that serves as a fine companion to Kristofer Maddigan’s killer soundtrack. String Player Gamer cherry picked some of the best tracks from the original soundtrack, and provides a simple but musically enjoyable spin on them. If you can’t get enough of Cuphead’s music, consider giving Pluckhead a listen. I couldn’t recommend it enough.