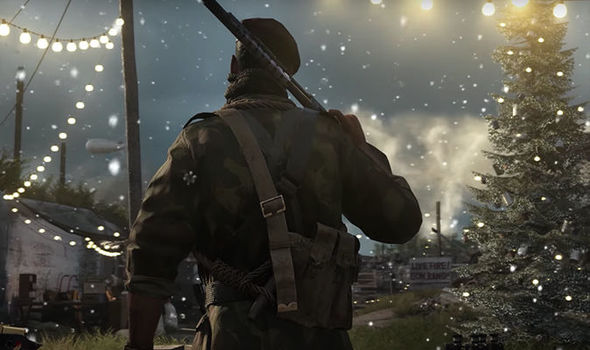 ‘Tis the season for winter and holiday-themed events for video games all across the spectrum of genres out there. From Overwatch to Rocket League, your favorite games are donning a holiday makeover just in time for Santa to slide down a chimney near you. Call of Duty: WWII is no different, as the game’s gotten into the holiday spirit as well.

The event went live on Dec. 8 and will last through Jan. 2, 2018. It includes five new weapons, decorations throughout your Headquarters area, an additional Quartermaster, a new remastered version of the Carentan map with winter aesthetics, and the return of Gun Game. The weapons are earned via the completion of specific challenges or by receiving a variant weapon via supply drop. These include the Gewehr 43 semi-automatic rifle, the Sten submachine gun, and the GPMG light machine gun. You can also get the Ice Pick and Trench Knife as well.

Headquarters has been decked out with holiday lights and a Christmas tree, with the errant piles of snow here and there. You can certainly tell how festive things are supposed to be, and now that the Headquarters area isn’t totally empty and devoid of other players, it looks a lot more like a party than it used to. But slapping a Christmas tree in a makeshift barracks or some snow sloshed around a map to give things a more “cozy” appearance doesn’t exactly make for appropriate holiday reparations.

Winter Siege supply drops offer chances at limited edition gear and the new Quartermaster is a cute addition to the event, but none of these augments, nor the return of the Gun Game, which finds players working to get kills with a different weapon each round, feel like a particularly great cap on a year where we’ve been bombarded with microtransactions, shady business practices, and technical gaffes that have hindered our enjoyment of several of the games we looked forward to all year.

Perhaps the most frustrating part about all of this is the fact that there should have been additional efforts focused on resolving the issues Call of Duty: WWII has been struggling with since its debut rather than adding more equipment and weapon you need to grind for in-game. After the removal of dedicated servers and the botched launched of the Headquarters multiplayer space during launch, fans felt jilted, and understandably so. And while many of these issues are being resolved and some have been restored in their entirety, a real festive bonus should have come in the form of goodies for players that don’t require constant logins or working toward random gear drops.

Call of Duty: WWII, while an excellent entry in the series thanks to its engaging campaign and fantastic multiplayer overall, has had its share of missteps and stumbles since launch. The next special event should take these problems into consideration and go the extra mile when it comes to keeping players happy. After all, players are the only reason it’s able to stretch its legs and experience the success it has thus far, and making consumers feel good about their purchasing decisions is an extremely important part of that. Plus, who doesn’t like more Christmas presents?