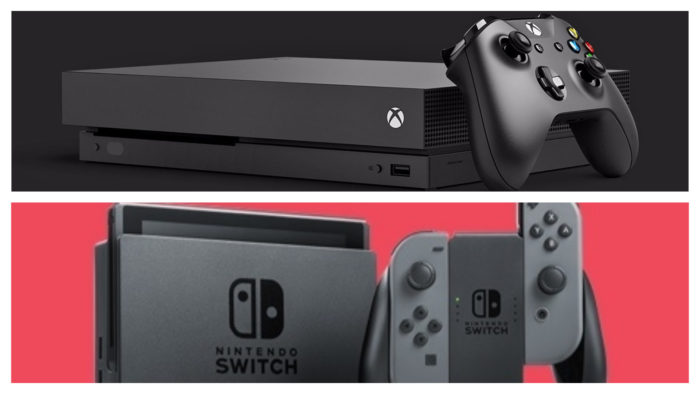 Is The Xbox One X Worth It If You Own a Switch?

The Xbox One X is here and gamers are going to have to make an unusual choice that they don’t normally have to make. They will have to decide if they want to pick up a true new mid-gen console or not. The PS4 Pro came out last year with some impressive specs of its own, but the Xbox One X is as powerful as advertised. If you want the most powerful home console currently on the market capable of making games look as good as they possibly can (PC excluded of course), then you’re going to need to pony up the $500 for the Xbox One X.

That said, if you already own a home console, in this case the Nintendo Switch, is it really worth the $500 to upgrade to the Xbox One X? Cost is relative and it’s going to depend if you can afford it or not. If money is no object, then sure grab the Xbox One X. But in the likely event that you’re someone that is on the fence and wants to be careful with their money, this guide is for you.

We’ll break down the biggest and most relevant differences between the two consoles and then give a verdict on whether or not the Xbox One X is still worth getting if you already own a Nintendo Switch.

The Xbox One X is, as advertised, the most powerful home console to date. When it comes to technical specifications it edges out even the PS4 Pro, so it certainly tops the Nintendo Switch as well. The Xbox One X comparison chart that came with our review copy of the console doesn’t even include the Switch, which can be perceived as a statement on Microsoft’s stance on seeing Nintendo as a competitor. While they certainly compete for hearts and wallets during the holidays, when it comes to the guts of their consoles, there really isn’t any competition.

The Xbox One X can take advantage of television sets that have 4K displays and HDR enabled to provide about as good a visual experience as you can get on a home console. It is also powerful enough to allow developers to get their game’s frame rates up to that magical 60 FPS mark. While games at 30 FPS play just fine too, you can definitely tell the difference when something is running at 60 FPS, arguably even more so than the jump from 1080p to 4K.

The Switch is no slouch, and many of its first-party games are so colorful and vivid that they look great in 1080p anyway, but on games that overlap between the two consoles, there are going to be times where the Switch version will feel a lot more sluggish, and look much less crisp than the Xbox One X version of the same game.

The Switch’s primary selling point hardware-wise is that it is a hybrid between a home console and a portable handheld that can be played in many different positions and situations not easily attainable by any of its competitors. It’s quite magical and until you have your hands on a Switch, it’s hard to explain in words just how cool it is to be able to pick up your home console, and take it with you on the go easily. It really is something that needs to be experienced to fully appreciate.

The Xbox One X does none of that. In fact, it can’t even offer anything even somewhat similar like the PS4 can do with the PS Vita. The Xbox One X, like its predecessors, is very much a traditional, rooted home console. Aside from trying to blow prospective buyers away with improved visuals, the Xbox One X will sell you on a robust online service with lots of community integration.

The new UI naturally blends in quick access to your games and apps with community features such as club updates, live streams via Mixer, achievement progress, screenshots, players looking for groups in games that you play. It sounds like a lot, yet nothing feels cluttered and it’s all easily accessible and not hidden away. Xbox One X also has access to many of the most popular applications such as Netflix, Hulu, and Spotify. This is another aspect where the Switch lacks and the Xbox One X can pick up the slack.

Xbox Live Gold, which is pretty much mandatory unless you only play single-player games, does offer a competitive free game program to that scene on the PlayStation 4. Whether one service is superior to the other is dependent on your tastes, but either way they are both miles ahead what the Switch offers which is just about nothing right now other than the basics. The only perk is that it’s free, and that will change in 2018.

Unlike the Switch, the Xbox One X also has direct backwards compatibility with some Xbox 360 and Xbox games. You can pop the disc right in and start downloading and playing like you would on your 360. Definitely a nice perk that can’t be matched by any other console right now.

The Switch’s supplementary features are quite bare bones, at least as of 2017. While we wait for the Switch’s expanded network features next year, the Xbox One X already has just about everything you would want in the meantime.

In this category, the Xbox One X and the Nintendo Switch have very little overlap, which is a good thing actually if you’re considering owning both systems. The Xbox One X has a small, but solid stable of exclusive games and has excellent support from third-party developers. There aren’t many non-PS4 exclusive titles from major third-party developers that you would miss if you owned an Xbox One. The Xbox One X also has the most flexible backwards compatibility features currently on the current-gen market. Many Xbox 360 games can be popped right into the Xbox One X and some may even receive an upgrade in visual quality. Original Xbox games are also now available, and new games are added to the list of backwards compatible titles consistently as well.

The Switch has the opposite situation going on. The Switch has incredible first-party support from Nintendo. Each and every year there’s likely going to at least be one or two Nintendo games that are gunning for Game of the Year consideration, if not more. However, whether or not the Switch will get consistent third-party support remains to be seen. Based on history, there’s cause for concern in that regard.

The Switch and the Xbox One X compliment each other very well. When it comes to the games that do overlap with a game such as NBA 2K18, you’ll be able to choose whether or not you want the best quality picture possible and better online support, or the ability to take it on the go using the Switch’s portable mode. You’d be able to play just about any game under the sun with the exception of PS4 exclusive games (which depending on your tastes, are quite good admittedly). Still, Xbox One X supported games do look pretty great, so factor that in when deciding whether or not the Xbox One X is for you.

The Verdict: Should You Buy an Xbox One X if You Already Own a Nintendo Switch?

The Xbox One X is about as good a complimentary console as you can get for the Nintendo Switch. They overlap on very few and thus compliment each other’s libraries well. They each have very different philosophies on what matters most to gamers, which is reflected in the strengths of each console. You’ll be getting a very unique experience on each, and won’t feel like you’re purchasing a redundant console. If you don’t own either yet, that’s a different conversation entirely, and you can check out our full review to get a better sense of which direction you should go in.

So on a very basic level, yes, the Xbox One X is still worth getting if you already own a Nintendo Switch assuming you own or are planning to get a 4K television set.

Consider these more specific questions and scenarios as well though:

Do you need the ability to play PlayStation 4 exclusive games? – If the answer to this question is Yes, then you might want to consider a PS4 Pro instead. Although from a hardware perspective, we prefer the power and network features the Xbox One X offers, all of the teraflops in the world won’t magically allow you to play Persona 5 or any other PS4 exclusive on the Xbox One X or the Nintendo Switch. So definitely factor that in.

Is 4K gaming something you really care about?: If the answer to this question is No, then it’s probably not worth getting an Xbox One X. It does offer some great perks, but at the end of the day, there’s nothing wrong with the Xbox One S either. If you really don’t care if your game doesn’t look as good as it could (or don’t own a 4K set), save yourself some money. Grab an original Xbox One or a PlayStation 4 based on the exclusives if you want another home console. If you do care though, then there’s no better option for home consoles power wise than the Xbox One X, so go for it.

Are you big on PC gaming?: If you don’t really play games on your PC, or don’t have a rig capable of playing the latest games at a high visual quality, then yep, the Xbox One X is still worth getting. However, if you have a powerful PC gaming rig, and don’t mind playing on your computer instead of a home console, consider seeing if that’s an option you want to give a go before investing in the Xbox One X.

Do you want access to some of your favorite Xbox 360 games again? – If you have an extensive physical collection of 360 games that you wouldn’t mind being able to play without having to hook up said 360, then the Xbox One X is an even more attractive option.