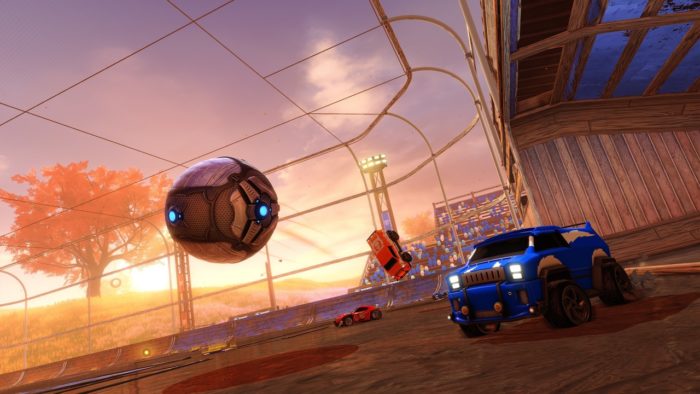 Taking the world by storm in 2015, Rocket League continues to be one of the most fascinating ways to play “soccer” in a video game. It’s never a dull moment as vehicular athletes flip through the air and somersault along the ground in this acrobatic sport. And now that it’s on the Switch, the game gains some portability. Rocket League never needed it, but it only adds one more positive element to an already remarkable game.

Rocket League’s port to Nintendo’s newest console is a result of Panic Button, the developer who ported 2016’s Doom onto the Switch earlier this month. Much like Doom, Panic Button has stripped some of the detail from Rocket League in order for it to run more smoothly on the Switch’s hardware. Unlike Doom though, the lack of detail is of very little importance in Rocket League. Admittedly, some of the more detailed arenas (like Champions Field and Neo Tokyo) lose a lot of their sparkle. Neo Tokyo takes a huge hit, the scenery outside the arena’s dome appearing like a conglomerate of polygons. However, considering how fast the cars race (and how infrequently the player is ever looking outside the arena) it’s not really an issue.

The visuals take even more of a nose-dive when playing the game in handheld mode. The colors begin to melt together in the background, making it difficult to discern the positions of the ball and the other players when far away. More than once, I missed an aerial layup or easy freestyle. I rarely attempt such goals from across the field though, and I doubt I’ll start now. The game is fine when docked though. I hit all of my aerial hits when playing on the big screen.

I have roughly 750 hours logged into Rocket League on the Xbox One, so I was a little worried about jumping into the game on Switch and finding no one at my skill level to face. I shouldn’t have worried, as it’s all been taken care of. The Switch version of Rocket League shares servers with the same players on Xbox One and Steam. There are plenty of players of all skill levels, from beginner to veteran, to find online. Best of all, because of this cross-platform play, players never have to worry that they might go online and be met by empty servers.

All of Rocket League’s updates throughout the past two years come with this new port. Players get access to every battle car, from the original Octane to the Batmobile. The game modes Hoops (basketball), Snow Day (ice hockey), Rocket Labs, Drop Shot, and Rumble are all there too, as well as the Training mode that allows players to practice different types of shots and defensive moves. Recent updates that made Rocket League significantly easier to play, like see-through goal posts and regulation maps in Competitive, are also all there. If you haven’t played Rocket League since 2015, then this version will be an altogether different beast to what you remembered.

Unique to the Switch version of the game are two new battle cars: NSR and Samus’ Gunship. The former is Mario red when on the orange team and Luigi green when on the blue team. It fires Superstars as its boost trail and makes the Super Mario jumping sound effect when it leaps into the air. It’s adorable. Samus’ Gunship fires the bounty hunter’s signature Wave Beam as its boost trail. It matches Samus’ Varia suit on the orange team and her Gravity suit on blue. Between the two, I’m a bigger fan of Samus’ Gunship. It’s got a tight turn radius, and its flat surface makes it a prime candidate for playing the ball while it’s still in the air. It feels a lot like the Breakout. The NSR handles a lot like the Octane, also having a tight turn radius, but having a tall hit box that makes it a good pick for juggling the ball and striking. The Switch version of the game also comes with both Mario and Luigi hat toppers that can be thrown onto any car.

New cars aren’t all that the Switch version brings to the table. Like I said before, the nature of the Switch allows for play on the go. This includes splitscreen, but, as you can imagine, it’s very difficult to play with two people on such a tiny screen. I wouldn’t recommend it, but it’s nice that the option is there. Gamers can play with any of the Switch’s controllers too. This, surprisingly, includes each player using a single Joycon. Such a tiny controller shouldn’t work, yet, much like Mario Kart 8 Deluxe, it does.

Rocket League on Switch is everything that Rocket League has to offer, with added portability. Some new battle cars help differentiate this port from other versions of the game, but, honestly, Rocket League on Switch would still be fantastic without them. If you’re already a fan of the game, then buying the game again on Switch will allow you to continue your rocket powered shenanigans from anywhere you desire. If you’ve yet to pick up the game, than I highly recommend you start here. It’s unfortunate that you won’t get to see the individual blades of grass on the field curl beneath the wind, but all of the aspects of Rocket League that made it a phenomenon two years ago are all still here. And that’s all that matters.