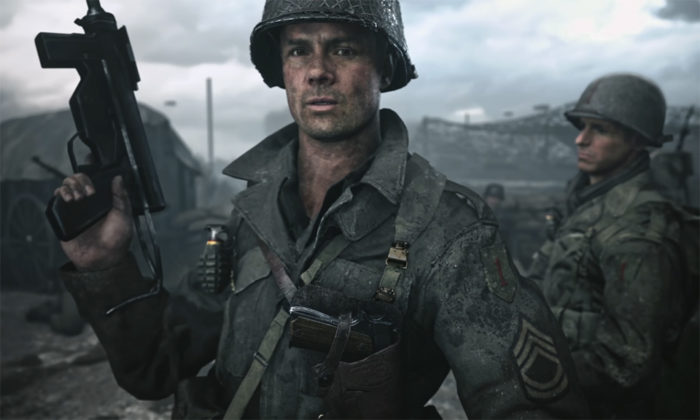 Call of Duty has ridden the line of absurdity with its presentation since Modern Warfare. There’s always been a little feeling of tongue-in-cheek humor blurring the lines between a melodramatic campaign and an homage to 90s action films. Infinite Warfare rolled that feeling back a little bit, and with Call of Duty WW2 it’s almost entirely gone.

Because the previous Call of Duty games have taken enjoyment in the over-the-top antics of the campaign, the multiplayer has never really felt atonal. My tradition is to have a fun six to eight-hour romp through the single-player, and then start sinking my teeth into multiplayer after I’m sure the servers are stable enough to play on. With CoD: WW2 though, it’s a lot harder to transition from the very somber campaign into a multiplayer that is more of a spectacle than ever.

If you don’t know, the Call of Duty: WW2 campaign follows a squad of soldiers in the 1st Infantry Division from the landings at Normandy all the way to the crossing of the Rhine. Unlike the majority of the single-player stories since Modern Warfare, there’s no campiness here. WW2 goes for a Band of Brothers and/or Saving Private Ryan feel, and levity is nowhere to be found.

It’s odd then, to complete the campaign, which ends on a very heavy note and pop in the new Headquarters mode to start equipping your soldier and searching for matches. Your HQ (when it’s actually working right) is a social hub where you can hang out with other players, open supply drops, get orders, and so on. You can also have a 1v1 fight with others while the rest of the people in the HQ watch, or hang out at the shooting range. It’s basically a clubhouse that just happens to be set up on Omaha Beach.

What makes the HQ experience even more surreal are the supply drops. This game allows others in your HQ to see your loot boxes open with you. So once you’ve selected one in your menu, and pop smoke to call it in, there’s just a huge box that drops from the air. Once the box drops almost explosively onto the beach, it bursts open, and three cards shoot out and reveal which items you’ve received. Where it gets really wild is when there’s a whole headquarters full of people, and there’s just a rainfall of supply drops popping open all over the place.

I’m not saying that anything should change to make the campaign fit more with the tone of the multiplayer, or vice-versa, but to flip the switch from solemn to zany is jarring. Fortunately, the multiplayer is outstanding compared to the last few entries in the series, so when First Lieutenant Xxb0ngw4terxX pops a supply crate and gets a sick epic pistol grip, you’ll be right there celebrating with them.

I think Sledgehammer and Activision should just shed any claim that the multiplayer is historically accurate or relevant and just say it’s a “WW2-themed” game. Besides the campaign, there isn’t much to tie this game to WW2 except for the locations and guns. If they really wanted to give it more of that WW2 feel, they should have used real division patches instead of the weird generic ones they have now. Each division could have its own unique abilities, and each specialty (Infantry, Armor, Airborne, Mountain, Expeditionary) could have several historical divisions available to level up and use.

This is all just my two cents though. I think there’s a lot of disparity between the tone of the campaign and multiplayer, and I believe that Sledgehammer should have embraced that authentic WW2 feel a little bit more. However, Call of Duty WW2 is a fun game, besides all the technical errors that have plagued the launch, and I look forward to seeing what Activision and Sledgehammer add to it over the next year.