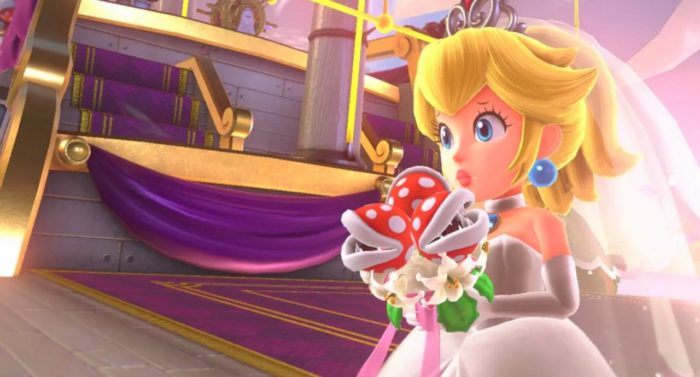 Super Mario Odyssey is almost here and there’s a lot to look forward to. Aside from traveling to different kingdoms, collecting Power Moons, capturing monsters, and playing all sorts of mini-games, Mario has his hands full with another world-hopping adventure. This time, Bowser means serious business as he plans on marrying her for some unknown reason, be it political or if he really does love the princess. Whatever the case, Peach doesn’t want to push through with the intimate ceremony for obvious reasons.

And while it might seem like she’ll just be yet another person to save in Super Mario Odyssey, what if she turns out to have a much bigger role? Moreover, could there be some sort of possibility that the princess might actually be playable in the game? It’s true that the idea might seem a bit farfetched, especially since she’s almost always used as a plot device in most mainline Mario games. However, there are a few hints that suggest she could be playable in Super Mario Odyssey or at least have an expanded role.

Princess Peach, in retrospect, has always been the typical damsel in distress character who usually relies on others to get things done. As the princess of the Mushroom Kingdom, she has other royal duties to fulfill when she isn’t getting kidnapped. Similarly, Peach has her own subjects who do the heavy lifting and she always looks to Mario as her savior in past games. Things are a bit more different now as Nintendo has been expanding her role and making her a bit more independent.

In Super Mario 3D Land, Peach attempts to escape from Bowser’s Castle and even manages to knock out a few Goombas before ultimately getting kidnapped again. The princess is also a playable character in Super Mario 3D World and in popular spinoffs like Super Mario Run, Mario + Rabbids Kingdom Battle, and Super Smash Bros. She has even gotten her own platforming title called Super Princess Peach back in 2005 on the Nintendo DS. This game reverses their roles, with Peach setting off on her own adventure to rescue Mario. Super Princess Peach went in-depth on the character by showing off her unique abilities and that she was a perfectly capable character (with Perry’s help, of course).

While it seems like Nintendo might have downgraded her character in Super Mario Odyssey, one interesting tidbit from the recent Edge review mentions, “Peach, for her part, is no damsel in distress and her role expands in the post-game, although not in the way you might expect.” All we know so far about her role is that she’s Bowser’s bride-to-be, but that statement hints that she might actually have a deeper role to play in the game.Since she’s already tried to escape from Bowser’s clutches in the past, it wouldn’t be too surprising if she will do it again in Super Mario Odyssey. Nintendo could go even further and make us control Peach during her attempted escape. They could include this short segment during a certain point in the story and let us play around with the princess for a bit.

One other interesting thing to take note of is that her role will supposedly expand in the post game. Most people would probably expect her to be playable after reading this, but the disclaimer, “although not in the way you might expect” might seem to contradict the idea. If anything, she could just be another important NPC who gives you important quests for valuable items. On the other hand, she might also turn out to be a side character who you can play as in certain mini-games. Maybe we can collect coins across New Donk City by floating across buildings, or only Peach can reach certain Power Moons with her special abilities?

Review aside, another factor hinting at a playable Peach is her mysterious headgear. Like Mario, she also gains a new ally called Tiara. This crown-like headpiece is actually Cappy’s little sister who was also kidnapped by Bowser. For the most part, Tiara acts as Cappy’s motivation to team up with Mario so he can save his sister. While some may argue that she’s just another plot device to set up Mario and Cappy’s relationship in Super Mario Odyssey, Nintendo could have gone with a much simpler reason for why Cappy joined in on the adventure. One easy explanation could be that Bowser ravaged the Cap kingdom, forcing Cappy to side with Mario. Alternatively, he could have just helped Mario for the sake of lending him a hand, similar to Mario and F.L.U.D.D.’s relationship in Super Mario Sunshine.

This is Tiara, Cappy's little sister. She lived in the Cap Kingdom until Bowser stole her for Peach's wedding outfit. #SuperMarioOdyssey pic.twitter.com/433gJ6e7TJ

While we still know very little about her, Tiara might have been included to expand Peach’s role and flesh out Cappy’s backstory in Super Mario Odyssey. Since they are siblings, Tiara might even have the same power to capture objects and enemies. This can easily be incorporated into Peach’s possible playstyle since controlling enemies is a major feature in the game.

Nintendo has so much material they can work with in regards to Peach’s history and abilities. Either way, there will still be plenty of activities that will take up your time in Super Mario Odyssey even if she turns out not to be playable. From Edge’s review, we can at least hope that Nintendo will continue her steady role as a more complex and growing character. That, and hopefully she’ll finally tie the knot with Mario.