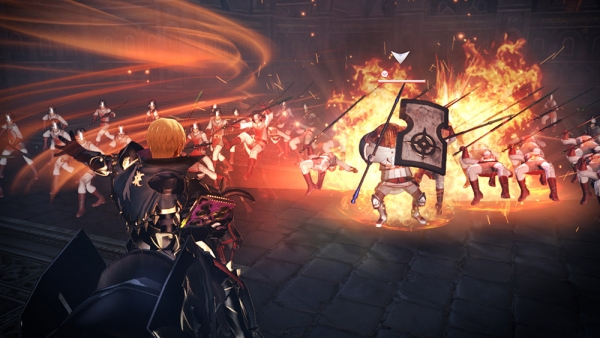 Fire Emblem Warriors is Koei Tecmo’s latest Warriors-style crossover game. They’ve done similar titles in the past including Hyrule Warriors and Berserk, and Fire Emblem is their latest outing. It’s definitely a strange match-up, especially when you consider the fact that the Fire Emblem series is iconic for its tactical RPG combat. Combine an esteemed series like this with the button mashing, hack-and-slash style of Warriors, and you’ve got a strange marriage of sorts. However, you shouldn’t write it off so quickly if you’re a fan of Intelligent Systems’ series.

First off, I should note that if you’re an old-school Fire Emblem fan, this probably isn’t the game for you. The majority of Fire Emblem Warriors’ roster comprises of characters from the recent games, Awakening and Fates. If you’re hoping to see some old faces from games like Sacred Stones or Radiant Dawn, you’re out of luck. Warriors features a handful of characters from Shadow Dragon, but not much else. Simply put, if you didn’t like the recent games in the series, you’re most probably not going to enjoy this one.

Having said that, Fire Emblem Warriors does do a fairly decent job of incorporating some series elements into the Warriors formula. One of the biggest additions is the support conversation system. While ranking up your support level between two characters doesn’t seem to enhance their strength in battle a whole lot, players are still rewarded with gifts and unique materials that can be used to upgrade Crests in the Crest Market. The Crests are essentially an upgrade system that allows you to improve a character’s offensive and defensive capabilities, and some nodes can only be unlocked with unique materials. So, yes, it’s definitely important to pair up your units in battle whenever possible as you can receive gifts that strengthen your roster.

In addition to that, reaching the max support levels also unlocks a special conversation between your paired units. This is one of the most popular features in the recent games, and it’s no surprise that Koei Tecmo opted to include this in Fire Emblem Warriors as well. While you can’t get your characters to marry each other and make power history babies, this is still a really nice touch.

There are several other Fire Emblem-specific features that have also made it into the game, but they feel a bit watered down. The class promotion system, for instance, lets you use a Master Seal on a character who’s at or above level 15. However, this simply powers up their stats without changing anything else about the character. There are no advanced classes to choose from, and their weapon types remain the same. It’s still important to promote your most frequently used characters, but this particular feature feels rather tacked on because of how little it adds to your characters.

If you enjoyed the weapon triangle system from Awakening and Fates for some reason, you’ll be pleased to know that it also comes into play in Fire Emblem Warriors, though its effectiveness is varied depending on the weapons you’re using. Swords are still strong against axes, and axes are strong against lances, but I never had much of a problem fighting an enemy with a weapon type I was weak against. It would take me a bit more time to wear down an enemy with a stronger weapon type, but there didn’t seem to be much difference, at least on Normal difficulty. Bows, however, are a different matter altogether. Just like in Awakening and Fates, bows are incredibly deadly towards flyers, and archers can easily two-shot characters like Camilla and Cordelia.

Fire Emblem Warriors has other nice Fire Emblem-isms like character voiceovers telling you that you’re up way too late when you boot up the game in the middle of the night, and features like the Convoy where you can optimize your equipment. There’s also a tactical element to the game, where you can open up the map in battle to order your other characters around, but aside from a handful of missions that really require you to micromanage your units, it doesn’t come into play all that often.

All in all, where Fire Emblem Warriors is for you largely depends on two things: whether you’re hoping for a glorious crossover game that provides equal screen time for older characters, and whether you’re fine with plowing through a story campaign with hack-and-slash combat that most definitely overstays its welcome after the first few hours. Fire Emblem Warriors is one of the best and most polished Warriors games I’ve played in years, and if you just want a fun little adventure with your favorite faces from Awakening and Fates, this is a good purchase.