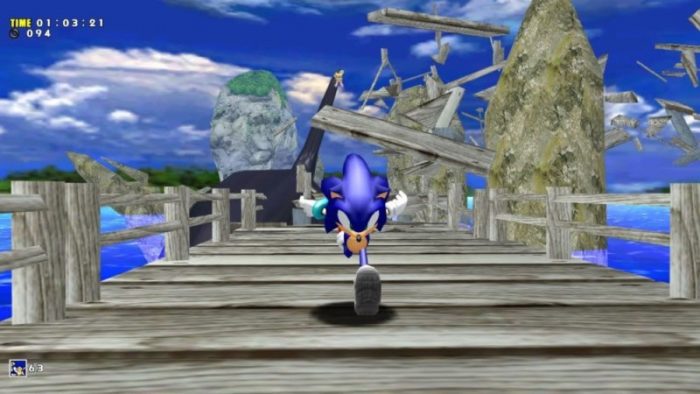 The average gamer that dabbles with Sonic the Hedgehog games, might remember the Sonic Adventure games. They might have played it on the Dreamcast or through one of the re-releases, but either way, most people don’t really think about Sonic Adventure that much. In the hardcore Sonic community though, there are a faction of fans that hold the Adventure games in very high regard.

There’s something about this awkward edgy teen phase of the series that has stuck with many fans, despite it not holding up very well in 2017. To some of these fans, it’s held up as the premiere era of Sonic games; and even though there has been a generally warm reception to the fast-paced boost heavy “Modern” era style, and more recently, the return to “Classic” Genesis 2D gameplay, there are many that want Sega to revisit the “Dreamcast” or “Adventure” era which includes games like Sonic Adventure, Sonic Adventure 2, Sonic Heroes, and depending on who you ask, Sonic the Hedgehog ’06. But why is this era that many casual and non-fans have largely forgotten so revered? Let’s dig in.

Sonic Adventure marked the first time the blue blur got the true 3D platformer experience (not counting 3D Blast which was more of a spin off). At the time, the roster of Sonic “friends” that mainstream fans could identify was quite small. Sonic, Tails, Knuckles, and maybe you’d know about Amy if you played Sonic CD. That was it for the most part for the average fan. Tails and Knuckles’ alternative gameplay styles in S3 & K was well received, and with Sonic Adventure, the Sonic Team doubled down and added even more new playable characters, and thus began obsession of “friends” being added into new games.

Here’s a quick rundown of new playable characters that were added throughout the Dreamcast/Adventure era of games before Sonic Unleashed returned the focus to just being on Sonic: Big the Cat, E-102 Gamma, Shadow the Hedgehog, Cream the Rabbit, Blaze the Cat, Silver the Hedgehog, and Marine the Racoon. Amy Rose and Dr. Eggman, although not entirely new, were made playable for the first time during this time period. This also doesn’t include characters that were added in spinoff games such as Jet the Hawk, Wave the Swallow, and Storm the Albatross from Sonic Riders.

It’s a lot, and about half-way through this process the addition of new animal friends became a feature that was ridiculed by critics and fans as well. The negativity around these new characters was amplified by a perceived (and mostly true) lack of quality around the gameplay, and story/character development in these games. It got dire enough to the point that the series essentially needed to be rebooted (again) with Sonic Unleashed.

Sonic Unleashed wasn’t a perfect game, but the day time stages in the game introduced the modern gameplay which was refined over the course of a few more titles, and while still not for everyone, has at least some support from critics and the wider community as an enjoyable way to play Sonic in 3D.

Since this pivot, the characters that were added throughout this era have largely been abandoned. The official Sonic the Hedgehog Twitter account has even accepted and embraced the fact that characters like Big the Cat are basically a meme now.

It’s not universally accepted by the community though that this was a dark era for the series. In fact, for some, especially those that started in the Dreamcast/Adventure, the animal characters, and the more complex stories are among the, if not the, most enjoyable feature of the Sonic games.

Many people and fans, especially those that started with the minimalistic (story wise) games of the Genesis era, hold the idea that a Sonic games need a deep story and lots of characters in a negative light and welcome change of direction. However, Sonic is more than just video games; it is a franchise that also includes a multitude of comics, movies, and animated cartoons.

In these universes, character diversity and more mature story lines are accepted, and is the major part of their allure. There is a very passionate fan fiction, OC community inspired in large part by its extended universe. So when the video games started going in that direction during the Dreamcast/Adventure era, it was welcomed with open arms by these fans.

Sure, the gameplay might not be perfect, but for these fans, the appeal was more about seeing their favorite characters, new and old, interact and go on adventures. It’s why despite the widespread disdain for ’06, there are still a lot of apologists for that game that exist (and yes, ones that aren’t just trolling). They genuinely enjoy ’06 because at the top of their priority list you won’t find fast-paced gameplay and solid platforming. Rather they want to see a diverse cast of anthropomorphic characters with unique gameplay styles go on an adventure that provides them a colorful world for them to explore and interact with. Using that criteria, games like Sonic ’06, Sonic Adventure are a success in many ways.

Alas, for these fans, Sega has backed off hard since Sonic Unleashed for their mainline games, reverting mostly back to the original cast of Sonic, Tails, and Knuckles for the most part.

That said, Sonic Forces feels like another attempt to once again marry fans that are solely into the games, with those that appreciate the extended universe. Forces will feature both Modern and Classic Sonic, but will also allow players to create their own OC creations, will include modern friends in the story and will also feature Shadow as a playable free-DLC character. Forces also will have a story line that is much darker and reminiscent of the comics and animated cartoons. If this experiment is well received, it could be the best chance fans have of getting a true Sonic Adventure 3.

Sega and Sonic Team have gone through a lot, and presumably, learned a lot since the Dreamcast/Adventure era. With the release of Sonic Mania they have officially splintered out a separate series for fans that just want a continuation of the Genesis games and nothing more. Given how well it was received, it probably won’t be the last Genesis-style game we see. With those fans satisfied, the opportunity to revisit incorporating elements of the story heavy extended universe into the more modern games without having to worry about catering to older fans is here.

If Sonic Forces does well both critically and commercially, a true Sonic Adventure 3 could at least be something worth discussing over at Sega (Update: It was a bomb critically, welp). Recently, the head of Sonic Team, Takashi Iizuka, admitted that while Sonic Adventure 3 might not be “an advancement of the series” (via Silconera) if they could find a way to make the gameplay evolve to where it made sense “then you might see an Adventure 3 come out.”

If Sonic Team could effectively put together everything they’ve learned since hitting rock bottom with ’06, there’s a blueprint there for a Sonic Adventure 3 that could actually work and also advance the series like Iizuka mentions. In a lot of ways, Sonic Forces is a test-run for Sonic Adventure-like elements such as varying play styles, and actually having a story line featuring Sonic friends outside of the Genesis crew. If that works out, it’s not a huge leap to Sonic Adventure 3 at that point. Add a hub world with interesting things to do, add some more playable characters, and of course a Chao Garden, and you have a game worthy of carrying the fabled Sonic Adventure 3 banner.

Although the games don’t hold up that well these days, they were great for their time, and the name clearly carries a lot of nostalgic weight still. While the Sonic Team right now is probably being extra cautious about not committing to anything that could be perceived as going backwards, the Adventure games are one of the few titles during the dark age that hasn’t been tainted. Like Mania did for the 2D games, Sonic Adventure 3 could be a triumphant return to form for the 3D series if done right. Although narrow, there is a pathway to it if the Sonic Team desires to pursue it.