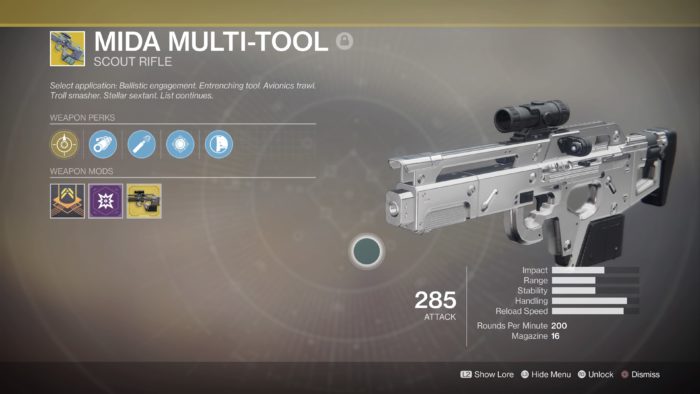 Destiny 2 is off to a fantastic start. While there are some issues for sure, like the first Destiny, there is still plenty of time to iron out the wrinkles discovered post-launch over the course of patches and expansions.

One problem though that has quickly risen to near controversy level is that of the Mida Multi-Tool. Mida Multi-Tool is an exotic scout rifle which was in the first Destiny. Known more for its PvP prowess in the Crucible and Trials of Osiris, the exotic scout was an integral part of many metas over the course of its lifespan and is regarded as one of the few exotics that could compete with some of the more powerful and popular legendary weapons.

What Mida Multi-Tool does (in both games) is provide its user with a speed boost while aiming, along with access to the radar normally hidden while looking down the sights. This is a tremendous asset as it allows players to overcome the two disadvantages of aiming down the sights: moving slowly and not being able to see movement around you. So as long as you are more or less where you want to be positioned, you could just always be looking down your sights and get the jump on players that need to spend an extra split second or two drawing their weapon and aiming at you. Plus of course, it is powerful, and if you are a good shot, you can easily overwhelm opponents especially with some team shooting to support you.

The Destiny 2 PvP meta right now, especially in competitive and Trials of the Nine modes, is already dominated by team killing with the improved scout rifle class of weapons, chief among them being the Mida Multi-Tool for all of the same reasons that it was so successful in the first Destiny. It also doesn’t hurt that most of Destiny 1’s special weapons have been moved into the power weapon category. You can’t as easily just counter a Mida Multi-Tool by out sniping, or flanking the user with a shotgun or fusion rifle unless you find a power weapon ammo spot, which now only one player can use at a time.

Here’s the point though. As you may have ascertained from the title of this article, the issue isn’t that Mida Multi-Tool is a great gun. Unless you’re playing at the very highest level of play, any gun can be countered by someone with better skill. It’s not much different than lower league players in games such as League of Legends and StarCraft 2 stressing over balance issues that really only impact the top 1% (or less) of players. For the most part, if you and your team are better, you should win. The power of the weapon is kind of irrelevant unless it’s just absurdly broken which Mida Multi-Tool is not.

The main problem is that anyone that puts at least a little bit of effort, can get this (still very good but not broken) weapon very easily. The Mida Multi-Tool is obtained not by a random drop, but through arguably the easiest exotic quest in the game. All it takes is going out, killing a handful of enemies a certain way and breaking down five blue or rarer scout rifles. Nothing that requires any real test of skill. The only part that might take some time is getting the five scout rifles if you didn’t just save them ahead of time.

So instead of seeing just a couple of Mida Multi-Tools out there and being able to plan a strategy around it, it’s very common to see entire teams equipped with arguably one of the best weapons in the current meta. Even though there are better guns, it’s a lot simpler to just throw Mida on. It’s strong, easy to use and easy to get.

This made last week’s Trials of the Nine very dull and predictable. This isn’t necessarily a new problem, as Bungie has battled weapon diversity since Trials of Osiris debuted during House of Wolves. But at least guns like Thorn, The Last Word, and even Destiny 1’s Mida Multi-Tool were more difficult to obtain and there was a little bit of forced weapon diversity because people just simply couldn’t use it because they didn’t have it.

It remains to be seen if Bungie will acknowledge this issue before Trials of the Nine this weekend, or if they have any problem with it at all. Considering their disdain for one weapon/type dominating the scene in the first Destiny, it’s likely that it will be addressed at some point in the near future.

How can Bungie fix it though? The most effective way would be to just delete Mida from the game, but that’s incredibly unlikely since the backlash would be insane. Maybe if they coupled it with a free exotic or two of the player’s choice they could pull it off, but still, hardcore fans of it will be super upset. Another route could be to expand on something that’s actually already in Destiny 2. There are a few legendary weapons that are tied to quests and can be re-bought from the quest giver (Drang, MIDA Mini-tool, and Man O’ War). If Bungie could implement more quests of that ilk that offered viable PvP drops, it would add to the pool of easy to obtain PvP weapons and may help lessen the prevalence of the MIDA Multi-Tool.

It’s hard to nerf Mida because it doesn’t really do any one thing super well. Its perks are rather simple. It’s the combination of everything, the stats, speed, and radar that make it so well rounded and great. And again, it’s not that Mida is overpowered, it’s that it’s super easy to get. Unless Bungie decides to delete it, you can’t put the toothpaste back in the tube so to speak when it comes to rectifying how easy it was to obtain for the first three weeks.

I’m hard pressed to come up with a perfect solution that would satisfy even the majority of people, and I wouldn’t want to be Bungie if and when they announce what action they are going to take.