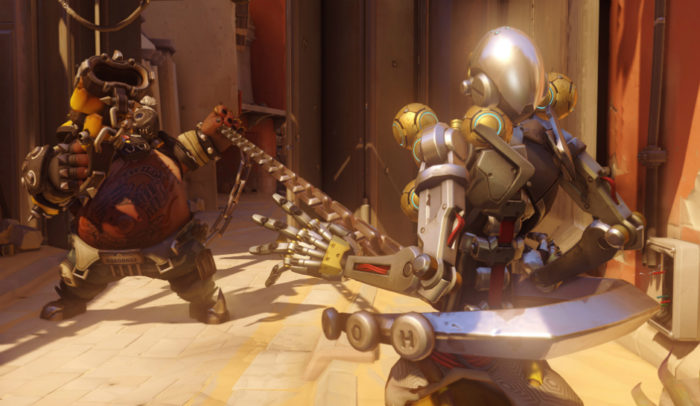 Overwatch’s Tank character Roadhog has been in contention for a while now as to how to keep him balanced and fair no matter what the current meta is. For the year or so since launch, he has bounced back and forth between buff and nerfs, mostly pertaining to either his hook or the damage capabilities of his Scrap Gun.

For a while there, Roadhog’s hook was pretty broken. Back in Overwatch’s earlier days in 2016, either due to glitches or the hitbox size of his hook shot, Roadhog was often able to pull enemy players through or around walls even if they went out of view after the initial hook. For exmaple in the gif seen below, Roadhog is able to latch onto the enemy Pharah just as she is reaches the bottom of the window on Lijiang Tower, however the hook still stays connected despite her going out of his line of sight and thus the game lurches her around the next available corner in a jerky and nonsensical fashion.

In response to the frustration players were having with Roadhog’s physics denying hook abilities, he was nerfed so that if his hook landed and the enemy went behind an object, it would detach just as logic would dictate. Although this undoubtedly frustrated Roadhog mains, as a lot more now relied on using their hooks in strategic and object free locations, rather than just seeing red and throwing the hook out there to hope for the best. However, there were still complaints for both users and fighters of Roadhog that his new hook was pretty finicky, since mobile characters (like Lucio seen below) could keep their forward momentum and duck behind whatever was near even if the hook landing was pretty legit.

The thing that makes Roadhog’s hook so powerful was his ability to one-shot the majority of squishy characters as soon as he pulled them towards himself. If you were a Mercy and got hooked by the enemy Roadhog, might as well reach for your snack and wait for the respawn as the chances of getting out of that were slim to none.

Roadhog was able to one-shot 17 out of the 24 heroes (before Doomfist), until some changes came in late May 2017 that made him much more inconsistent. His Scrap Gun now fired 30% faster and the clip size was increased from four to five, however it now does 33% less damage. According to a YouTube video by Force Gaming that tested out these changes when they first hit the PTR, Roadhog could no longer consistently one-shot Genji, Reaper, Hanzo, Sombra, Mei, Ana, Lucio, and Mercy using the hook, fire, melee combo. This may seem fair as being one-shotted can be a pretty frustrating experience, but essentially it caused Roadhog to become a much less viable pick since his kit relied so heavily on landing hooks and getting close-quarter kills due to his limited mobility and bullet-sponge sized body making him so easy to kill in team fights.

In the current Overwatch Dive meta, wherein mobile characters are preferable due to their ability to jump into the fight, pick off a kill or two, and jump back to regroup and push forward, Roadhog is a much riskier tank choice compared to the currently popular Winston or D.Va choice. Likely with this in mind, Blizzard has announced some new buffs are being play-tested for Roadhog that intend to help his survivability if you are not able to land those crucial hooks but still want to back off without dying immediately. The changes include 50% less damage taken when he is using his self-heal Take A Breather ability, and like Bastion, he will be able to move at full speed while self-healing. In the Overwatch forums the game’s Principal Designer Geoff Goodman says, “These two changes combined certainly make him significantly more difficult to kill, while also allowing Roadhog players to be much more aggressive when trying to find a hook target, knowing they can survive a lot more easily.” These changes are said to come to the PTR as soon as possible.

These changes seem like a good step towards making Roadhog a stronger character and overall solid tank pick. When you think about all the tanks, they all have some means of passively protecting themselves at close range besides Roadhog. D.Va has her defense matrix, Winston can jump and/or place his barrier, Zarya can bubble herself and back off, and Reinhardt and Orisa have their shields. If Roadhog attempted a hook, missed, and the fight started not going in his favor, he has a very hard time disengaging and backing off to regroup compared to literally every other tank option. Allowing him to not only take less damage, but move freely when he heals with help him compare to the rest of the tank options in terms of mid-firefight mobility and survivability.

It’s hard to say whether these changes alone will be enough to make Roadhog viable again, but they are definitely a step in the right direction. If Roadhog’s hook and damage output are going to be nerfed, then other improvements will have to be introduced in order to compensate. He is a particularity hard character to balance as too strong makes him a hookin’ and one-shotting machine who is no fun to play against, and too weak he is a big, fat bullet sponge whose last resort for escape is to stand still to heal, making him even easier target to finish off. With the Dive meta in mind, improving his mobility is the most obvious and necessary change to make Roadhog a fun character to play without breaking walls with his hook or walking around one-shotting every squishy he sees.