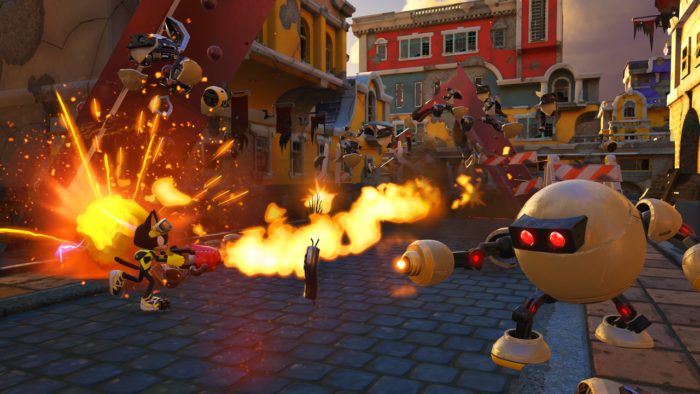 After trying out Sonic Forces’ Avatar and Sonic stages at SEGA’s E3 2017 booth, I walked away with mixed impressions of its gameplay. However, one thing is for certain: Sonic Forces is going to be a dream game for fans of Sonic original content, characters, fanfics, stories, and the like.

I started with a largely 2D (classic style) stage at Green Hill for an Avatar character. I had a choice between two different abilities/weapons, but the full game will of course have many more options.

My character – who I didn’t have a name for – was taking orders from Knuckles, Amy, and Silver about creating a diversion in Green Hill while they infiltrated Chemical Plant. That meant just clearing the stage and messing with Eggman’s henchman, but it was fun to see classic Sonic stages tied into a story that includes more modern characters like Silver and Shadow. Unlike Sonic Generations, which kept the story simplified and focused on Sonic and Tails, Sonic Forces appears to be much more lore, story, and character heavy. I can already see the passionate Sonic fanfic community coming up with their own stories featuring their very own characters that fill in details of the Forces story. I believe that’s definitely SEGA’s intent, and reiterate that it’s genius that they’re doing so.

Gameplay wise, I wasn’t blown away with what I played. I was very limited in terms of customization options for the Avatar character, so it wouldn’t be fair to criticize that just yet, but putting that aside even, it felt a little clunky. When I jumped, it felt like the gravity was turned up a notch and I instantly came back down, which made finesse jumps difficult to land. It was almost as if the jump button was sticky and I couldn’t get a full jump off (it wasn’t sticky, for the record).

My Avatar was equipped with a flamethrower of sorts that let me blast through hordes of enemies and when charged, let me blast into the air for extra jump height. It was pretty neat and I’ll be looking forward to seeing how later and more difficult stages are balanced around this content.

On the other hand, the 3D modern Sonic style stage I played felt great. It plays like a smoother version of Sonic Generations which was already the finest version of modern Sonic gameplay to date. What I was most happy about is that the boost function doesn’t appear to be as abusable and never ending as it was in Generations and Unleashed. Players will need to use their boost more tactically instead of spamming it to win.

As a veteran of the modern Sonic games, I was able to blaze through Green Hill with relative ease and then ran into Shadow just as the demo ended. He appeared to be some kind of antagonist/rival figure in Forces, but I’m not sure yet. I’m looking forward to see how this finely tuned modern Sonic gameplay is leveraged in more difficult stages later in the game.

This is a very exciting time to be a fan of Sonic. Mania by all accounts so far looks incredible and I’m cautiously optimistic about Forces as well. I want to see more of the OC Avatar gameplay, but Sonic’s appears to be in great shape. It’s familiar enough that fans of modern Sonic will still enjoy it, and so far appears improved enough to perhaps bring some disillusioned fans back into the mix.