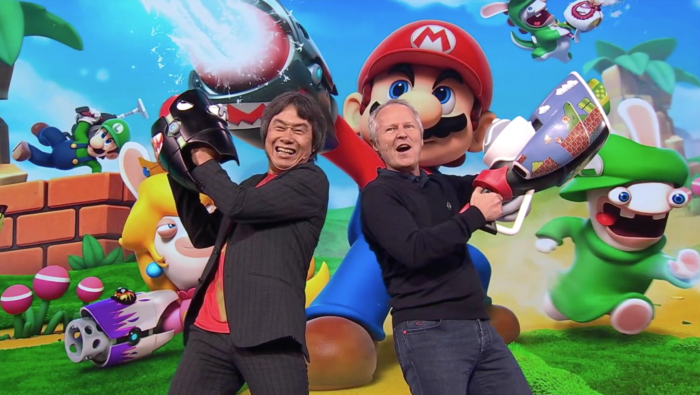 Nintendo is one of the longest existing developers and publishers in the entire gaming industry, and yet, traditionally they’ve been very protective of their properties. The company has only ever kept their game development in-house, with a few exceptions. Recently though, this direction seems to be shifting and it’s a good sign that Nintendo is adapting in a positive way.

The Nintendo Switch is gaining momentum as the months go on, and Nintendo will want to bring as many big releases to the system as possible. Right now they have one big first party title releasing every month in 2017, and the goal should be to do the same thing in 2018. Recently at E3 we finally got an announcement for Mario+Rabbids: Kingdom Battle, an incredibly fun and quirky looking title. The big thing to note here, however, is that Mario+Rabbids looks much different from anything Nintendo has ever done with their mascot.

Ubisoft has handled development for the title, allowing them to bring their own unique spin to the Mario series. At the same time this means that two different Mario games will be releasing in a matter of months, with Super Mario Odyssey hitting in October. While Nintendo usually has a very high bar for quality, their first party title can still only cover a certain amount of breadth and variety.

By opening up series to third party developers, they can bring fresh perspectives and development techniques onto their IPs. This is exemplified by the tactical gameplay of Mario+Rabbids, or the hack-and-slash style of Hyrule Warriors and Fire Emblem Warriors. All three of these games are good fits for Nintendo series, but ones that the company themselves have never had much experience with.

Opening up to third party developers becomes even more attractive when you realize the benefits to in-house Nintendo development. Essentially Nintendo can continue to develop the next big entry in a franchise, while a third party developer puts their spin on the series and sates the appetite of their fans. This is exactly what’s happening with Fire Emblem Warriors, while we wait for the next big Fire Emblem entry on Switch in 2018. It’s a really smart business move that Nintendo should continue to capitalize on more and more, not just with Switch but also with 3DS.

There are a ton of IPs under Nintendo’s ownership, many of which we haven’t seen for years. Why not open these up to third party developers, and see if there’s still a level of fan interest for them. It wouldn’t cost Nintendo much of anything, or if they wanted to co-develop on something it would significantly reduce costs. They could do something similar to NieR: Automata where Platinum covered the bulk of development while Square Enix helped and approved everything.

There are countless classic series Nintendo could take advantage of that would feel right at home on both Switch and 3DS. Give Shin’en Multimedia, developers of Fast Racing Neo, a shot at the classic F-Zero series. Bring Golden Sun back with a brand new entry developed by Level-5 or Square Enix, or maybe even a brand new Advance Wars developed by NIS, the creators of Disgaea. There are just so many iconic franchises Nintendo hasn’t used in quite a while that they could easily take advantage of by bringing third party companies into the fold.

All of this ties into one overarching important factor, it helps to facilitate third-party development on the Switch. Using Nintendo IPs for third party developers is a brilliant way to bring them on board with the increasingly popular Switch. It may not be quite the same as bringing a big multi-platform title over, but it gives Nintendo something its competitors absolutely do not have.

At the same time it makes third parties more familiar with the hardware, and could hopefully encourage them to support Nintendo in other ways. It’s could serve as a gateway into bringing more third party titles to the Switch and 3DS, as publishers like Ubisoft and Koei Tecmo form relationships, open new opportunities for development, and see the success of their titles like Hyrule Warriors.

Nintendo will always want to strive to hit that absurd bar of quality they’ve been able to maintain for decades, and they well should. But forming big partnerships with third parties is something that benefits not only them, but the industry as a whole. With the growing popularity and demand for the Switch, Nintendo will want as many big titles as possible for the Switch. While the big N can do plenty on their own, it’s high time they call in a little bit more help.