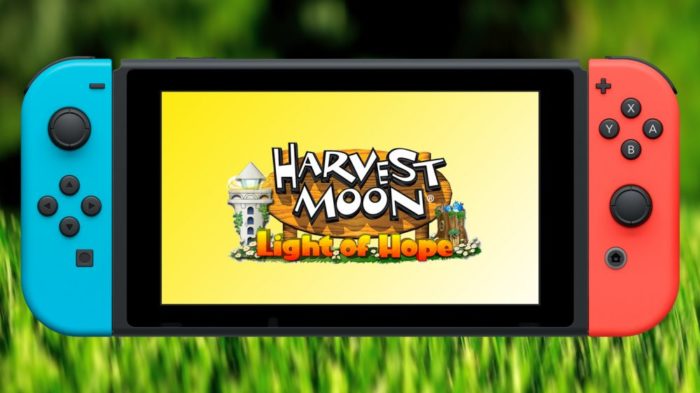 Everyone’s favorite farming simulator series Harvest Moon (sorry actual Farm Simulator) is coming to Nintendo Switch with the latest entry, Harvest Moon: Light of Hope. During E3 2017, I was able to play through a demo of the game on the Switch itself, which is looking pretty promising so far in terms of offering up a full-fledged Harvest Moon experience on the go.

The game itself ran smoothly, with several areas open to explore including your farm, the town, as well as a beach area compete with lighthouse from which the game gets its name. A mountain section dedicated to mining materials will be available upon release as well, but that wasn’t available in the demo at the time. The character art wasn’t the most impressive, especially when compared to past Harvest Moon titles, but the world itself looked good and was split into a grid-like format to help with choosing areas for farming. New “candy animals” will also be available this time around, with a chicken that can lay chocolate eggs, a brown cow making chocolate milk, and pink sheep with cotton candy wool.

The series is also making its debut on PC with Light of Hope, with a PS4 release also in the works. However, we feel you should be the most excited for its release on the Switch for a variety of reasons that became apparent while playing the demo on Nintendo’s newest console.

Probably the most obvious reason Harvest Moon would shine on the Switch is the ability to always have the chance to squeeze in a little time with your farm when you’re on the go. With PC and PS4, you’re grounded at home, but what’s to stop you from romancing a bachelorette while riding on the bus or shearing your sheep during your lunch break at work if you have the Nintendo Switch version in your carry-on?

Since the repetitive (but satisfying) actions of tending to your farm leads nicely into the current game types of RPG mobile games, it makes sense why people would want Harvest Moon on the go. Having a Harvest Moon on a the Switch as a portable console rather than another mobile title is even better as you’ll get the portability you’d have with your phone minus the worse battery life and smaller screen.

While in portable mode, you can use the touchscreen to do a few different things in Harvest Moon: Light of Hope, and so far the controls feel responsive and pretty second nature. If you tire of using the analog sticks to get around, you can place your finger anywhere on the screen and drag in the direction you want to go. So far this functions for right-handed players only, as when asked if this was available for lefties I was told the option wasn’t available at the moment but may be included in the future.

You can also touch both NPCs and your animals to interact with them, either to talk with townspeople or pet/collect resources from your critters. Finally, the most impressive touchscreen feature was the ability to hold and drag a section of crops to interact with them all at once. In the demo, I could select up to five squares because the watering can was fully maxed out on upgrades – usually you start with one square and upgrade from there. When I went up to the crops and highlighted five I was able to water them all simultaneouly without a single button click. I could definitely see this as my preferred option for farming as it made the process much more quick and satisfying since I’m already so used to the swipe action on mobile devices.

In Harvest Moon: Light of Hope, there is very minimal menu management and item swapping when it comes to competing tasks around your farm. Instead, when your character walks up to a square plot of land that you can interact with, pressing B will automatically do the task that is required of that square for farming. For example, interacting with tall grass cuts it, clicking a cleared plot of land turns it to useable soil, crops will be watered, trees will be cut down, etc.

These sorts of controls were first designed for Harvest Moon: Seeds of Memories since it also came out on iOS. Getting rid of tiny menu screens was a priority on mobile devices, and lends itself well to Switch’s portable mode. If a player was only using the TV mode, then menu screens wouldn’t be an issue, but it would be kind of confusing to use those menus for portable mode when switching between the two continuously. Intuitive farming controls fit perfectly for the launch of Switch, and likely were chosen with that in mind.

Harvest Moon: Light of Hope will release for PS4, PC, and Nintendo Switch at a currently unannounced date.