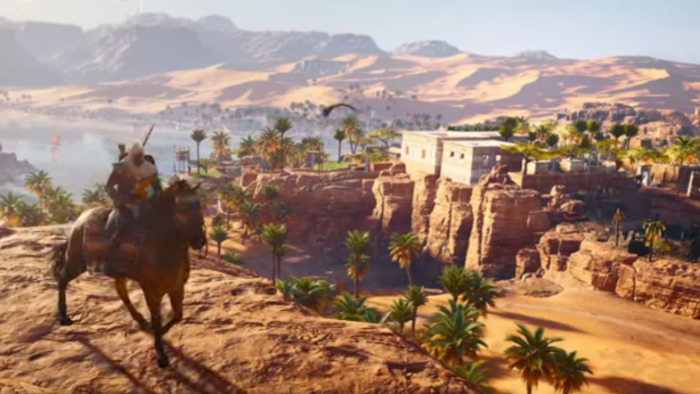 Assassin’s Creed, for all the elements it introduced to gaming, had begun to grow stale. Ubisoft annualized the series after the second entry, and from the that point on it was a coin-flip as to whether or not a new installment would be great or just okay at best. A lot of this had to do with the fact that outside of the time period each new game plopped players into, the core of the game remained relatively unchanged. There was a new gadget here, a quality of life change there (such as easier parkour or better dodging), but in the end you couldn’t escape the fact that you were really playing the same game. There was an undeniable flow in each of the games, a pattern that players fell into for better or for worse. And for some fans, it became tiresome.

When Ubisoft announced that they would be taking a hiatus from their flagship series, eschewing their annual approach for something that gives the dev team ample time to create something truly inspired. I must admit that I was a bit skeptical. It wasn’t that I didn’t believe they wouldn’t take a break. After all, it would look mighty odd if a company said “hey, we’re not releasing an entry this year” and then suddenly released that very same game. What had me worried was that I honestly didn’t think time would make much of a difference if in the end we received that same masked core. So, when I walked into my appointment to Assassin’s Creed Origins, I was jaded. I knew it would be good, but refused to believe it would be “different.” Yet here I sit, eating crow, as I look back on the time I spent with the game and look forward to when I can play it again.

Assassin’s Creed Origins feeling like a new game can really be attributed to one factor: it becoming an RPG. Syndicate and Unity started to scratch that itch with a bit more fervor, while previous games simply flirted with the same ideas. But for Assassin’s Creed Origins, the developers really let RPG elements take over gameplay.

When I first picked up the controller and started to move through the world as Bayek, there was that familiar feeling. Although I was a lithe fellow with no armor adorning my flesh, I felt powerful. I knew I was a dealer of death and that the only way I could save my people, save the cities I walked through was to be strong of mind and body. Immediately I felt fearless… but then I jumped into my first fight. Assassin’s Creed had always offered a bit of a challenge in the beginning. But once you realized you could instantly kill just about anything as long as you were patient, it faded away. This isn’t the case anymore, and it makes for a grueling combat system that’s fantastic to watch and rewarding when you emerge victorious.

The controls are changed up, giving players a light and a heavy attack that have been mapped to the right shoulder button and trigger. For your bow, you simply have to hold down the left trigger in order to aim. Dodging is still present, and very important, yet it won’t keep you safe at all times. Blocking is just as crucial, and when used properly, it can open up moments that turn the tide of a difficult encounter. The controls and combat feel more like an action RPG in the vein of The Witcher 3 than they do another Assassin’s Creed. Locking onto enemies causes you to strafe around them, making an enemy the focal point of all your movement. The combat is still swift, but all of those moments where you just became an instant killing machine aren’t simply handed out. You have to put in the work, you must strategize, and you must use the world around you.

It was all so dynamic, devoid of the stop and go nature fans of the series are familiar with. The fights didn’t feel like you entered an area and it suddenly became a mini arena. Control is never pulled from you, and you’re never dropped into an unfair situation. I jumped into a fight until it became too much for me to handle due to my level. I proceeded to easily disengage and dive into the water to seek refuge. Diving below the surface, I thought I was safe… until a crocodile appeared.

Normally, being able to have such freedom wouldn’t simply be considered an RPG element. Yet, in this case, I’m looking at it as one because it fits so well into everything that Ubisoft has done to let players truly become an assassin. It extends out of the simple “choose how you want to complete this mission” idea and evolves into “how do you want Bayek to be in your story?” Is he a man who takes to the waters to tangle with beasts? Is he a stealthy fighter or a brute?

The skill tree facilitates this by giving more control over the type of assassin Bayek turns out to be in Assassin’s Creed Origins. You can be an individual who excels at utilizing the world around him, or perhaps your bow is your best friend and you want to snipe or take out multiple targets from long range rapidly and with ease. Adjusting gear to fit your playstyle just adds another layer to it all as you craft an assassin unlike anything seen in the series before.

And the best part of my time with the game is that I never forgot I was playing Assassin’s Creed. Ubisoft managed to create something new for fans without forsaking the series we fell in love with in the first place. It’s not an easy task, and it’s something that’s stuck with me after playing. While I don’t know if this will be the great game we’ve been hoping for, I do know that Ubisoft isn’t taking this second chance with fans lightly.