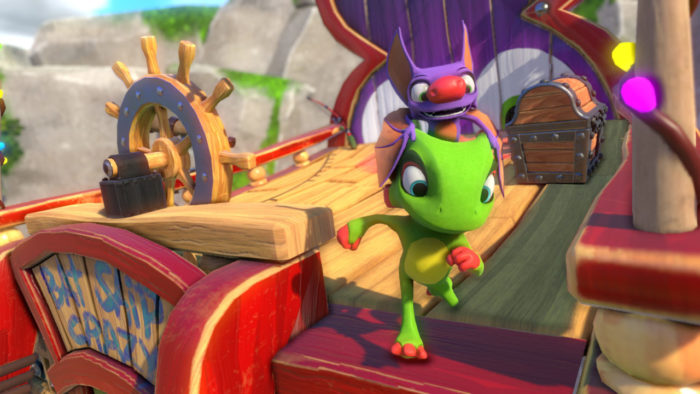 As our Managing Editor Ed McGlone explained in-depth in his E3 2016 preview, Yooka-Laylee does indeed do a great job delivering all those warm and fuzzy nostalgic feelings for anyone who played Banjo-Kazooie, Donkey Kong 64, Super Mario 64, and their ilk back in the late 1990s. You’d expect as much, as that’s exactly what the devs at Playtonic — some of whom worked on Banjo-Kazooie way back when as Rare employees — were going for here. But what really stands out isn’t the fact that you’re playing a colorful collect-a-thon platformer starring anthropomorphic characters. It’s all the little touches that show Playtonic’s extreme commitment to reliving the ’90s.

Yooka-Laylee’s PAX East demo opens right at the very beginning of the game, and you can immediately notice the liberal borrowing of 1990s ideas — even ones that initially seem like they were probably best off staying in that decade. The main antagonist Capital B has a lot to say, much of which is narcissistic or authoritarian. And every time he opens his mouth you’re treated to captions paired with grating Charlie Brown’s parents-esque sounds instead of actual voice work.

This is right out of the Banjo-Kazooie playbook, of course, and it’s immediately very annoying. With no way to skip these bits during cut-scenes — you can skip during conversations outside of cut-scenes — you’re forced to listen to this jerk of a bee’s assault on your eardrums. At first, you can’t wait for the cut-scenes to end so that you can be free of this cacophony. But, eventually, something amazing happens: it grows on you, and you look forward to Capital B’s air pollution voice.

Now, your mileage may vary on this a bit. If you never played Banjo-Kazooie, it’s doubtful you’ll ever come around to appreciating the nonsensical sounds that pass for voices in Yooka-Laylee. Those who remember Rare’s platformer from their childhood, however, are going to appreciate this approach almost as much as they’ll appreciate the gorgeous worlds full of platforming challenges and McGuffins to collect.

At PAX East, I also got to try out a new glacial level with one of those icy/crystal-y cave areas. Longtime Rare fans may smile in remembrance of the always curmudgeonly Cranky Kong complaining about such caves being requisite additions to this type of platformer way back during the Donkey Kong Country series. This appears to be the third area of the game, so Yooka and Laylee have a few more powers unlocked at this point than they do at the very outset. Yooka has his tail spin attack, Laylee has her sonar attack/puzzle-solving ability, and the duo have a team-up move that lets them roll up a ledge.

Publisher Team 17 limited my playtime in this level to just 15 minutes, but even during that brief visit I encountered a couple puzzles. One involved relying on Laylee’s sonar to light up different-colored crystals in a certain sequence, which in turn unlocked a Pagie, the game’s main collectible item. Elsewhere, a steep hill was too long to rely on Yooka-Laylee’s rolling move, which is on a cooldown meter. Instead, I found a beehive behind some ice and licked it with Yooka’s tongue. Now covered from head to toe in honey, I was able to stick to the ground for a moment and simply run up the incline. Back outside, I double-jumped across a series of moving platforms suspended in mid-air above what looked to be a freezing cold lake until my 15 minutes expired.

There are plenty of collectibles to find, big and colorful areas to explore, and platforming abilities to unlock. There seem to be pagie quests around every nearly every bend, so players aren’t likely to find themselves with a lack of things to do or stuff to collect once they embark on Playtonic’s adventure. Whether you’re racing a talking cloud or fighting off hordes of furry little baddies, you should be keep busy here as long as you don’t tire of hunting down Pagies. In other words, suffice to say that if you’ve been pining for a return to Nintendo 64-style platformers, Yooka-Laylee seems set to scratch that hard-to-reach itch between your shoulder blades.

The one area where the game seems a little too stuck in the past, however, is its camera. I routinely positioned the camera a bit to one side or the other only to have it whip back around to where it originally was the second I let go of the analog stick. This is not ideal, and it is guaranteed to remind you of all those hours you spent fighting camera systems a few decades ago.

If you can get past the camera frustrations, though, it seems like there’s going to be a lot for platformer fans to like in Yooka-Laylee.