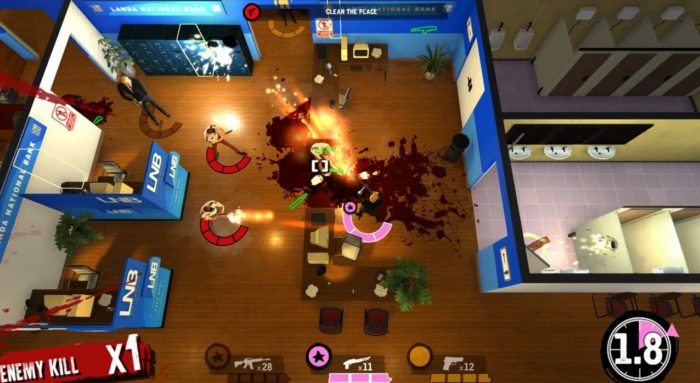 Quentin Tarantino’s Reservoir Dogs movie is a cult classic from 1992. Volatile Games’ 1996 video game adaptation is, by all accounts, not. In fact, the reviews were so bad that its Metacritic rating sits at 50. Ouch.

This probably shouldn’t be too surprising, however: video games based on movies have sucked more often than they have rocked, and Reservoir Dogs seems particularly ill-suited to game adaptation. Still, movie studio Lionsgate likely thought there was money to be made off players by leveraging a Tarantino brand in the wake of Kill Bill. Now, more than a decade after the original game failed, the studio is trying it again.

This time Lionsgate is working with Spanish indie studio Big Star Games, and the devs tell Twinfinite that they’re huge fans of Tarantino in general, and Reservoir Dogs in particular. Nevertheless, their game seems only tangentially related to the movie, but that might ultimately be less important than the fact that its gameplay gimmick is actually pretty cool.

Reservoir Dogs: Bloody Days is a single-player, top-down shooter in which you control two or three characters at once. How the heck does that work? Well, you guide one character to a certain point — usually around some corners and into some bloody firefights with police — before pressing the button for “Time Back,” which rewinds time and allows you to take control of another. At this point, the first character will run through his pre-ordained route while you do what you will with the second. Mastering this mechanic is crucial to success in Reservoir Dogs, as players will constantly be up against a police presence that’s too large and too heavily armed for a lone character to blast his way through without support.

That means players have to be smart in moving the second or third eponymous dogs into advantageous spots to take out an officer or three before they can get the drop on the first or second character. Thinking and acting strategically in these Time Back moments can result in the player’s secondary or tertiary dogs taking out the lawman in question before he’s able to deal the damage he inflicted during your first pre-rewind run.

If this sounds an awful lot like Capybara’s Super Time Force, that’s because it is. In fact, Big Star’s PR man even told me at one point that they’re calling it “single-player co-op,” the same term Capy used to describe its own rewindable shooter’s gimmick. Big Star CEO Liam Patton says the team threw Super Time Force into a cocktail mixer along with a few other games, and it’s hoping the result is a brand new blend.

The rewind functionality also draws a sort of inspiration from outside the game industry. In Quentin Tarantino movies, time is almost never a straight line. The stylish filmmaker is never afraid to mess with the flow of time, whether through flashbacks or by jumping around between characters and time periods, often without even overtly mentioning the time jump. With Patton and his team being self-declared mega-fans of Tarantino, I had to ask if this played into the development of Time Back.

“One million times yes,” says Patton. In pre-production me and Joan [Centellas] — being one of the top designers in the game — we had to put the flashbacks from Tarantino in the gameplay. It’s a tribute. The way the movie, for example, you see Mr. Orange being shot in the stomach one and a half hours into the movie, so definitely the answer, again, is one million times yes.”

“The flashbacks are part of the key elements from the movie,” agrees Centellas. “In the medium of games, as an interactive medium, we wanted to introduce that interactive element. Starting from that point, it all became just a cohesive unit.”

In the beginning, Time Back seems more like a crutch than a necessity, a way to almost cheat the game and save yourself if you play like an overly aggressive fool and get yourself into the shit. It only takes about 10 minutes of playtime, however, before you realize that Time Back is no crutch for players with poor planning skills: it’s a necessity for all players to survive. An early level is set on some docks in which players must kill cops and steal some money — these seem to be the core goals of every level, judging by what was shown at PAX — and just running through blasting fools with the first character is not a viable long-term strategy. Eventually, too many cops simply come in from too many directions for one person to mop them all up.

By using Time Back, it’s possible to take advantage of the information you’ve gleaned about where police will attack from and in what numbers. Armed with this pre-existing knowledge, you can have the second character flank around some storage containers and get the drop on the officers posing the biggest threat to the first player’s survival. What’s more, if the second character is able to eliminate some policemen who would have otherwise dealt damage to and/or been killed by the first character, that first character’s behavior now adapts to this new set of circumstances. According to Big Star, this is just the tip of the iceberg, and there is plenty of room for strategic thinkers to get creative.

“With the Time Back, you can multitask a lot,” explains Centellas. “You enter with one guy and kill another guy while with the other you can collect and steal all the stuff in the level. There are also more advanced tactics like when you’re robbing with the second or third guy you can fast forward, and you can rob real fast or shoot real fast using that fast forward. So the skill ceiling is super, super high. The more you play and the better you get in that time mentality, the better you execute and the less time it takes you.”

But where the gameplay shows the promise of depth, the game as a whole shows little more than a superficial connective tissue to Tarantino’s film. Mr. Blonde, Mr. Blue, Mr. Brown, Mr. Orange, Mr. Pink, and Mr. White are all in there, but none of them have the actors’ likenesses. Seeing Mr. Pink with blonde hair instead of Steve Buscemi’s pronounced features is more than a little odd. The game is also the prequel that no one asked for, with its 18 heists taking place before the big one that goes horribly awry in the movie. More concerning still is that Tarantino appears to have little creative input on the game’s development.

“We absolutely love Tarantino. We love his movies, and we love Reservoir Dogs, but it’s Lionsgate who we interact with,” says Patton.

Lionsgate acts as a middle man between Big Star and Tarantino, but it’s impossible to say how much Tarantino feedback is actually being passed along and being incorporated into the game. So is Big Star sweating the details and worrying about whether or not it’s hitting on a celebrated director’s creative vision from 25 years ago?

“We studied the movie a million times,” Patton continues. “We tried to put the personality in each of the six Dogs the players will be using to solve the heist. I would say yes, but I cannot answer in terms of Tarantino, but everything has been passed through Lionsgate. We have the end user in mind always. This, as a game, has to be fun, and the channel we bring — it needs to be fun for the gamers.

“And if you’ve seen the movie, hopefully you will not only love the game, but you will love the studio that made it. But it has to be fun whether you have or have not seen the movie.”

In limited spurts, at least, it is indeed fun. The question now is if Time Back is fun enough to sustain a whole game and convince players to overlook Bloody Days’ loosey-goosey connection to Reservoir Dogs. It’s a question that can’t be answered after 20 minutes with a convention demo — you’ll have to wait for time to move forward to the game’s release.