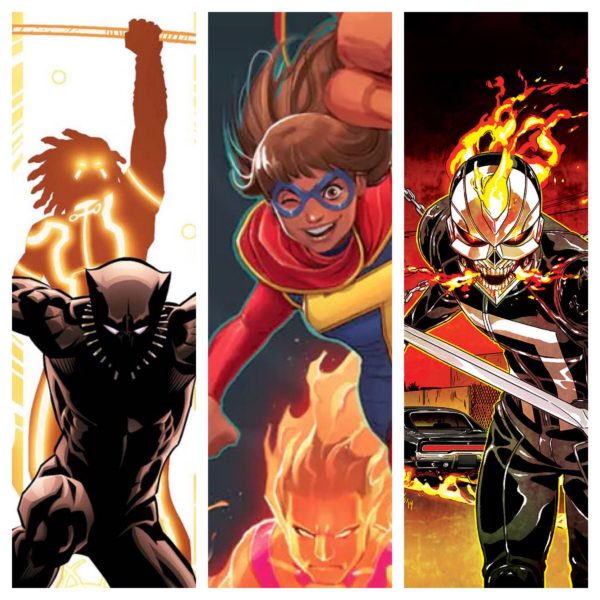 If you haven’t heard of the Secret Warriors, well then good, that’s the idea. Created by Nick Fury Sr., the team started out as superpowered agents who helped fight the Skrulls during that whole Secret Invasion business. The Warriors were players in other Marvel events at the time, including Dark Reign and Siege, before their series ended in 2011.

As part of the new Resurrxion run with the Inhumans and the X-Men, the Secret Warriors are returning this February. That team will consist of Quake (Daisy Johnson, the lead on Agents of SHIELD), Ms. Marvel, Inferno, Moon Girl and Devil Dinosaur, and Karnak. Inferno and Quake’s powers are exactly as their names imply; Moon Girl is the smartest person in the entire Marvel universe and also owns a giant dinosaur, Ms. Marvel can shapeshift, and Karnak can see the flaws in all things and exploit them, to rather gory results.

With five characters (and a dinosaur) to work with, this would best work as something of an open world game. If there were any developer that Square Enix should get for this, it should actually be two of them: Avalanche and Ninja Theory. While the former is pretty good at making games focused on chaos, as Just Cause has showed us, Avalanche isn’t exactly best remembered for its stories. Ninja Theory, on the other hand, excels on that front, and they know how to make some good combat as well. The two of them put together would combine fun, action-heavy gameplay with an entertaining narrative. A game that allows us to control a little girl riding a dinosaur and then switch to a guy that can explode tons of heads with a single sound couldn’t be bad, after all.

The fourth season of Marvel’s Agents of SHIELD brought in the Spirit of Vengeance, and one imagines that it won’t be too long before he gets a show of his own. Given that in the series, Robbie Reyes swore to settle the scores of previous Ghost Rider Johnny Blaze, a good game concept is ready to go — a cross-country road trip of vengeance.

Robbie has a souped up Charger, which more than makes it possible for him to travel from state to state and get some demonic payback. That’s not to say that Square Enix should recreate the entire United States, but Final Fantasy XV’s bro trip serves as a decent foundation. Square’s second business division went to great lengths to make that road trip worth it, and there’s no doubt that they could do it again. Robbie may lack the expansive arsenal that Noctis and crew wields against demons, but he does have daggers that can do some fiery damage when ignited. And of course, there’s always that wicked chain of his, used to collect souls.

It’s been a long time since Marvel has put out a good X-Men game. With hundreds of mutants to work with and tons of iconic locations, there’s plenty of potential for a great game. While the idea of playing as an established character in the vein of the Legends games has proved to be successful in the past, it may be best to put players in the shoes of a wholly new mutant. There’s more leg room in terms of character development, and it provides a new perspective on the mutant world. Think X-Men Destiny, but better. Way, way better.

If any developer was to work on this hypothetical game, it would be the studios behind the Kingdom Hearts franchise. Action-RPGs seem to be what the X-Men are sort of locked into when they’re not guest stars in fighting games, so they may as well be handled by a developer with a lot of experience in the genre. Give us our own custom mutant, plus two or three established characters to fight alongside us, and that’s a recipe for success. It doesn’t really matter if the AI X-Men can be rotated out with each mission, or if there’s a certain group our mutant is stuck with. As long as we get to save the world alongside the Children of the Atom, we’d definitely play it.

With his own movie due out from Marvel in a little over a year, the King of Wakanda is going to become more and more of a household name. He’s got enhanced speed, a kick ass suit, and other tricks up his sleeve that make him a force to be reckoned with. As the king of a technologically superior, super secretive nation, T’Challa has a lot of pressure riding on him at pretty much all times, and that means plenty of people who want him dead or access to the Vibranium that Wakanda holds.

Eidos Montreal comes to mind here. The Deus Ex developer knows their action games, and could easily grapple with the setting. Wakanda is an environment that doesn’t really have a definitive or popularized look, and one has to imagine that it looks pretty dang futuristic for a technologically superior nation. The tech Wakanda is said to have opens up plenty of avenues for T’Challa, from a cloaking suit to shooting out claws to knock out enemies.

Nearly every starting point for Black Panther has been about T’Challa contending with forces upset with him consorting with outsiders, and that’s where this game should start. As a king, eyes are on him always, whether he’s in his native country or out of it. Every word, every action, affects everything around him, a concept Eidos implements across their Deus Ex games. Not to say that they should literally just make Deus Ex with a Marvel skin, but they’ve got a good handle on how to approach a tech-surrounded character with a huge target on his back.

Kamala Khan is one of the biggest faces of Marvel comics right now, and with good reason. Her solo comic is awesome, and she’s been slowly integrated into outside media over the years (she’ll be a lead in the Avengers: Secret Wars cartoon later this year). Given her youth and the fact that she’s a teenage girl, it’s great material for a new game.

Dontnod worked with Square Enix before on their episodic time bending adventure Life is Strange, and they should be the ones being handed the reins of Ms. Marvel. High school is all about relationships, in a sense, and Kamala’s comic is partially about the ripples of her double life that affect those closest to her. Being a superhero isn’t easy, especially when you’ve also got homework due the next morning. Combined with the ability to create your combos for the combat moments, a la Remember Me, plus appearances from her favorite heroes, and Kamala’s game will be Crushing It.