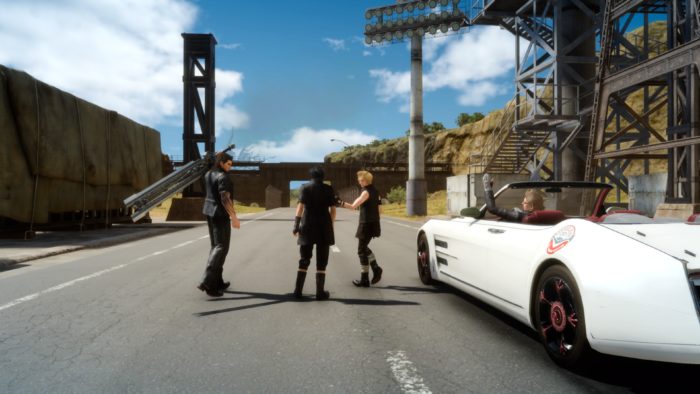 Final Fantasy XV is a brand new direction for the series, dropping players into an expansive open world to explore. Of course, in Final Fantasy tradition there’s still a central plot to follow, but by and large there’s a ton to do in the word of Eos outside of the story. This style feels like a marked change for the Final Fantasy series and one that, for the most part, completely pays off. Much of the success that comes from Final Fantasy XV’s open world is due to just how expansive and intriguing Square Enix has made it. There is, however, one aspect of the game that suffers a bit for this: the story.

Eos is an absolutely breathtaking world, and Square Enix has really put a ton of work and technology into building it. Everywhere you look you’re greeted with sweeping vistas, dense forests, and dank caves, all teaming with wildlife and enemies. First and foremost, Final Fantasy XV’s open world succeeds just because of how well it’s realized. Each area spans basically as far as you can see, and Noctis and crew can travel pretty much anywhere. Visually, each region feels distinctly different as well, from the arid desert of Leide to the wetlands of Duscae and the rocky shoreline of Cleigne.

Despite each area feeling so different, Final Fantasy XV does a great job seamlessly blending everything together. Some points of the world use rocky areas to seamlessly switch areas, while others may have the car (Regalia) passing through a tunnel. Oftentimes the switch to another region happens before you even realize it, and suddenly you’re looking at an entirely new landscape. Driving the Regalia is a mechanic that only reinforces the vast feeling of the world, even if it is a bit slow at times. You get a good look at the environment as you’re driving, and as mile after mile whizzes past, you really feel like the party has been traveling quite a distance.

Wildlife fills the entire world of Eos, going about their daily routines of grazing and wandering. Some beasts will openly attack the party, while others will leave them alone unless provoked. It all builds a convincing world that feels almost alive in a way.

The music of Final Fantasy XV also has subtle changes to reinforce this idea. Battle music is different between each region in the game, along with exploration themes. Music is quite brilliantly done in the game actually, even down to specific towns.

Take Lestallum for example, which has a peppy tune with a guitar and drums. When you first pull into town, the theme plays lightly, and as you make your way further into town the music adapts to where you are, injecting more of each instrument and changing up the tune a little bit. Finally when you hit the market, the guitar and drums are coming through loud and clear, and although it’s the same song it sounds very different. This also happens when you’re riding a Chocobo as the theme playing will seamlessly change when you enter the water, winding the music down and kicking it back up when you get on dry land.

Final Fantasy XV’s world is a marked difference from almost the entirety of the rest of the series, especially Final Fantasy XIII. This new title adopts more western ideals about what an open world should be. Previous games in the series were great at giving players the illusion of a vast and open world. Now of course there was plenty to do in previous games – hidden dungeons and side plots were aplenty – but they were still mostly linear experiences. No other Final Fantasy game has encouraged exploration of its world quite like Final Fantasy XV.

The game shuttles you to different areas as you undertake sidequests, and over half of the dungeons don’t get visited in the main story. Another important difference to point out is how soon XV gives you access to its world. Traditionally in Final Fantasy games you don’t really get to explore the world until you obtain an airship, or a boat at least. You may have some wiggle room to wander around before then, but the worlds of V, VI, VII, VIII, and IX all really open up only after you’ve obtained the airship. The exception to this rule would be Final Fantasy XII which gives players access to a big swathe of the world right off the bat, cordoning areas off with high level enemies.

Final Fantasy XV is different, however, as you obtain your means of travel almost immediately. After undertaking a few basic quests and hunts and learning the ropes, you’re given the Regalia. Immediately you have the expansive region of Leide to explore, and following the story for couple hours opens up the absolutely massive areas of Duscae and Cleigne. There are a couple other sections that open up as you progress, but compared to past titles you have an amazing amount of freedom. It’s a change that feels very very different for Final Fantasy, but one that seems like the natural advancement of the series’ world design.

Presentation aside, Final Fantasy XV’s world is also crammed full of things to do. Collectibles are everywhere in the wild ranging from treasures like new weapons and accessories, to cooking ingredients. Outposts and rest stops can be found every once in a while, and each is worth stopping at to take a look at the stores. You may find new weapons, cooking recipes, hunts, and music tracks to play in the car. This isn’t even to mention the overwhelming amount of side quests in the game.

The first half of Final Fantasy XV is absolutely filled with optional objectives to complete. Dino at Galdin Quay sends you on a quest to find precious gemstones so he can boost his business, while Cindy will have you out collecting upgrades for the Regalia, and a character named Vyv has you roving the land to capture photos of special places in Eos. There’s a decent variety to these quests, although a fair amount are basically fetch quests.

The best part of the side quests, though, is how they encourage even more exploration of the world. Oftentimes they’ll take you to locations off the beaten path of the main story, roaming the wilderness and finding enemies, or even uncovering brand new dungeons to explore. Final Fantasy XV has well over 100 side quests that can keep you distracted from the critical path for tens of hours easily. This does, however, lead to the biggest downside of the game’s open world, and that is how distracting it can be from the story.

The main narrative of Final Fantasy XV takes quite a while to pick up steam, and the first few chapters really encourage exploration. Because of this, even as you get further in the game, it’s easy to lose sight of what Noctis’ objective at any given time can be and remind yourself of where the story is at.

Your quest log quickly gets buried with side quests, not to mention the enormous list of hunts you can take at any diner and restaurant. Keep in mind that Noctis and crew are supposed to be taking vengeance against the Niflheim Empire and reclaiming the throne. It feels a bit odd when the group is out in the wild capturing frogs and hunting for precious stones, with such a dire quest waiting in the background.

Interestingly, Final Fantasy XV almost does a complete 180 with its story structure in the second half. From a certain point onward, things turn almost completely linear, piling on far more cutscenes and story content. While the drama does ramp up by the end, drawing you into the story far more than before, there’s still pieces that are hard to grasp. Final Fantasy XV focuses on Noctis and his friends till the very end, ignoring most of what else is happening in the world.

This does feel intentional, but also requires you to put some of the pieces together in terms of the story’s timeline. Because of this, however, the first half of the game has played its part. The open world helped build the relationship between the four main party members, making players care for them. On top of this you’ve had the chance to explore the world of Eos, meet its people, and have some understanding of what you’re fighting to save. There’s a myriad of plot holes, but Final Fantasy XV does a great job investing you in its main party and their struggle.

In my experience as well, undertaking side quest after side quest resulted in my party being far too overleveled for the main story. Almost every side quest rewards you with a hefty amount of experience, and it adds up quick especially as you’re out slaying monsters and the like. This can result in main story missions that don’t feel quite as intimidating as they’re supposed to. This is up until the final two chapters, which have a surprising difficulty curve.

Despite these drawbacks, the world of Eos feels like somewhere just begging to be explored, and there’s always things to do. The scope of Final Fantasy XV’s world is truly impressive, and as you drive, make camp, and explore, you feel like you’ve really been on a journey with Noctis and his friends.

The open world is easily Final Fantasy XV’s strongest aspect, and it feels like an important step for the series to finally take. It’ll be interesting to see what happens with Final Fantasy from here, and how this memorable journey is followed up on.