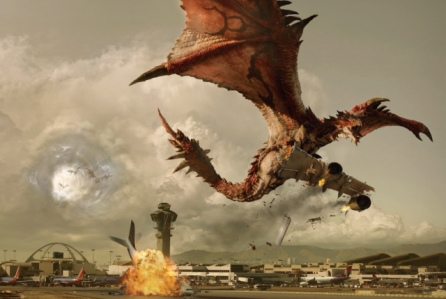 Paul Anderson, the director of the Resident Evil movies, will soon be working on a Monster Hunter movie adaptation next, it would seem. According to a report from Deadline, the script for the “first film” is done, and we even get a look at some monster visual renders that will be in the movie.

‘Anderson has written the first film’s script, and they come armed with still and VFX visual renderings of the creatures (including the above image of a dragon wreaking havoc on LAX) and a detailed game plan that will include a partnership with Dennis Berardi. He’s the co-founder and president of Toronto-based VFX house Mr. X that helped enable Anderson and Bolt to bring in the Resident Evil series for reasonable net budget in the $50-plus million range for each of the final 3D pictures. Monster Hunter will cost a similar amount.’

In other happier Resident Evil news, the seventh main game will be hitting the PS4, Xbox One, and PC on January 24, 2017.