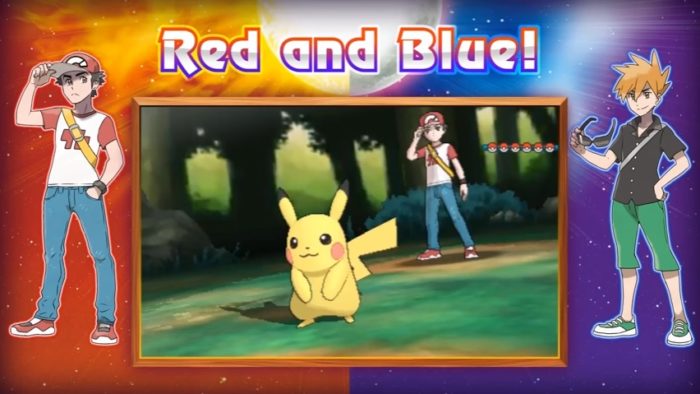 Warning: This article contains minor spoilers for the story of Pokemon Sun and Moon.

Before Pokemon Sun and Moon’s release we saw a trailer that showed off our favorite protagonists from the very first Pokemon game, Red and Blue all grown up. There wasn’t much context as to what exactly they were doing in the Alola region, however. Clearly, Sun and Moon both take place years after the events of the first Pokemon games, as both characters are now adults.

It’s not until late in the game, after you’ve become the Alolan Pokemon League Champion, that you’ll encounter Red and Blue. Sun and Moon have a location called the Battle Tree, and this functions like other battle locations in past Pokemon games. For example, Johto, Hoenn and Sinnoh had the Battle Tower, while Unova had the Battle Subway.

The Battle Tree lies on the Eastern half of Poni Island, and you’ll need to go through Poni Gauntlet. There was a blockade with a man stopping your access to the tree before, who wouldn’t let you pass until you became Champion. In the tower, you’ll fight powerful trainers from both Alola and other regions of the world. The first time you make your way to the tower, you’ll be stopped by none other than Red and Blue. If you beat them in a Pokemon battle, they’ll share that they were asked to come to Alola to be the new bosses of the Battle Tree.

Now your goal is to fight through the sprawling floors of the tree, and face the two legendary trainers again in the ultimate showdown. Along the way, you’ll even meet some other famous trainers, like Cynthia from Diamond, Pearl, and Platinum.

The Battle Tree has single, double, and multi battles to beat and will prove one of the most challenging tasks on your Pokemon adventure. There are also some neat prizes, including equippable items and even Mega Evolution stones to win, by trading in the BP you earn.

Remember, of course, the ultimate trainers wait at the top. Clearly, after all these years, Red and Blue’s skills haven’t waned one bit, and they’re still the final challenge for you to overcome in Pokemon Sun and Moon.

Comments
Continue Reading
Related Topics:alola, blue, feature, Pokemon, Red, sun and moon, what are, why are