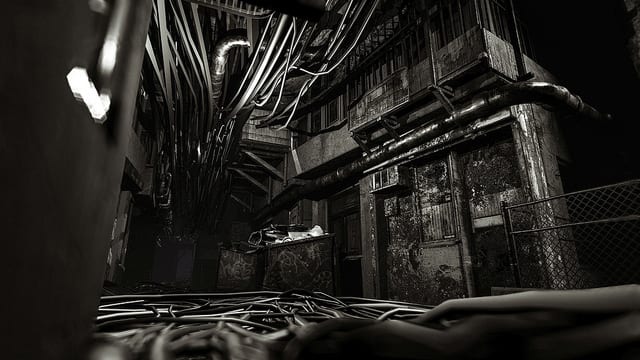 Until Dawn: Rush of Blood

An on-rails shooter spin-off of 2015’s survival horror interactive movie experience, Until Dawn: Rush of Blood brings many of the creepy beasts from the main game and pits them against you as you ride a number of fairground rides. You know those haunted house rides where you get taken around and frightened constantly in a little mine cart? Well it’s that but you’re armed with guns and you can die this time.

Thanks to the immersive nature of VR, something which wouldn’t be all that scary when playing on a normal TV becomes a lot more terrifying. Especially when you hear a clown’s laugh as it blindsides you and attacks you with an axe. Nope nope nope!

Though Kitchen is only a demo, it’s most certainly one of the more terrifying things you can try out with your PSVR. Acting as a taster for what to expect in the upcoming Resident Evil 7, which will also be playable on PSVR, the game has you sitting in a kitchen as all kinds of creepy things happen around you.

It only lasts a couple of minutes and ultimately, you’re there for the ride and nothing more. But if you’re looking for something to show off just how terrifying VR can be, or maybe you just want to get an idea of the tone for the upcoming Resident Evil game, then Kitchen is well worth the download. It’s free too, so don’t worry about it eating into your games budget.

If you’re looking for something that’ll mess with your head as well as scare the crap out of you at the same time then Here They Lie is definitely something you’re going to want to look into. Throwing you into a surreal world full of weird creatures and a seemingly distorted reality, players will have to venture further into the narrative and further into the horrors that it conceals.

Though you won’t be shooting anything as you explore this creepy world, there are still plenty of jump scares to be had. It’s a walking simulator with a strong focus on narrative, though despite its currently middling reviews, there’s enjoyment to be found here for avid horror fans. Just know what you’re getting yourself into.

More Games on the Horizon

Though there are limited pickings at the moment for horror fans on PSVR, that doesn’t mean it’s going to stay that way for long. In fact, within the coming months we’ll be able to get our hands on another three horror titles that will all work with VR. First, you’ve got The Brookhaven Experiment which will send wave after wave of enemies after the players in creepy environments until they can’t take it anymore. Next up you’ve got the aforementioned Resident Evil 7: Biohazard which will see players investigating the unsettling abandoned farmhouse we’ve already seen in the opening hour demo.

Finally, horror fans will also get a slightly different experience in the form of Dying: Reborn. Rather than having players blast the faces off of ghouls or zombies, Dying is instead an escape room puzzle game with a spooky twist. You’ll have to examine, collect and use items to solve each room’s unique puzzle. And who said horror had to be all about jump scares?