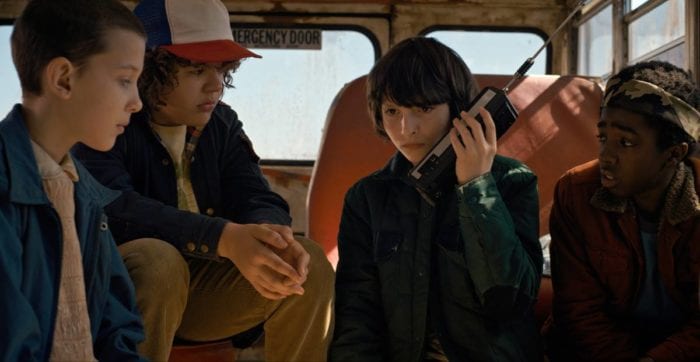 The new hit Netflix TV series, Stranger Things, has been receiving popularity with viewers along with critical acclaim mainly due to its interesting characters and fresh plot lines. The show introduces a talented cast along with very distinct locations and environments. The combinations of these aspects make Stranger Things a prime candidate for a video game. However, the uniqueness of the characters and contrasting environments might be difficult to portray through cohesive gameplay.

Stranger Things has a talented and varied ensemble cast, which works well in the TV medium. In video games, there is typically only one protagonist that the player takes control of. Since Strager Things focuses on multiple characters and plot points at the same time, it would be hard to transition in video game format since mechanics and abilities would most likely be tied to a specific character or location. In games such as GTA V where there are multiple playable characters, the characters have very similar combat systems where the characters in a Strangers Things game would not. Gameplay tied to the character Eleven would be ability-based and characters like Chief Hopper have more realistic combat. The characters all have the same goal, but their methods to reach that goal varies differently, which may result in disjointed gameplay that would be difficult to market.

Games that have multiple playable characters with distinct settings and combat such as Telltale: Game of Thrones or Heavy Rain, has gameplay take a backseat in order to focus more on story. A Stranger Things video game that takes this route might not work, since a story-based medium for Stranger Things already exists in TV.

Ways It Could Work

Stranger Things has a rich narrative and interesting lore that can be explored in a variety of different ways and through different video game genres.

A story-based game Stranger Things game would be a great option if it focused on new characters and storylines like what Telltale does with The Walking Dead and Game of Thrones. Those games tend to focus on new stories and characters that take place in the already established universe. This way, gameplay does not need to be spectacular if it brings a never before seen story that adds to the lore. A Stranger Things game that goes in that direction could go well since the universe is big enough to find new plot points to add to it.

If the game wanted to keep the same story and already established characters, it could do so in an action/adventure style game. Fans of the series know the story very well. To prevent players feeling underwhelmed by the familiar story, the game would need to compensate by offering immersive gameplay to add another layer to the Stranger Things experience. Giving players to opportunity to take Eleven through her daring escape through Hawkings Lab or Chief Hopper and Joyce’s journey through the Upside Down would make them feel like a part of the story. Immersing players with gameplay will put them in the Stranger Things world and would make for a great game.

What makes Stranger Things a prime candidate for a video game, is that there are a lot of different directions for the game to go. A development team has the option to do a stick to the lore or get a little creative with the boundaries since much of Stranger Things’ lore still remains a mystery.

Transitioning a source material to a new medium is always daunting. A Stranger Things video game can be great, but a lot depends on the intention of the game. If the game is just a rehash of old storylines and generic gameplay made solely to market the show, then the result will most likely be lackluster.

Stranger Things has a rich universe that should be explored through different mediums as long as the team is passionate about the story and respectful to the source material. Whichever way the game is made, either with the existing cast of characters or with a new group of people, it would make for an interesting experience. Hopefully, we will get a Stranger Things video game someday. But until then, we will have to stick to playing D&D with our missing friends.