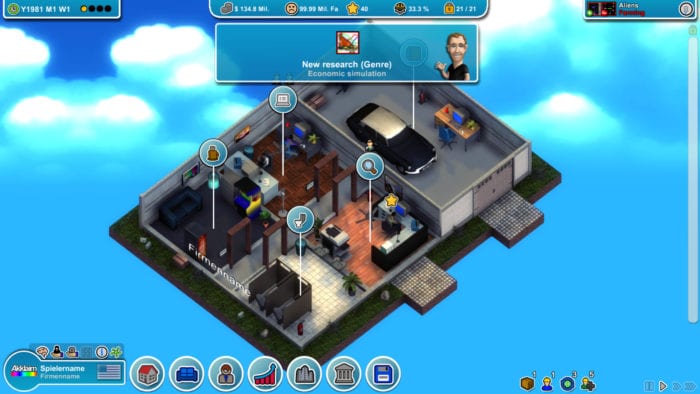 After trying to get my small startup company to produce a successful game I wagered all of my money on a new RPG title called “The Potato Experience 3: We’ll Get it Right Eventually.” After time spent researching markets and listening to fan mail my perfectly crafted game was ready for market. It got a 55% from the reviewers, lost me 50k, gained the title of Worst Game of the Year, and actually took my fan count into the negatives.

This is Mad Games Tycoon, a wild, surprisingly complex, and fun Sims-esque game that has you build a video game empire. Set over a period of different times (ranging from the 1980s to the present), you will be tasked with not only founding a gaming company but managing every single aspect of it and the employees you hire. You’ll start in a small garage-sized office and eventually expand out into a massive office complex with several dozen rooms and a plethora of different workers. As your business grows you will either create your own games or publish others in an attempt to become the most dominate gaming company that ever existed.

While this sounds fairly straightforward the journey can be anything but if you make the wrong choices. Mad Games Tycoon is a difficult game that is full of nuance, graphs, market shares, and game design terms that you’ll need to memorize in order to succeed. This lends Mad Games Tycoon some serious longevity as the challenge of trying to master game creation is an incredibly deep and rewarding experience.

Not only can you name your titles, but you’ll be given a mountain of options to tweak such as what game engine will it run on, how long is the game, what will the graphics look like, and what’s the general theme or tone you’re aiming for. However, just slapping a game together will not be enough, as you’ll need to not only factor in the current demographic but what your devoted fans might think. This layer of difficulty helps set Mad Games Tycoon apart from other job simulators as it forces you to really consider the possibilities of choosing a Skill based game over say an RPG.

The problem, however, lies in Mad Games Tycoon’s inability to actually explain any of this, making your starting time with the title much more frustrating. Yes, the game offers a brief tutorial to get you going, but it never actually explains many of the icons or concepts you will need to succeed. I’m not asking the game to hold your hand, but a deeper tutorial system that explained the ins and outs of all the general areas would have been welcomed.

This wouldn’t be as much of a problem if Mad Games Tycoon was a little more forgiving, however, it’s fully possible to go bankrupt from one bad release. There is a brutal difficulty spike early on that can make or break most playthroughs since your company’s success really hinges on the fanbase you can acquire early on. Though the ability to outsource work or take contract jobs alleviates a little bit of the stress.

In terms of presentation, Mad Games Tycoon is very hit or miss on certain aspects. While the colorful designs and fun icons for games look great, the actual character animations are awful. Unlike the Sims, your little workers won’t do much but just sit around typing wildly at the computer. If you want to move them you’ll actually drag their bodies through the level and set them at a chair. This can disconnect you from the world and doesn’t make your gaming company feel like a real place you can visit.

However, some of the best moments come from reading the fake reviews or fan letters you can receive. Reviews are particularly funny as many of the complaints are quite blunt and can easily crush any hopeful game developers soul. These reviews don’t just exist to add a bit of flavor to Mad Games Tycoon but serve as a great way to improve upon the next entries in your game library. It may take a few tries, but it’s fully possible to make a game that is beloved by fans and critic alike, though this is incredibly difficult to pull off.

Yet, most of your time will be spent hitting the fast forward button as your little workers mumble incoherently to themselves as they work. Sound design for the game is pretty mediocre sadly, especially since the music incessantly loops the same 30-second song over and over. It’s better if you just mute the in-game audio and just play your own music over the background.

In the end, Mad Games Tycoon is an entertaining, challenging game that will put your resource management skills to the test. Even with a lack of any real tutorial and some bad animations this was still a game worth picking up. While the extreme difficulty may turn some players away, it never truly felt like it was unfair or game breaker. Now if you excuse me I need to begin work on my next title “The Potato Experience 4: We’re Trying, I Swear.”