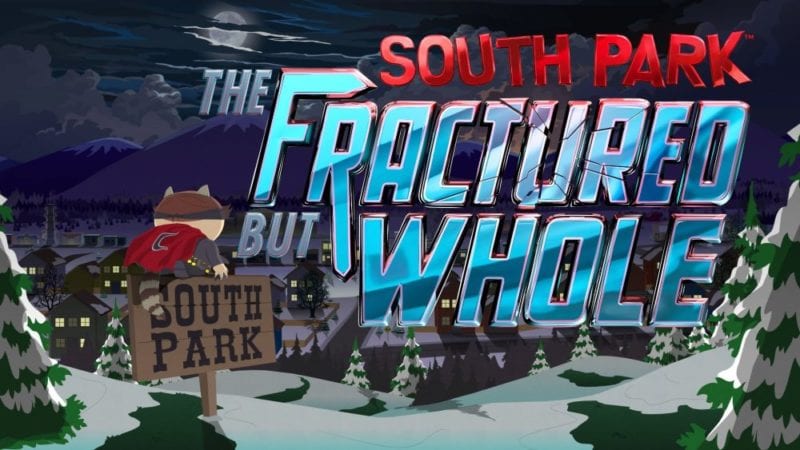 South Park: The Stick of Truth was the surprise hit that nobody expected it to be. Essentially an extended episode of the TV show, the game packed in a ton of humor into an interesting and enjoyable storyline as we saw ourselves take the role of the New Kid become the king of South Park. In the Fractured But Whole (FBW), the South Park kids are back and playing a new game, and it’s looking just as hilarious and enjoyable as its predecessor.

The developers have focused on three things to bring FBW to life: interactive humor, exploration, and combat. The first is their intention to make the game feel just like an episode of the show, with the same crude humor filling most lines of the dialog. Exploration is another of their focuses, as FBW’s town is set to be even more open to exploration than Stick of Truth. Finally, following the fan feedback from the previous game, FBW features a revamped combat system that allows the player to move around a large combat grid, position their characters, and use the different character classes to tactically defeat your enemies.

The preview started off with the New Kid finding himself in Cartman’s house. I was told by his mom that the rest of the kids are down in the basement, which is barred by a keypad with a combination of words that can make for some severely inappropriate phrases. This was the first moment that I realized the game was going to be riddled with the classic humor associated with the franchise.

Exploring upstairs was just the same as it was in Stick of Truth. Locations looked just as they did in the show and checking out different pieces of furniture in each room uncovered all manner of strange items. One thing that was made clear here was that your farts are as strong as they were in the first game. You can now use your power whenever you want to break open items to gather collectibles. Combining different items together can make new ones that can be used in battle to buff you or hinder your opponents.

In order to get the very best items, you’ll need to explore every inch of South Park. Later on in the demo, we were out on the streets of South Park with a chest out of reach on top of a building. Standing in the close vicinity, a prompt appeared on-screen to call upon a fellow superhero. For this particular collectible, Fartcour was necessary- a combination of using Kyle’s kite as the sail and your farts as the wind in said sail. With each press of a button, New Kid farted, boosting the duo higher and higher into the air. Different pairings of characters will grant the player different abilities that will give them access to other difficult to reach places.

Upon finding the password “F**k You Mom” in Cartman’s very oddly-illustrated diary, the New Kid headed back downstairs to meet up with the kids. We walked in on a meeting between Cartman’s superhero team: Coon & Friends. The rival faction had a Netflix connection in town and they were planning out how to reach them before the rival superheroes did. Both groups have movie and TV show ideas that they’re intent on bringing to fruition, at the expense of the other, leading to a divide forming between the kids.

After finally worming our way into the game, Cartman insisted that we set up our ‘Coonstagram’ page to pick our character’s class. Players will start with Brutalist, Blaster, and Speedster, with each one offering their own unique abilities which affect the attacks they have in combat. This was where the most notable changes could be seen between Stick of Truth and FBW. Combat has seen a complete overhaul with characters being placed on a grid and the introduction of Ultimate Abilities.

Moving around the grid adds another layer of tactics to proceedings, with your ‘tank’ characters probably best to sit near the front and the more fragile toward the back to keep them largely out of harm’s way. Of course, the kids had to make sure to get out of actual harm’s way when cars made their way down the road mid-battle, making the kids dash onto the pavement and shouting abuse at the driver. It’s difficult to get a good grasp on this system, however, without getting hands-on with the game. While we can’t say for sure how well it will work at this point, it is clear that the combat will require good knowledge of your characters, their abilities, and their weaknesses.

Ultimate Abilities, on the other hand, are unique to each character and showcase their individual prowess on the battlefield. Shown off in the demo was Kyle’s called Kite from Above. This saw Kyle propelled high up into the stratosphere, before blasting down several different colored rays upon his enemies, dealing a ton of damage in the process. Ultimate Abilities can only be activated when the meter is filled in the upper-left corner of the screen, which is done by dealing and taking damage as the battle goes on. Knowing when to use an Ultimate Ability and who to use your meter with is an important decision and one that players are likely going to have to be tactical with its consumption.

South Park: The Fractured But Whole is the fart joke-filled sequel to Stick of Truth that fans have been waiting for. While its biggest improvement (the combat system) needs to be tried and tested before I can approve it as a positive inclusion, its premise is certainly intriguing and, if done right, will make battles more interesting than the basic turn-based combat of its predecessor.