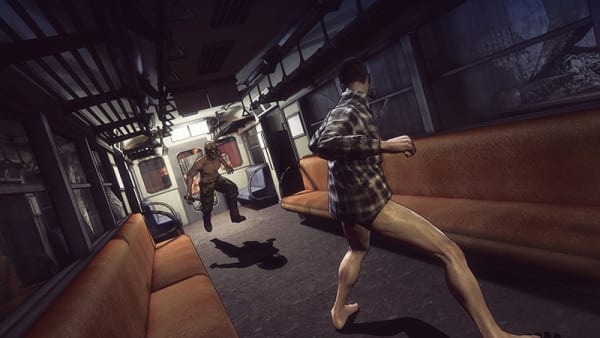 Suda51 has never made a dull game, and Let It Die continues that entertaining legacy. I like describing Let It Die as Suda51’s take on a Souls-like game. You can equip weapons in both hands, you can lock on to enemies, roll to dodge attacks, and you also have to manage your stamina to make sure you’re not overexerting yourself.

The playable demo started with me taking control of an almost completely naked male protagonist, so naturally my first order of business was to find some clothing. Let It Die’s world is full of little suitcases that you can open up to get some extra rewards. After my character was partially clothed, it was time to hunt down some enemies. Let It Die allows you to crouch by pressing in the left analog stick when standing still, and this means that you can actually sneak up on enemies and attack them from behind. The target lock works reliably well, though the camera could still use a bit of work in making sure your targeted enemy is always in your view.

I was only allowed to play through one area in the demo, but this singular area was full of branching paths leading to optional items and enemies too. Let It Die started to feel a little reminiscent of Bloodborne when I found a large, two-handed axe and discovered the good old ‘spin to win’ button combination. The axe was an extremely slow weapon, but it proved capable of taking down a really powerful and optional foe down in just two strikes. I’m calling it now: that axe might need a little bit of a nerf. I also encountered a tough optional foe that was modeled based on the player character, and fighting him felt a lot like facing another player, kind of like fighting NPCs in the Souls games.

Throughout the course of the demo, I picked up a good variety of weapons: an axe, a baseball bat, an electric fist, a crossbow, a magnum, and a katana. You can press left and right on the D-pad to change the weapons in your two hands, and this allows for a lot of interesting styles of gameplay. You’ll also have to watch your weapon durability and make sure your stuff doesn’t break. The stamina system in the game is pretty neat as well; instead of staring at a stamina bar, a heart icon appears on your character’s chest, and the color indicates how low your stamina is, with red being the danger zone.

The demo ended when I got to the end of an area and came head to head with a pretty gruesome looking boss with a backpack of corpses. His attacks consisted of emitting a sonar wave to locate your position, stomping the ground, and throwing dead bodies at you. He wasn’t particularly tough once you figured out his patterns, but the design of the boss fit with the overall grotesque aesthetic of the game.

It’s also worth mentioning that there are rats and frogs in the game that serve as consumables. Your character can crouch to pick them up and you can eat the rats for health, and throw the frogs at enemies to release a poison cloud. Because, well, because it’s Suda51, that’s why. There were also blueprints for weapons that I found along the way, though a Grasshopper Manufacture representative told me that those weren’t usable in the demo, but it does suggest that there will be a crafting component in the final game. You’ll also gain experience points and levels as you run your way through enemies, though it’s not clear yet whether you’ll be able to unlock skills like in other action RPGs.

Let It Die is looking really promising right now. It’s got a very dark, gritty kind of humor to it, but it’s also quite the departure from the hack and slash gameplay in Killer Is Dead and Lollopop Chainsaw you might’ve been expecting. Even so, it’s a good change of pace, and it’s essentially Suda’s own take on the Souls genre.