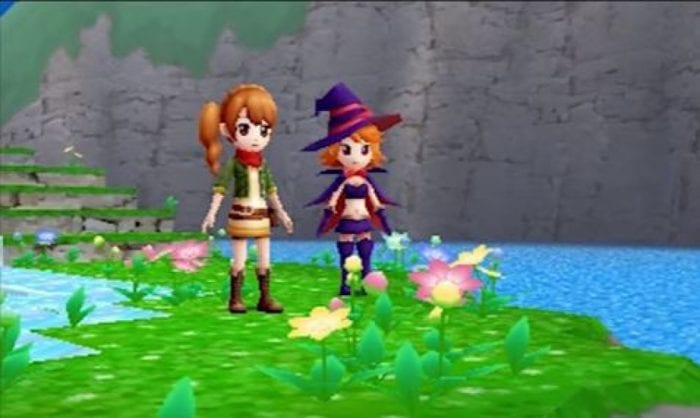 Harvest Moon was the first series to do what games like Story of Seasons and Stardew Valley have since gone and built upon. While these two different franchises have added in more and more content into the base farming-sim gameplay that Harvest Moon founded, Skytree Village looks set to take the series back to its roots and right the wrongs of its most recent predecessor.

One thing that Natsume wanted to make crystal clear was that they had listened to fan feedback from The Lost Valley. The most recent game that released on Nintendo’s 3DS portable didn’t feature a town, something which every game in the series has featured since its birth into North America in 1997. This omission from The Lost Valley left many players upset, as did the lackluster romance mechanic, but both of these have been rightfully corrected in Skytree Village.

Skytree Village is in peril. The Harvest Goddess is gone and the town has been left in severe need of water. Therefore, it’s up to you and your set of tools to build a thriving farm and restore water to the land. The Harvest Goddess is a tried and tested formula used in the series to give the player a reason to be farming in the first place. Of course, what could be even more encouraging for returning water back to the town than a little bit of material incentive?

My hands-on time with Skytree Village had me wandering around the world, planting crops, tending to animals, and chatting with locals in the town. Yes, the town area housing the locals has returned and provides you with the real reason for returning water to the town. As you complete tasks to restore the water source, you’ll attract people to inhabit the village. Attracting these to your town will then bring with them the ability to unlock better and unique items. These upgraded tools will make your farming chores much easier. Tilling the land becomes a lot less time-consuming when you can till nine squares at a time with a level 3 hoe rather than the standard one square that you start out being able to. It’s a neat mechanic to incentivize the player to progress but also make tilling the huge world a lot less monotonous and frustrating.

The land that you have at your disposal in Skytree Village is huge. Your initial farming area is quite small and compact, but venture out of here and you’ll find a huge area of open land at your disposal to do as you see fit. Natsume also mentioned you’re completely free to play however you want. You can play at your own pace, and get as involved as you like in the game’s mechanics. Didn’t like the terrain modification introduced in The Lost Valley? Then it’s not necessary for you to do and it’s incredibly easy to just ignore it. If you’d like to focus on purely tending to livestock on your farm then you don’t have to worry about growing crops. You’re entirely free to do as you see fit with your time in Skytree Village, which includes the pursuit of the romance options in the game, too.

There are three romance options for each gender this time around. Rather than go for five like there were in The Lost Valley, Natsume listened to fan feedback and made three deep and interesting options instead. The developer was aware that this life-sim aspect of the game was incredibly important to some players and so it was important that they got this right. They also mentioned that the mechanic had been deepened, but didn’t go into the minutiae of this.

However amidst all of these improvements that have been made to the core of the Harvest Moon gameplay, Skytree Village seems happy to remain solely a farming sim. While its competitors like Stardew Valley and Story of Seasons are running with monster hunting and dungeon crawling, Skytree Village completely ignores these, giving you the same gameplay experiences that the series has mastered over its nearly 20-year history.

Skytree Village is the product of listening to fan feedback. The village has made a return, players can do whatever they want, whenever they want, and the romance system has been refined and strengthened. All of these changes have been made, all the while maintaining the familiar Harvest Moon gameplay. For fans looking for a true portable Harvest Moon experience on their 3DS, this may well be the answer to your prayers, if, of course, you can ignore the lack of distractions from the farming that its competitors offer.