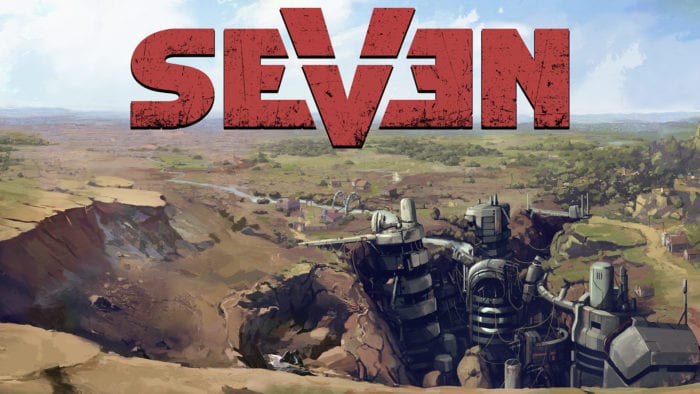 As a big fan of top down, isometric action-RPG games like Baldur’s Gate: Dark Alliance, I was really looking forward to checking out Seven: The Days Long Gone. Doubly so because Seven is being developed Fool’s Theory, which is made up of some of the people behind The Witcher games, including Wild Hunt. I played a very early build of the game at PAX East, so as to be expected there were some technical issues, but none could cloud what is already shaping up to be a unique and impressive game.

Although I was pumped for a new Dark Alliance-like game, the similarities kind of end with them just being action-RPGs that feature quests, gear management, and other traditional elements of the genre. Which is fine, because Seven is instead its own game that, as crazy as it sounds, plays like an action-RPG version of Assassin’s Creed.

One feature that a member of the Seven development team wanted to highlight in Seven’s gameplay is its sense of verticality. Unlike other similar games where gameplay is mostly grounded on one plane, players in Seven can parkour up houses, hop across platforms, and perch themselves high above the action. Seven’s hero, a lone traveling thief, can vault up ledges and leap across gaps just as skillfully as Nathan Drake or Ezio. And, even though Seven is definitely not an action-adventure game, there are times where platforming comes into play, too. You can miss jumps and fall to your death. At least in the demo, though, death wasn’t a big deal as I was able to respawn right back where I was if I made a poor jump.

You’ll want to use the terrain, both high and low, to avoid the heavy hand of the law. You’re a thief after all, so you have the freedom to get “creative” about how you choose to complete tasks. For example, one quest required me to pay up some coin for information. Sure I could do another side quest and get paid, or… I could get what I need right away by stealing from people around the city. There’s more than one way to skin a cat in Seven, and according to the developers, you’ll often have multiple options and moral dilemmas to consider while completing quests.

Seven also features stealth gameplay and has a law and order system in place should you get caught. You can crouch to remain stealthy, and by pressing a button, you can see the line of sight of people around you that may see your crime. If a guard learns of what you did, you can return what you stole, escape with your loot, or fight your way out. Pick carefully, as the guards in Seven ain’t nothing to mess with.

The world of Seven is an oppressive post-apocalyptic society that has been set back seemingly hundreds of years, but has slowly started to discover the advanced technology of the old world. So while you’ll initially be equipped with classic weapons like swords and daggers, you’ll also come across advanced weaponry such as energy weapons. In the demo, the oppressive guards utilize these weapons to keep control of the populace. I was eventually able to pick off a few guards, though, and steal their guns. It was really strange but fun to suddenly switch from a sword to an energy gun in this medieval looking setting. For kicks, I just started laying into people around town and felt unstoppable.

One thing that was a bit concerning was the combat, which felt very bland in this particular demo. There wasn’t really anything to do other than mash the attack button while engaging enemies. However, the developer noted that the combat is still a work a progress. Again, what was shown at PAX East was a very early build of the game so there’s plenty of time to make the combat more engaging. So while it wasn’t a highlight, it’s still too early to really worry about it.

Seven: The Days Long Gone has a lot going for it. It has a development team with a solid pedigree; and even though it’s still a ways away from being complete, Fool’s Theory has already created a game that feels different from anything I’ve ever played before. If it can continue leverage and feature its unique qualities while making sure the foundation for good ARPGs- the story and content- is solid, then Fool’s Theory might have a hit in their hands.