Note: This contains spoilers for all three Dragon Age games, along with the Trespasser DLC for Inquisition.

Yes, he looks like a teenage boy trying to be emo at the Renaissance Fair. But Cole’s more than his appearance would suggest, and part of that is because of how he looks. Most people aren’t sure if he’s an actual human, or a demon taking a human’s appearance. Hell, even he’s not sure of just what he is, all he knows is that he wants to help people during times of extreme pain or grief, then vanish like a thief in the night.

His story is revealed in the novel Asunder, where we learn that Cole, or at least his body, was a Mage locked up by the Templars and forgotten for years. His cries of pain attracted a spirit that bonded with him and later posed as him after he died, and since then, he’s been going around as a spirit of kindness.

The tragedy of Cole’s life is balanced by the kindness he brings to others, which is what makes him fascinating. He’s easily one of, if not the only character in Bioware’s universe who doesn’t do things for some personal gain, he just does it because he wants to help. Whether you help him become human or confront the last man responsible for his death, Cole is definitely worth remembering.

Ah, Morrigan, the Witch of the Wilds. The Companions in this universe may not all have had the best lives before they crossed paths with you, but hers takes the cake. Being the daughter of a powerful witch can’t be easy, and neither is spending your whole life in isolation with your mom, who plans on possessing her body so she can stay alive just a bit longer. And you thought your family problems were bad.

Whether you meet her in Origins and help her kill her mom Flemeth, or for the first time in Inquisition, she certainly leaves an impression. Her wit is razor sharp, and her skills with magic make her a force to be reckoned with. As with all Companions in Dragon Age, pairing her with different characters yields some funny and informative moments, such as putting her with Alistair. It’s disappointing that she doesn’t join the Inquisition as a playable member, but the story still gives her plenty do do, especially if you’ve been having questions about that kid of hers. If you’re looking for a sassy mage with one hell of a power set, you certainly can’t go wrong with Morrigan.

Good looking rogues with a sharp tongue isn’t anything new for Bioware, and with Dragon Age 2, players got a pair of them. In addition to the expert storyteller Varric, there’s also a pirate captain who’s “equally skilled with dagger and insult, and it’s hard to know which cuts deeper.” We speak, of course, of the enchanting Isabella.

She shows up as a teacher for a specialization in Origins, but she makes a full-fledged appearance in the second game. Despite her status as a pirate captain, she’s not too fond of shipping people off to slavery, which eventually puts her in the same path as Hawke and company. Her lifestyle makes some of the best dialogue moments when wandering around with her as part of the party, especially with the more innocent of the lot like Merrill or Bethany. Sure, sometimes her pirate ways have a bad habit of blowing up in her face, and eventually yours, but can you hate her as she’s slowly corrupting your sister or flirting you up?

Yeah, okay, Solas is a giant douche. He completely screws you at the end of the game, and it’s hard not to go “OH WHAT THE HELL?!” at the combined dickery of the base game and the Tresspasser DLC. All that time spent with fighting, talking, and possibly romancing this guy, and what do you have to show for it? No arm and he wants to restore the elves, the rest of Thedas be damned. Swell guy, that Solas.

And yet, even taking that into consideration, he’s still a pretty cool dude. As cryptic as he is, it just makes you want to talk to him more to figure out what his deal is. Among the other mages in Inquisition, and the series in general, his power set is fun to fool around with, and he may be the most powerful yet. His banter with the other characters is fun, and his personal quest is pretty intriguing. If you can get past what a complete 180 he does at the end of the game, you’ll find yourself drawn in by his mystery. Along with that shiny dome of his.

As Dragon Age II opens, Cassandra is not really anyone’s friend. Sure, she says she wants to find Hawke so they can help save the world, but the stress of the situation is clearly getting to her, and she’s a bit of a wet blanket during some of Varric’s crazier stories. Even through the first few hours of Inquisition, she’s less of a badass warrior than her title Right Hand of the Divine suggests and more of a normal human completely weighed down by the stress of a very mentally and emotionally taxing job.

Underneath her cold demeanor is a woman with a lot of passion about changing the way things are done in the world. The Chantry soldier wears her heart on her sleeve, and some of the best moments in Inquisition are when she banters with Varric. Cassandra’s also something of a dork, easily flustered and perhaps more than a little too into Varric’s smut novels, which is both embarrassing and genuinely hilarious. It’s good to know that a powerful warrior has a soft side… even if that soft side involves punching trees when she’s got hay fever.

There doesn’t really need to be a thesis statement for why Dorian is one of the best characters in this series, right? If you’ve played Dragon Age Inquisition, you already know that; if you haven’t, then go play it right now and experience his greatness. He’s witty at all the right times, he’s devilishly good looking, he’s got a sweet mustache, one of the most powerful mages around. Is there anything more that needs to be said?

All mages in this series have something of a target on their back, and Dorian doubly so. His troubled childhood from transferring from Circle to Circle due to fights, shaming his prestigious family. Him being gay already caused trouble among them, but they certainly didn’t help matters by locking him away in a prisoner for months. It’d be safe to say that his hatred of Tevinter and his family is what drives him to join the Inquisition out of spite, even if he wants to change the world’s perception of them by helping save the world.

His personal quest is what elevates him to the greats. Rather than go for a quest of action and murder, it’s just a simple tale of trying to reunite a broken family. At least, until you learn that his father tried the magical equivalent of gay conversion therapy on him. Dorian’s got plenty of reasons to be pissed about that, and it’s definitely an emotional moment for people of any sexual orientation. Dorian’s an outcast among his own people, but among the crew of the Inquisition, you couldn’t help him feel any more at home.

Qunari aren’t just tall dudes with big horns. They’re generally portrayed as stoic and humorless, making them a pain to be around. (Here’s a middle finger to you, Arishok.) If that weren’t enough, they also tried to take over Kirkwall while searching for a stolen artifact and are just ready to wage a war if it means “enlightening” other races to the teachings of the Qun.

Iron Bull is none of those things. He still follows the Qun, but he’s also a funny guy who’s open about literally everything, including spying on you. That he’s so open about it is a welcome change of pace, and his ability to lack any cares makes for some hilarious material, such as his thirst for Dorian with absolutely zero chill. Respect for being so brazen about it.

He’s also a pretty powerful warrior to have at your side in the thick of battle, which is always important. Sure, he may sometimes challenge the dragon flying around that you’re trying to run away from. But he’s got the weapons and strength to back up his words, and once the dust has settled, he’ll take you all out for drinks. How could you hate such a dashing, charming Qunari like he?

The elf companions in this world generally fall on the side of a rogue or mage, as we’ve seen with the likes of Solas, Merill, and Sera. So to see an elf take up the role of warrior is certainly surprising, even if that is an option you can go for when creating your character. But that surprise will be replaced instantly with disgust and sympathy once you learn Fenris’ sad backstory. A slave turned mercenary, he’s got no memory of who he used to be due to multiple experiments involving the lyrium markings on his body. (Side note: don’t touch him.)

Even though he’s not always the nicest guy around, especially with mages, Fenris is still a pretty cool dude. His tragedy has made him a survivor, and there’s something satisfying in hearing him talk about previous missions where he killed slavers looking for new meat. This is a guy who’s willing to take pain for others, which is why he took the markings to spare his family from being slaves. This is a man who takes no BS and can dish out what he can take, but also not afraid to let his soft side come out. Just don’t be a slaver, and you’ll see the nice side. 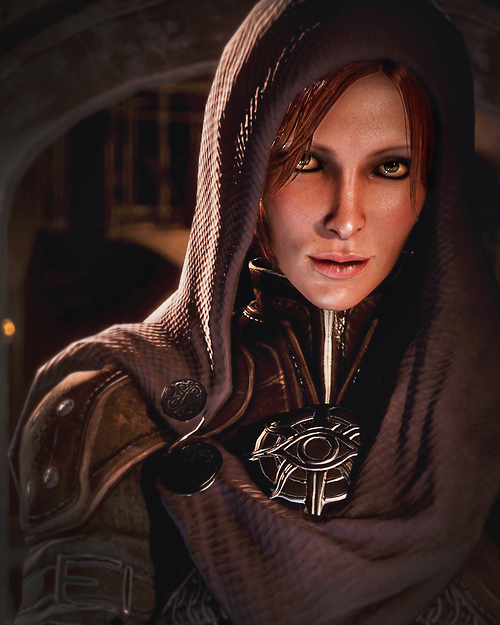 The bard may have shifted her focus over to Spymaster (and possibly Divine), but her awesomeness is a consistent thing throughout the previous games. In Origins, she’s a force to be reckoned with, with her bow and arrow, as well as an interesting presence to have around. Is she true in saying the Maker chose her, or is she just kind of not well? It’s possibly a bit of both, but you need all the help you can get, so why turn her down?

Like all characters in this universe, Leliana’s past has a way of catching up to her at the worst times. It still has a hold on her, as is clear with Marjolaine, but she still strives to move past her former lover. She may talk and act like the woman who taught her everything, but she’s her own person, and a great character to have at your side.

When all is said and done and the trio of games has been finished, there aren’t many other characters that connect with players the same way that Varric does.

Certainly helping his likability is how we get to learn about him over the decade long story of Dragon Age II, as both a playable character and unreliable narrator. Even early on, it’s easy to see that he and Hawke have a special bond that, whether you read it as lovers or good friends, it’s one that’s grown solidly over time. Like Hawke, the Warden, or the Inquisitor, Varric has an uncanny ability to draw the oddest of characters into his wheel. It certainly causes him trouble from time to time, as it did with Bianca, but the dwarf is charming enough that even his setbacks usually end up working out for him. Usually. If there’s no Shepard without Vakarian, then there’s definitely no Hawke or Inquisitor without Tethras.