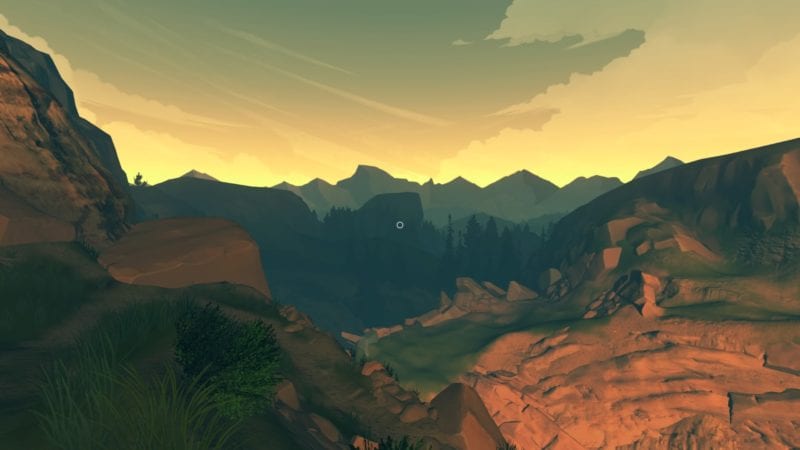 Delilah’s voice prods at you in a scene that sums up the entire experience of Campo Santo’s inaugural release, Firewatch.

Firewatch is more than a walking simulator. It’s more than a beautiful forest of isolation. It is more than a tale of a man trying to run. Firewatch is an introspection, a call to the player to look deep inside themselves and call into question all of the thoughts that race through the head of a man whose life is spiraling as a result of besetting tragedy.

Henry and Julia met in college. The question of how is crafted in the opening sequence along with the tale of two decades of a relationship, but one thing is inevitable, Julia’s health will decline. Early onset dementia sets in and rips away Julia’s memory as well as the beautiful and messy relationship she and Henry had created over 20 years. Now, with little to no recollection of the man she loved in a life before, Henry is left trying to deal with the effects of seeing his wife die a thousand deaths. In the midst of his struggle, Henry turns to the bottle for an evening and winds up getting arrested for a DUI. Julia’s family in Australia learns of this incident and comes to America to take Julia away from her irresponsible husband.

Perhaps what makes Firewatch’s story so compelling is its ability to launch those of us with less life experience into situations we would never want to imagine ourselves in. The one you love changing right before your eyes. The messiness of commitment alongside the reality that he will probably never see his wife again. The knowledge that even if he were to breathe the same air as her, she probably would never have any idea who he is.

There is really no choice in the matter, and the game provided little space to consider whether or not running was the best option given the circumstances. With a new job comes new duties, and those duties quickly call on Henry’s first day. Within moments of wandering through the beautifully designed forest, the player completely forgets the reason for being there in the first place. Life has a funny way of distracting us from the big picture through menial tasks, and that seemed to be exactly what Henry was after.

Then there’s Delilah, who is just as, if not more, broken as Henry. The supervisor, who’s only connection with Henry is through her walkie talkie, gravitates quickly to the story’s antihero and bypasses over all social graces to get to the center of who he is and why he has run away.

Firewatch takes on the role of navigating the minutiae of an emotional affair. Isolated in the woods, running from personal tragedy, and left to the company of only one other person, Henry’s temptation to enter into something deeper with his handsomely-voiced supervisor is placed front and center.

In a world where 1 in 5 divorces site Facebook and other social media as a reason for the breakdown in a relationship, Firewatch is a poignant glimpse into our new found culture of digital anonymity. Rather than displaying this conflict via a device’s screen, it explores it through the faceless communication of Henry’s walkie-talkie. There is Henry, with a hopeless marriage on the other side of the world and the perfect opportunity to fall in love with no threat of being caught asking the question of the player, “How far should this go?”

The player spends the game getting to know Delilah, digging to get to the bottom of a conspiracy that threatens both Henry and his supervisor, and engaging in witty banter back and forth. Near the middle of the game, as a fire burns, Delilah confides in Henry that she has enjoyed his company throughout the summer, and that she wishes she were at Henry’s tower to watch the forest burn with him. Delilah and Henry seemed to have run away from their problems only to find each other.

Disappointing is a word that has popped up over and over again when describing the final act of Firewatch. After arriving at the extraction and searching Delilah’s Thorofare Lookout, Henry quickly realizes that this woman he had spent 78 days in isolation with is nowhere to be found. Gone in the blink of an eye.

Maybe, just maybe, disappointment was what Campo Santo was going for. The isolation of the woods along with the knowledge that never again would Julia lovingly lay her eyes on Henry led many to believe that maybe these two flawed characters had found what they were looking for in one another.

Henry discovers that he was alone the entire time. Sure, there may have been an actual Delilah stowed away in Thorofare Lookout keeping him company for the two and a half months he tried and failed to keep the forest from burning, but she wasn’t real. At least THEY weren’t real.

The entire story was one that leads the player to believe that there is something much deeper going on. Even the mystery serves to remind the player that sometimes what’s on the surface is really all that is there. The majority of the game is spent trying to get to the bottom of a conspiracy that didn’t actually exist. The tapped radio, the detailed reports, and the fenced off area weren’t some big government scheme, but rather a scared man, who lost his boy in an accident and did just as Henry did, ran.

In the same way, Henry and Delilah were not two broken lovers on a crash course put in motion by fate. They were simply victims of their own circumstances, placed in one another’s path to avoid slipping into the insanity of isolation, a fact that Delilah knew long before Henry ever did.

What was real were all of the issues Henry ran from, the wisdom behind Delilah’s parting advice that maybe what Henry needed to do was take care of his dying wife rather than to run, and the fire that consumed the safe haven of a place and relationship that Henry thought he could find rest in.

Firewatch reminds the player that solace isn’t found in our failed attempts to run away from the difficult curveballs life throws us. Nor is it found in the quick-witted, faceless banter of a relationship that never could have been. Often times it is found in a harsh reminder that the thing that is calling for our attention is the very thing our attention should be focused on.

Delilah never got the answer to her question. She was left only to her imaginative drawing contingent on the honesty that Henry afforded her when describing himself. That scene metaphorically sums up the entire experience of Firewatch, leaving the player to ultimately craft the answer to the question, “What do you look like?”