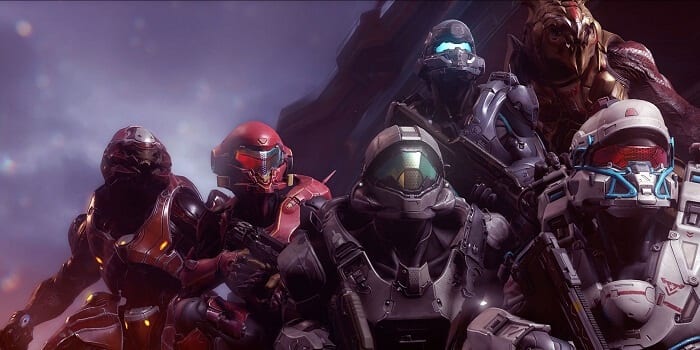 It’s currently Twinfinite’s Game of the Year week! All week long, our Editors and Writers will be nominating games from this year that stood out in 2015. Today, Associate Editor Justin Carter tells us why Halo 5: Guardians is worthy of being Twinfinite’s 2015 Game of the Year.

The Halo franchise has been around for nearly 15 years at this point. A decade and a half of gunning down aliens, punching them in the face, and jacking their vehicles. Bungie handed the reigns over to 343 while they decided to do Destiny, and the response to a studio shift didn’t entirely go over well when Halo 4 was released. It’s easy to say that Halo 4 was more or less a transitional game for 343, one where they had to prove that they at least knew what they were doing with the franchise.

Each of the Halo games have had a unique challenge with their release: “Can Microsoft make it in the games industry?”, “Can there be a stellar online console experience?”, “Will Bungie be able to stick the landing?”, and so on and so forth. Since Bungie left the series with Reach, the underlying challenge has been “Is Microsoft capable enough to continue the franchise and keep up the series’ hot streak?”.

The challenge for Halo 5: Guardians has been twofold; asking players to give 343 another shot after the Master Chief Collection managed to ruin the fun of having all the core Halo games on the Xbox One, and to accept that the hero of the series may possibly be on the wrong side of things now that Cortana’s out of his head. For months, the marketing has been building up this whole “Master Chief’s gone rogue and you have to hunt him down!” narrative to get people hyped up about going toe to toe with the Spartan.

Real talk, it’s a bit annoying that 343 was pulling the whole “two sides to every story, #HunttheTruth” BS with the marketing when the story is incredibly straightforward and offers no ambiguity as to what’s really going on. If the story was done more as a framed narrative or the marketing was more about “hey, is this person really dead?”, it would’ve been worth all the speculating and weekly audio logs. As it is, it just feels like the writers and the marketing team weren’t really in communication with each other in any capacity.

Which isn’t to say that Halo 5’s narrative is bad; even though it’s practically unkind to anyone who hasn’t read the books or comics with Master Chief’s fellow Spartans (which we’ve helped rectify!), it’s still pretty fun and entertaining. While Blue Team gets the short shrift in character development — it’s crazy how they just show up and the game expects you to roll with this while offering nothing for you to really learn about them — traveling the galaxy with Osiris is fun, and it’s nice to actually feel like part of a Spartan team. There are plenty of moments in the cutscenes where you feel like you’re a superhero (sadly, none of them playable), and the sight of watching four supersoldiers drop into battle with the Arbiter and a pack of Elites doesn’t really lose its cool factor.

If nothing else, the story didn’t feel like it was for two completely different games like the early Halos, and I’m pretty excited by what the ending means for the series. I actually ended up liking the dynamic between Osiris, Buck and Vale in particular. He’s always got something funny to say, and I found her knowledge of the Elite language and their lifestyle interesting.

I’ve been playing Halo for years, and Halo 5 has probably the most consistently entertaining campaign the series has had, and even the missions where your goal is just to walk around are nice breathers from all the action. After Halo 4 was essentially “plug the USB into the glowing slot”, the campaign here is thankfully more varied. It takes a few pages from the Call of Duty handbook by basically throwing you into a new encounter every couple of minutes, and it works. Having four Spartans has increased the enemy amount to a crazy degree, but it’s manageable and challenging. The game definitely shines when you’ve got an extra friend or two on hand to sub for the AI, because those dudes are stupid as hell, and on higher difficulties, it makes you wonder why they’re even there with how effective they are outside of healing you.

What also helps mix things up are the new mechanics 343’s added that Halo has stubbornly (and annoyingly) ignored up until now. Giving players the ability to aim down the sights is a grateful addition for getting headshots, but the game balances it out by removing it whenever you get hit. Being able to clamber, sprint, and use thruster packs gives the levels some verticality the other games sort of lacked, and thank god that the thrusters let you make a speedy dodge from an incoming grenade or sword swipe. While in single player, they’re more of something you can take or leave, they’re practically essential in multiplayer.

I cannot. Stop. Playing. Halo 5’s multiplayer. It’s a crazy amount of fun, and probably the most multiplayer I’ve spent the year playing. The success comes in blending the old series’ formula with modern gaming convention, mainly in eSports. It’s clearly been made with an eSports focus in mind, from the way each match opens to show off the power weapons and pickups to the currency system. The latter was something a lot of people were worried about when it was first announced, but I haven’t even thought about touching it, and the boost cards help you get the credits you want at a faster rate that microtransactions are the last thing on my mind. While I’m not entirely a fan of how random everything and how much stuff there is to get on the cosmetics side for armor, I’ve gotta hand it to 343 for making the process of getting new armor so addicting.

Having the power weapons be always marked, complete with countdown timers and audio cues to remind you of their arrival, gives better situational awareness for all players. Nearly every match I’ve played has had standoffs around the power weapons for both winning and losing sides. Even then, there are still plenty of areas far away from them where everyone’s just shooting each other to pieces. This feels like the multiplayer that Halo 4 was trying to go for, but wasn’t entirely sure it wanted to be, and even while I’ve got my gripes (really wish the assassination process was speedier, or at least required you to hold the melee button instead of just press it), this is the most fun with the series I’ve ever had, at least as far as the standard Arena modes go. Warzone, the new mode where two dozen players duke it out on an open battlefield, didn’t grab me at first. But after a few games with some friends, it’s grown on me. It’s not something that demands to be played every single night, but it’s definitely a great substitute for Halo 4’s Spartan Ops.

I don’t know if Halo 5 really needed to do all that it does; the campaign doesn’t give half of its supporting cast much to work with, and the big cinematic moments definitely could’ve used some interactivity to avoid feeling like you’re watching Age of Ultron through the Oculus Rift. But the multiplayer feels like it’s been perfected and has a great selection of maps to choose from, it’s a gorgeous looking and sounding game, and the story has enough confidence in itself to just end the way it does without making any excuses. 343 may not have made the best of first impressions with Master Chief Collection or Halo 4, but Guardians is a massive step in the right direction, and I dug the hell outta this game.

Now if you’ll excuse me, I need to throw a sticky grenade in someone’s face.