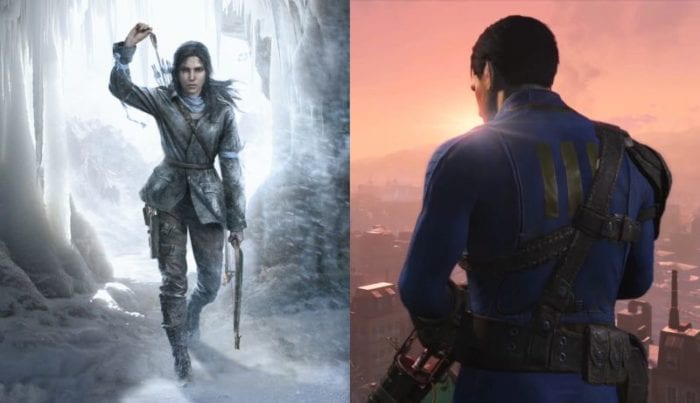 It seems as if 2015 is set to be the year of major face-offs between highly anticipated titles. After seeing Metal Gear Solid V: The Phantom Pain overshadow the impressive Mad Max, and Halo 5: Guardians compete with Assassin’s Creed Syndicate, it seems as if Lara Croft and the Vault Dweller has caught the same bug. Nov. 10 will see the release of both the Xbox One exclusive Rise of the Tomb Raider and the multiplatform Fallout 4. These are two titles that have been garnering quite a bit of attention. Probably more than almost every other game this year (with the exception of maybe MGS V).

On one side, you have Rise of the Tomb Raider. After years of struggling to find the perfect way of telling a new story with everyone’s other favorite treasure hunter, Crystal Dynamics finally hit a homerun with the 2013 reboot, Tomb Raider. Lara was back in all her glory with a retelling of her harrowing origins and enough survival mechanics to make some recent horror games hang their heads in shame. After its highly successful Definitive Edition, the team over at the Xbox division of Microsoft knew it was something special. Fast forward through a couple of major deals and you have a highly impressive exclusive title in the Xbox One’s holiday lineup.

Building on the well-received mechanics from the reboot, Rise of the Tomb Raider adds more strategic capabilities for those seeking stealth, violence, or a mix of the two. The game will also feature some more expansive tombs for players to dive into as they search for valuable treasures and uncover more ancient secrets. The mean green machine is putting a lot behind this one and it’s no surprise why. The Xbox One needs to put its best foot forward.

The only problem is that it’s competing with Fallout 4. Fallout 4 isn’t just any big, AAA game. It’s been over seven years that fans have been waiting for a new installment. With fan-loved franchises, the hype only grows stronger every year that passes with no release. Whereas the desires of Call of Duty and Assassin’s Creed fans are met each year, Bethesda fans wait long stretches of times before being thrust into worlds with new things to do.

Fallout 4 takes place in an alternate timeline Boston that has seen the horrors of nuclear war. Its open world is there for the taking as players search for something they’ve lost and help those who have managed to survive. New to the game is the ability to build and manage settlements. We don’t mean build in the sense of “I clicked here and there’s a town now.” You’ll be able to build houses, set up defenses, manage resources such as food, water, and power, and deal with the problems of the people under you.

Then there’s the whole weapon upgrading mechanic which Fallout 4 and Rise of the Tomb Raider happen to share. Fallout 4 has a lot of options when it comes to taking a weapon and making it your own. Pretty much every part of every gun or melee weapon can be swapped out for something else that alters how it works.

Both of these are large franchises that have been on the scene for an extensive period of time, although Fallout in the way it is now began with the third game. Regardless, they both have large, well-established fanbases. So, for the most part, they have that in the bag, but the face-off comes down to those who are new and those who like both.

The holiday season for games is when developers put out their very best in order to rake in some of that sweet cash that people are just throwing at their screens in preparation for Christmas and other gift buying celebrations. That also tends to mean that wallets are a bit lighter and that it’s time to be a bit more frugal when deciding on what to purchase.

Two major games coming out on the exact same day often leaves fans having to make a choice. Sure, there are some that will be unable to choose and opt to purchase both now or wait until they go on sale. But what do you do when you can’t have both and, for some reason, need to have at least one?

The good thing is that they’re very different games. That’s good for fans, as well as for the developers who want to sell tons of copies. If you’re not into open world RPGs, then Fallout 4 is not what you’re looking for. Yet Fallout, has the advantage of being multiplatform at the moment of launch. Rise of the Tomb Raider is on Xbox One, then Xbox 360, then PC a few months after, and finally on PlayStation 4 a whole year later (hopefully). For that game to have a successful launch, it needs the support of the Xbox One consumers. Fallout 4 is hitting from three fronts, so it can afford a bit of competition on one platform and that helps it out quite a bit.

Ultimately, the success of each of these highly anticipated games and whether or not one gets completely blotted out by the shadow of the other is entirely up to those who go out and make the decision. The release date for both is around the corner and each one is getting ready to wow players all around the world. The question is, which one is going to wow you? Is diving into another world with limitless possibilities your thing? Or, are you excited to see what Lara Croft is up to now that she’s ready to fully embrace her inner adventurer? Feel free to let us know in the comments below!