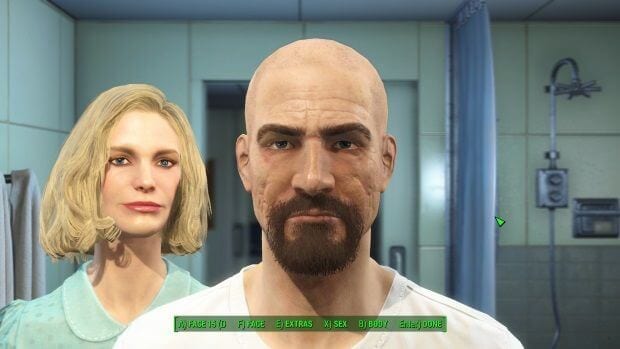 Fallout 4’s character creation tool brought a whole new level of customization to the series. Those who have a natural artistic talent will have found moving and modifying the size of jowls on the face a piece of cake, quickly and easily creating a character not too dissimilar to themselves.

Others, however, used the many different options available to them to create some pretty horrific looking characters. Scars, burns, and out of place features became a plenty in these monstrosities.

Then, we had a whole new level of creation expertise with those who have successfully sculpted like-for-like characters to their favorite celebrities.

While we accepted our slightly off-looking characters, these select few must have spent many hours intricately altering each tiny detail of these characters’ faces.

I mean, are we playing Witcher 3 here or something?

It was only a matter of time…

For wrestling fans who want to keep it old school, you can always go with the recently shamed legend.

This one is pretty much a perfect character to create in Fallout 4 considering his background in hunting down his kids.

When you spot that mysterious flash in the sky out in the wastelands, these two are the perfect duo to seek the truth.

Or, if you prefer to wander the wastelands as one of the most powerful men in the world.

Not a fan of Obama and his presidential style? May we suggest Putin instead?

If you want to live the life of a chem seller in the wasteland, is there anyone better to fill the role? Even Skylar got the Fallout 4 treatment!

Alternatively, if you’re a big Nintendo fan, you could always go for one Wario’s sidekick. Who knew Waluigi could be recreated so perfectly? That female Waluigi in the background really creeps us out, though.

For any Community fans out there, we think evil Abed would fit perfectly into Fallout 4.

And to round things off, our final entrant moved on from his huge Twitch stream success and wandered into the wasteland instead.

Have you made a really cool character in Fallout 4’s creation tool? Or have you stumbled across one on the internet? Let us know in the comments below.