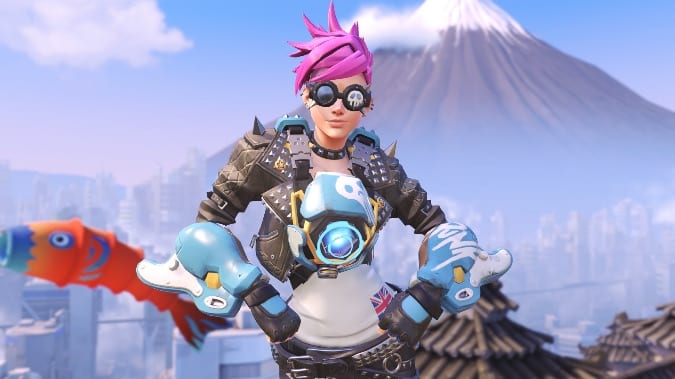 In Overwatch, you gain skins for the 21 characters to wear via loot boxes. Most of the skins are pretty silly, some actually show these characters in a different light or give you an idea of what they looked like years prior, but one thing’s for certain: they all look pretty good.

While Blizzard undoubtedly has plans for future skins for these characters, there’s no harm in thinking up some ones that they could include down the line. What costumes would you like the Overwatch characters to eventually wear? Let us know in the comments below.

Zarya is a well built woman, and her impressive muscles are already on display in her normal outfit. That said, even though she's not American, there's just something right about seeing the Overwatch character dressed as the powerful WWII female icon. Not to mention, replicating the iconic pose would be pretty awesome.

The genius gorilla of Overwatch may have more clothing than the Nintendo character, but there's nothing wrong with going commando every now and then. Sometimes, Winston just likes to give into his primal urges, and what's more primal than being stark naked with a tie around your neck? Plus, he could just use barrels as his jetpack!

Widowmaker may lack Bayonetta's gun heels, but she takes lives just as stylishly. Nothing wrong with the costume from the original game, but it may be best to go with the outfit from the sequel. Looks more fitting.

Symmetra would totally rock the Sailor look, and she'd wear it well. In the name of the Vishkar Corporation, she will punish you!

The Overwatch operative turned vigilante is definitely just Captain America with a Cyclops visor, so why not embrace that by having Jack Morrison wear the best onscreen Cap costume?

Roadhog and Junkrat both look like they stepped right off the set of Mad Max: Fury Road, so it only makes sense that the former don the clothes of the evil tyrant. Plus, Roadhog would finally have the sweet, luxurious hair that he's always dreamed of. Mediocre no more!

Admittedly, it'd hurt more to be hugged by Reinhardt than by Baymax. But you'd still look pretty great, swinging your hammer around like that. But maybe don't tell the other folks at Overwatch that you weren't satisfied with your care.

Hanzo already shares a name with the iconic Mortal Kombat ninja Scorpion, so why not also share fashion tips? It's a good thing the archer isn't also a skeleton with fire powers...

Where there's an Immortan, a War Boy has to follow, so why not the one who helped end Immortan Joe? Junkrat may lose the rest of his hair with this skin, but on the upside, he'll have some nice goggles!

Lucio's drawn a lot of comparisons to Jet Set Radio, which are all well and good. But something about his look screams "EDM", and a costume based on the famous French duo is more than appropriate for him. But maybe without the absurd helmets. Maybe.

The Overwatch shooter may dress like he belongs in a Western, but that doesn't mean he can't dress a little more with the times. If there's anyone who should dress like the Big Boss, it'd be McCree.

Mei is so cute and adorable, but she's also got a bit of a mean streak in her. Time for the scientist to let it go and show the world her cold heart.

Pharah is pretty much in a Gundam suit, give or take a few feet. Her missile barrage is just as deadly as a Vatras sword, so it's best to stay away from her looking like that.

Maul may not be full cyborg like the Overwatch ninja, but his red and black tattoos would look pretty good on Genji as some sort of stealth variant. Bonus points if his sword is also red to match the lights on his body.

Zenyatta could be viewed as some as "robot Dhalsim", so you might as well run with it. What he lacks in stretchy arms, he more than makes up for in garb.

D. Va is totally a Power Ranger (or a Jaegar pilot, depending on your POV). All she's missing is a flashy morph intro, but her Bunnyzord would make you forget that as it pummels you.

Torbjorn--Gimli (Lord of the Rings)

Overwatch's resident mechanic may not as warm and cuddly as everyone's favorite dwarf, but dressing like him would go a ways toward making that happen. Should probably not throw Torbjorn, though.

Let's be honest, if you took Tracer out of the context of the game, she would probably fit in just fine as a Time Lord. Her bubbly British personality makes her just like the recent incarnations of the Doctor (10 in particular), but she's also not afraid to get serious when the situation calls for it. Not to mention, she already has her own catch phrase and wouldn't look bad with a bow tie.

Mercy's been viewed as an angel, so why not give her the wings of a former archangel? She may not be liked by kids as much, though...

Ana's one hell of a shot, and even though Emily likes to do her killing up close and personal, they're both powerful women. Wearing Emily's scarf would be a good look for the elder Amari, since she's already decked out in jackets and hoods.

She's a hacker, so why wouldn't she dress like a computer program? She's already got the purple lining whenever she does her thing, so it only makes sense that she'd get a jacket that goes along with that motif.
Comments
Continue Reading
Related Topics:bastion, Costumes, feature, genji, overwatch, skins, sombra, tracer